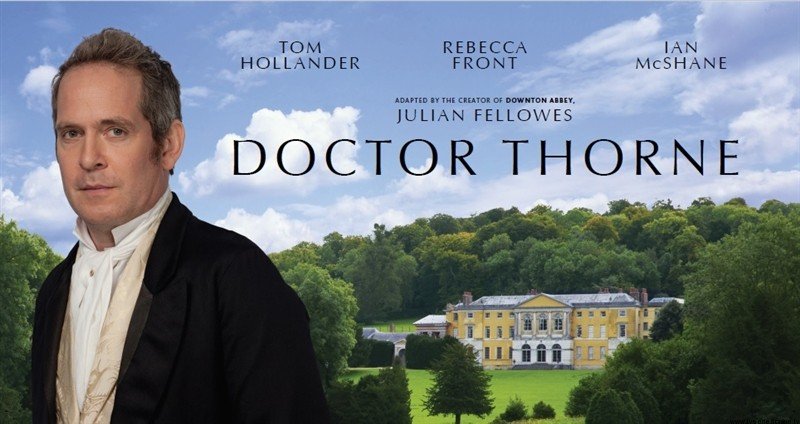 For Downton Abbey fans looking to fill the void, creator Julian Fellowes presents the mini-series Doctor Thorne, adapted from the Anthony Trollope novel about love, title, money, and marriage as a business deal in a fictional 19th century society remarkably similar to England. Tom Hollander is the titular Thorne and Stefanie Martini his niece whose circumstances of birth make her unmarriageable in a society that puts a premium on family name. Ian McShane, and Alison Brie co-star. The British drama makes its stateside debut on Amazon.

New York Times TV critic Mike Hale writes that it is “a minor canvas, compared with Downton Abbey, but Mr. Fellowes packs a lot of charm and amusement into its 160 minutes.” Fellowes also introduces each of the three episodes, Masterpiece Theatre style, in segments filmed for the Amazon presentation.

The Witch, subtitled “A New England Folktale,” is a primal horror film rooted in fear and superstition. A family of Puritans in the new world of 17th century America beset by hardships and tragedy become convinced that they’ve been cursed and it’s hard not to see every unsettling act of nature as a sign of evil. It’s dark and spooky and suggestive and leaves you wondering what’s real, what’s imagined, and how much belief guides our perceptions. Very creepy. R. Reviewed on Stream On Demand here.

Robert De Niro is Zac Ephron’s Dirty Grandpa in the R-rated comedy, which is now available in an unrated edition. Which means grandpa is even dirtier on VOD. De Niro must be proud. Also on DVD and Blu-ray.

Embrace of the Serpent, a dreamy and visually mesmerizing odyssey in black and white through the Amazon rainforest from Colombia, was an Oscar nominee for Best Foreign Film. Not rated, with subtitles.

Also new: the comedy Divine Access with Billy Burke and Patrick Warburton (not rated) and the jazz documentary Song of Lahore with Wynton Marsalis.

Available same day as select theaters nationwide is the mystery thriller Manhattan Night starring Adrien Brody as tabloid crime reporter and Yvonne Strahovski as a seductive widow with a tantalizing story (R) and the boxing drama Back in the Day with William DeMeo and Alec Baldwin (not rated).

Maria Bamford draws on her own life for Lady Dynamite: Season 1, a new Netflix original comedy about an L.A. stand-up comedian trying to move on from a breakdown. 12 slightly surreal episodes. “A show that relies so heavily on self-awareness has to have a beating heart and a big helping of humanity, and by focusing on Bamford’s mental health struggles, Lady Dynamite turns into something deeper, more challenging, and ultimately, more rewarding than a winking self-parody,” writes Joshua Alston for A.V. Club. Jenna Scherer profiles the show for Rolling Stone.

The high school drama A Girl Like Her (2015) uses the “found footage” style so popular in horror films to explore teen bullying. PG-13.

Slasher: Season 1 (2016), originally produced for the cable horror channel Chiller, is yet another attempt to turns slasher movie horror into a continuing TV series. 8 episodes.

Also from Britain (via the American cable channel AMC) comes Humans: Season 1, a drama set in a near-future world where some humanoid robots become self-aware. 8 episodes. Reviewed on Stream On Demand here.

For kids, there’s five seasons of the animated series The Busy World of Richard Scarry based on the popular storybooks. Keep your eyes open for the little yellow bug!

The PG-13-rated inspirational drama Where Hope Grows (2015) is also on Hulu.

Professor Brian Cox hosts The Science of Doctor Who (2013), which was originally presented as a BBC special.

Pan (2015), yet another take on the “Peter Pan” story, is a lavish fantasy that imagines the origins of the boy who never grew up with Hugh Jackman as Blackbeard and Levi Miller as Peter. PG.

Available Saturday, May 21 is the HBO original movie All the Way with Bryan Cranston as Lyndon B. Johnson.

The Stanford Prison Experiment dramatizes the real-life 1971 social behavior experiment that got terrifyingly out of hand. R.

The documentary Stretch and Bobbito: Radio That Changed Lives profiles the New York radio show that broke some of the biggest hip hop artists of the 1990s. R.