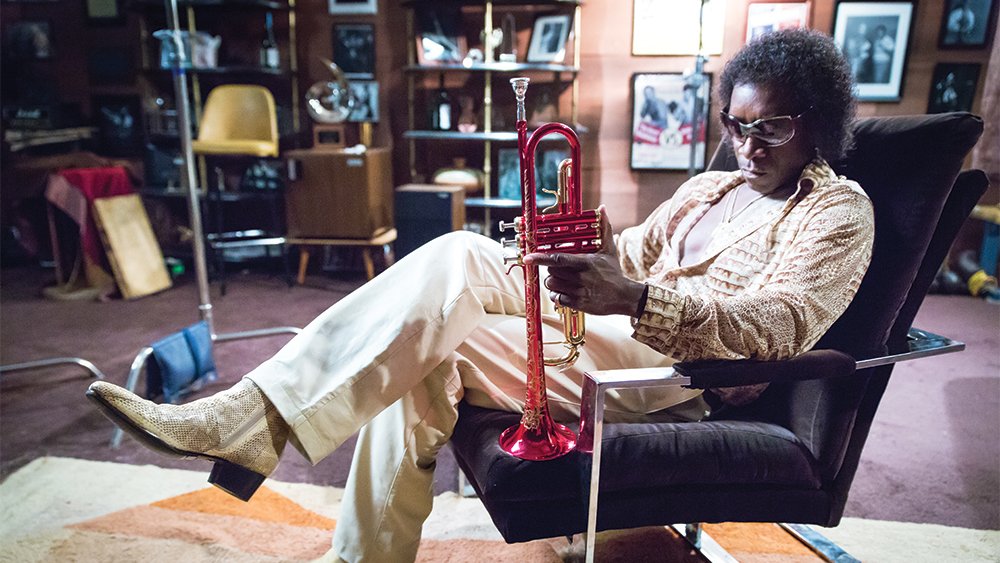 Batman v Superman: Dawn of Justice, the most bombastic and least self-aware superhero picture to date, pits the Dark Knight (Ben Affleck as an aging, rather bitter Batman) against the Man of Steel (Henry Cavill) with Lex Luthor (Jesse Eisenberg) pulling the strings of the smackdown. Wonder Woman (Gal Gadot) also gets in the fracas, which paves the way for the upcoming “Justice League” movie, DC’s attempt to create an interactive superhero universe like Marvel and its “Avengers” line-up. PG-13. Also on DVD and Blu-ray.

Don Cheadle directs, co-writes, and stars in the impressionistic (and at times completely fictionalized, or at least freely reimagined) biopic Miles Ahead as jazz legend Miles Davis during his lost years in the late 1970s. R. Also on DVD and Blu-ray and at Redbox.

Michael Shannon and Kevin Spacey are Elvis & Nixon in this comic reimagining of the real-life meeting between the two men. R. Also on DVD and Blu-ray and at Redbox.

The British drama Bridgend, a fictional take on the real-life teen and young adult suicides in remote Wales, stars Hannah Murray (Gilly on Game of Thrones) as a newcomer who gets caught up in the sense of hopelessness among the teens and the oppressive emotional toll of the suicides on the survivors. Not rated. Also on DVD.

The Norwegian disaster film The Wave (2015) watches the destruction when a fjord collapses and sends giant tsunami rushing through the narrows valleys to a resort town unprepared for the onslaught, despite the warnings of a geologist. R, in Norwegian with subtitles.

Me Him Her (2015), the feature directorial debut of screenwriter Max Landis (Chronicle, American Ultra), is a satirical comedy of youth culture and sexual identity in Los Angeles. Not rated.

Internet Famous (2016) parodies reality TV with a show about web celebrities competing for their own TV series. Not rated.

Streaming TV: The Netflix original animated series BoJack Horseman: Season 3 is definitely for adults. For kids, there the Netflix revival of the high school drama Degrassi: Next Class: Season 2 and the Disney Channel series Liv and Maddie: Season 3.

Embrace of the Serpent (2015), a Colombian odyssey through the Amazonian rainforest, was an Oscar nominee for Best Foreign Film. Not rated, with subtitles.

The Vatican Tapes (2014) stars Michael Peña as Catholic priest who calls in an exorcist to cast a demon out of a young woman (Olivia Taylor Dudley) and tapes the whole thing. PG-13. Also on Hulu.

Streaming TV: Vikings: Season 4 continues the pillaging in the first dramatic series from The History Channel.

The heist thriller miniseries The Last Panthers jumps from London to Marseille to Serbia. Six episodes and three languages, with subtitles. Reviewed on Stream On Demand here.

Bill Maher is adding extra Real Time episodes for the conventions and non-subscribers can also stream them live on YouTube or on Maher’s Facebook page the next day. The Republican Convention shows are now available, the Democratic Conventions stream live on Wednesday, July 27 and Thursday, July 28.

Also new: the debut of the new comedy series Vice Principals with Danny McBride and Walton Goggins and the second season premiere of Ballers with Dwayne Johnson now available.

The eight-episode comedy Cradle to Grave: Series 1, based on the autobiography of British broadcaster Danny Baker, stars Peter Kay, Lucy Speed, and Laurie Kynaston as Danny Baker. It makes its American debut on Acorn.