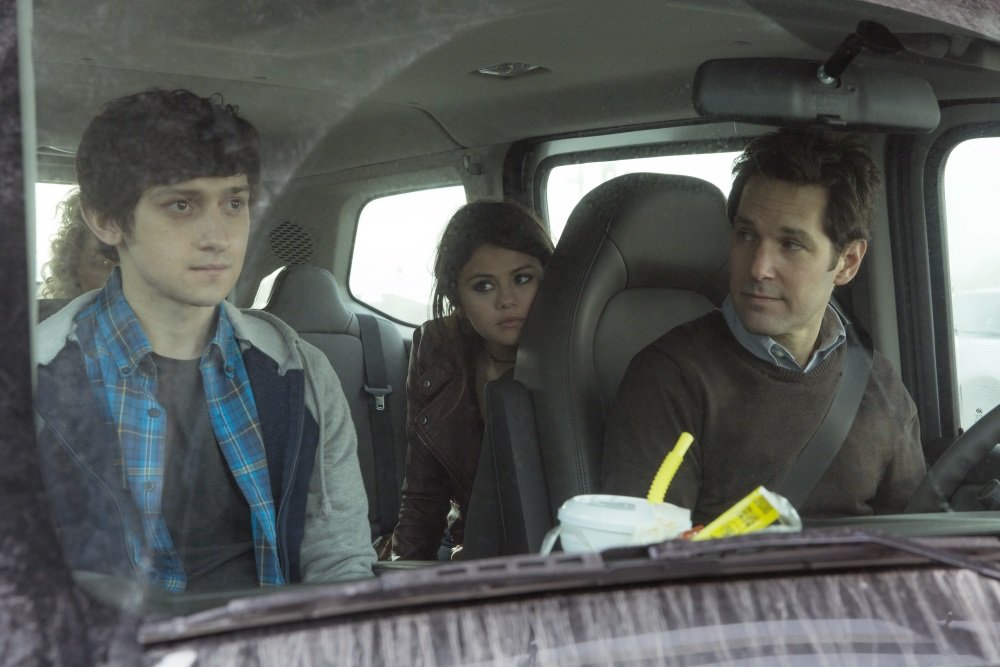 Paul Rudd stars in the American indie drama The Fundamentals of Caring (2016), playing a rookie caregiver who bonds with his 18-year-old charge (Craig Roberts). Adapted from the Jonathan Evison novel by writer-director Rob Burnett, it also stars Selena Gomez, Jennifer Ehle, and Bobby Cannavale. It was picked up after its Sundance debut and premieres on Netflix, skipping theaters entirely. Los Angeles Times critic Gary Goldstein calls it “a strained, overly familiar tale of catharsis and redemption.” PG-13.

is a mix of science fiction odyssey and conspiracy thriller grounded in the devotion of a father (Michael Shannon) determined to save a son with inexplicable powers from everyone who would exploit him. An intimate and moving alternative to the bombastic superhero adventures dominating the movies. Joel Edgerton, Kirsten Dunst, and Adam Driver co-star. PG-13. Also on Blu-ray and DVD. Reviewed on Stream On Demand.

, a film that attempts to milk more comedy out of gay panic, sodomy, and bestiality than you ever thought possible. R. Includes bonus outtakes.

with Ethan Hawke and Paul Giamatti (not rated), the drama Septembers of Shiraz

with Salma Hayek and Adrien Brody (PG-13), and the western The Duel

The natural history series Life Story: Series 1 (2014), produced by BBC and Discovery Channel, charts the journey from birth to adulthood throughout the animal kingdom. 6 episodes.

For the kids there’s the animated series Dragons: Race to the Edge: Season 3 and the Disney channel shows Bunk’d: Season 1 and Best Friends Whenever: Season 1.

The seventh and final season of The Good Wife: Season 7, which concluded last month, is now available, which means the entire series is on both Amazon Prime and Hulu. More on Stream On Demand here.

Brie Larson won the Oscar for Best Actress in Room (2015), the stirring drama of a young mother who devotes herself to nurturing the spirit of her young son while help captive, transforms a potential horror story into a celebration of love and courage. R. Reviewed on Stream On Demand here.

Adam Sandler harnesses the boy-man persona of his crude comedies for Punch Drunk Love (2002), a role written for him by filmmaker Paul Thomas Anderson for this unexpected and offbeat romantic comedy with dark edges. R.

Southbound (2015) is another anthology horror film, with five stories told by travelers in the desert. R.

Spring in a Small Town (China, 1948) was voted The Greatest Chinese-Language Film of All Time by the Hong Kong Film Critics Society in 2002 and the Hong Kong Film Academy in 2004, which I guess makes it official. Unfortunately the version available on Amazon Prime (courtesy of Cinema Epoch) is standard definition and in need of restoration, or at least remastering. Mandarin with English subtitles.

The first episode of the eight-part limited series The Night Of officially premieres on cable on Sunday, July 10 but subscribers can watch it now on HBO Now, HBO Go, and HBO On Demand. Created by Oscar-winning writers Steven Zaillian and Richard Price and starring John Turturro and Riz Ahmed, the eight-hour drama follows a complex murder case in the New York City through the investigation, the legal proceedings, and the incarceration of the accused at Rikers Island as he awaits trial.

The new sports talk show Any Given Wednesday with Bill Simmons debuts this week, with new episodes every Wednesday.

And on Sunday, June 26, the final episodes of Game of Thrones: Season 6, Silicon Valley: Season 3, and Veep: Season 5 debut.

Alison Brie and Jason Sudeikis star in the R-rated romantic comedy Sleeping with Other People (2015).

Hong Sang-Soo’s Right Now, Wrong Then (South Korea, 2016) streams exclusively on Fandor as it opens in theaters in the U.S. Not rated, with subtitles.

Raised by Wolves: Series 1, a raunchy comedy of family dysfunction written by and based on the childhood of noted British author Caitlin Moran, makes it American debut on AcornTV. 6 episodes.