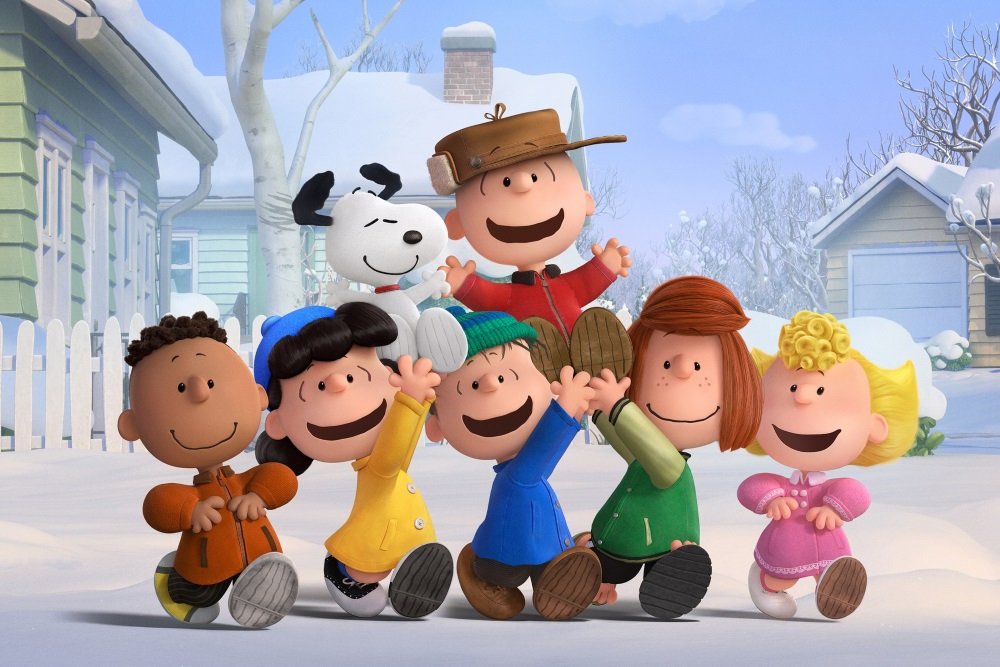 The Peanuts Movie brings Charlie Brown, Lucy, Linus, Schroeder, Peppermint Patty, Snoopy, and the rest of the gang from Charles M. Schultz’s beloved comic strip (and endless TV specials) back to the big screen with the magic of 3D computer animation, but don’t worry about updating the classic. The adults still speak with wah-wah voices and Dr. Lucy Van Pelt dishes advice for a mere 5¢. Rated G for all audiences.

In the Heart of the Sea tells the true story of Essex, a whaling ship destroyed by mammoth whale in 1820, and the harrowing lengths they went to survive. Chris Hemsworth stars and Ron Howard directs the seafaring epic. Available in 3D from some providers. PG-13.

Michael Fassbender is Macbeth and Marion Cotillard his Lady in the latest big screen version of The Scottish Play. R.

Also new: the drama Of Mind and Music with Joaquim De Almeida as a neurologist and Aunjanue Ellis as a New Orleans jazz singer with Alzheimer’s (PG-13) and the straight-to-VOD comedy sequel Punk’s Dead: SLC Punk 2 (not rated).

Will Arnett is a recovering alcoholic with a con man’s patter and a life slowly unraveling in the new Netflix original comedy Flaked: Season 1. 8 half-hour episodes now available.

Also new is the original skit series Netflix Presents: The Characters: Season 1, which lets each member of a troupe of eight comedians take charge of one show in the series. 8 episodes.

For the kids, there are the returning animated shows Dinotrux: Season 2, Digimon Fusion: Season 2, and Popples: Season 2.

More streaming TV: Cuckoo: Seasons 1-2 is a British comedy with Andy Samberg as an American slacker married into a British family and The Returned: Season 1 is the only season of the American version of the French un-zombie drama of the dead coming back to life.

Based on a short story by Alice Munro, Hateship Loveship (2013) stars Kristen Wiig as a nanny to Hailee Steinfeld, who tries to set her up with her recovering addict father Guy Pearce. R.

Far less serious is Hell and Back (2015), an animated comedy featuring the voices of Mila Kunis, Danny McBride, and Bob Odenkirk as The Devil. R.

Also new: the German heist thriller Victoria (2015), a film shot in a single, unbroken take (not rated), and The Forbidden Room (2015), Guy Maddin’s anthology of surreal stories and luscious images (not rated).

Bosch: Season 2, the Amazon original series based on the novels of Michael Connelly, sends LAPD Det. Harry Bosch (Titus Welliver) to Las Vegas on a new murder investigation, where his ex-wife and daughter get caught up in the violence of a mob-connected murder. It’s the closest thing that any TV program has come to capturing the lean, tough quality of modern American police detective fiction. 10 episodes.

Christopher Nolan’s Insomnia (2002), starring Al Pacino as a Los Angeles police detective in Alaska tormented by guilt and kept awake by 24-hour sunlight, is a rare remake (the original was from Norway) that is more interesting and nuanced than the original. R. Reviewed on Stream On Demand here.

Also new and interesting: the Oscar-winning All the President’s Men (1976) with Dustin Hoffman and Robert Redford (PG), the Coen Bros.’ screwball The Hudsucker Proxy (1994) with Tim Robbins (PG), and the World War II thriller Valkyrie (2008), about the real-life plot to assassinate Hitler, starring Tom Cruise and Kenneth Branagh (PG-13)

A Girl in the River: The Price of Forgiveness, this year’s Oscar winner for Best Documentary Short Subject, explores the horrific culture of honor killing in Pakistan. No rating.

Tim Burton takes on the strange true story behind the kitschy paintings that became a pop culture phenomenon in the sixties in Big Eyes (2014), starring Amy Adams and Christoph Waltz. PG-13. Reviewed on Stream On Demand here.

Available the same day as its theatrical rerelease, River of Grass (1994) is the debut feature by Kelly Reichardt. Lisa Bowman and Larry Fessenden are shaggy slacker outlaws who never get around to actually committing crimes but go on the run anyway in this American Indie take-off of the road movie crime genre. The film was nominated for four Independent Spirit Awards and Reichardt went on to direct (among other films) Meek’s Cutoff (2010) and Night Moves (2013). Not rated.