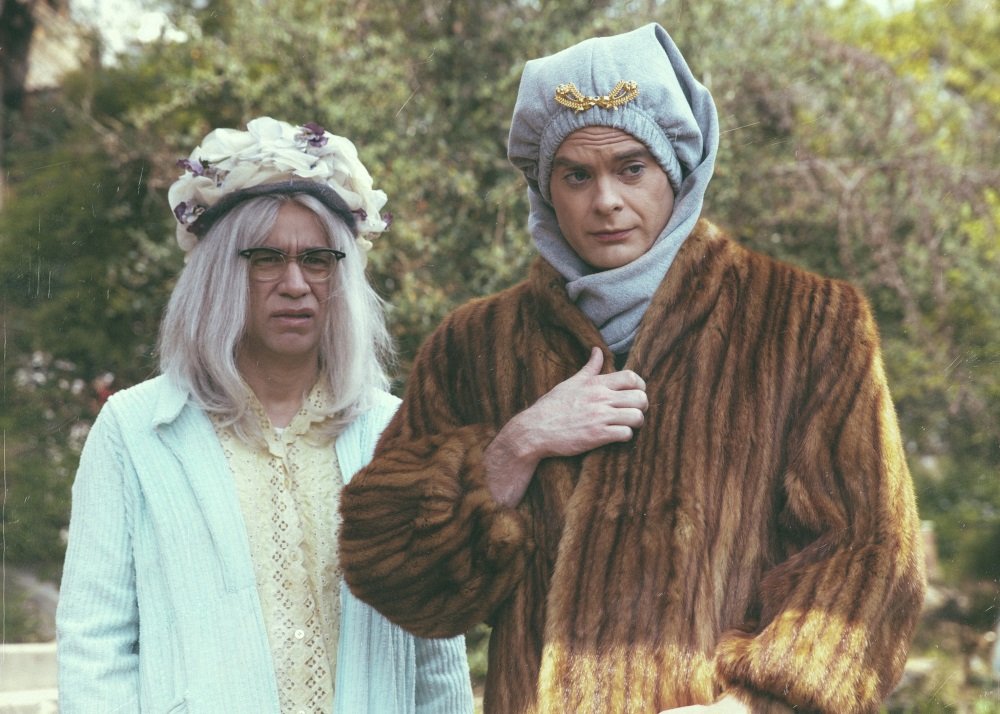 Fred Armisen and Bill Hader team up to take on parodies of documentary filmmaking in Documentary Now!: Season 1, created for IFC (home of Portlandia, which was co-created by Armisen).

It’s mockumentary 101, taking on not just the form but the great documentaries themselves. Episode one is a pitch-perfect spoof of “Grey Gardens,” with Armien and Hader in drag as “Big” Vivvy and “Little” Vivvy Van Kimpton and the camera floating through with the cinema verité intimacy and immediacy of the Maysles’ filmmaking style. And so it goes through to the two-part finale, a send-up of the Behind the Music-style rock doc profiling the soft-rock phenoms Blue Jean Committee (with Armisen and Hader headlining the seventies groovsters). The icing on the cake: the series is hosted in all mock-seriousness by Helen Mirren.

Netflix now has all seven episodes of the first season available to stream. Queue ’em up!

Jennifer Lawrence’s fury and passion sustain The Hunger Games: Mockingjay – Part 2, the fourth and final film in the young adult franchise of teen gladiators-turned-rebel liberators. It drags the last book out with extended battles and too much talk but it’s faithful to the grim tone and fatal twists of the source. PG-13. Reviewed on Stream On Demand here.

In Daddy’s Home, smooth jazz step-dad Will Ferrell is repeatedly humiliated by his wife’s macho, swaggering ex-husband (Mark Wahlberg) in front of his kids. I guess that’s what passes for family comedy today. PG-13.

Available same day as select theaters nationwide is the college graduate comedy Get a Job with Miles Teller and Anna Kendrick (R) and the baseball documentary Fastball, narrated by Kevin Costner (no rating).

Martial arts movie superstars Jackie Chan and Jet Li team up for their first and only time in the action fantasy The Forbidden Kingdom (2008), an American take on the classic Chinese “Monkey King” tale. PG-13 but aimed at adolescents and teens. Reviewed on Stream On Demand here.

The documentary Batkid Begins (2015) chronicles how San Francisco became Gotham City for a day to give a five-year-old boy with leukemia a Batman adventure in a “Make-A-Wish” event. A feature film is in development. Not rated.

Kung Fu Panda: Secrets of the Scroll is a 23-minute animated short that reveals the origins of the Furious Five. Not rated.

More non-fiction: The Art of Organized Noize (2016) is a Netflix original documentary on the acclaimed hip-hop producing team and The Pearl Button (2015) explores Chile’s long history with the sea (the latter in Spanish with subtitles). Not rated.

Streaming TV: The British crime drama Happy Valley: Season 2 and the kids show VeggieTales in the House: Season 3 are exclusive to Netflix.

The British mini-series Arthur & George (2015) spins a true story of Arthur Conan Doyle’s efforts to clear the name of a wrongly-convicted man into a Holmes-like mystery. Reviewed on Stream On Demand here.

Tatiana Maslany is superb in multiple roles in the clone conspiracy drama Orphan Black: Season 3, though the story around her gets a little muddled this season. 10

Michael Douglas is an arrogant American big game hunter chasing human prey in the Mojave Desert in the thriller Beyond the Reach (2014), which is also on Hulu. R and unrated versions.

Pitch Perfect 2, the sequel to the surprise musical hit about a cappella competition on the college level, sends Anna Kendrick, Rebel Wilson, and the rest of the Barden Bellas to an international competition for a new round of romance, goofy antics, and friendship through harmonizing. PG-13.

The documentary Everything is Copy is a portrait of Nora Ephron by her son, Jacob Bernstein.

Available on Saturday, March 26 is the comedy remake Vacation with Ed Helms.

Spring Broke is a documentary on the history and legacy of spring break craziness at Daytona from the sixties to the present. Not rated, adult content.

The British mystery series Vera: Series 6 starring Brenda Blethyn as the caustic DCI debuts stateside on this streaming service before it heads to public television. New episodes of the four-episode series arrive on successive Mondays.

Pingback: My Homepage
Comments are closed.