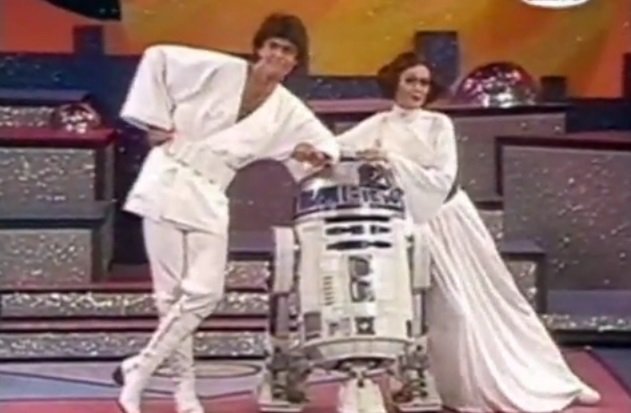 The new Star Wars Episode VII trailer is all the buzz right now, but have you seen this musical tribute to the original Star Wars from the Donny and Marie, the seventies variety show starring Donny and Marie Osmond and produced by Sid and Marty Krofft?

It’s the big finale from the third season premiere and it stars Kris Kristofferson as Han Solo, Redd Foxx as Obi Wan, and Paul Lynde as Grand Moff Tarkin, plus dancing stormtroopers! And apparently that’s really Anthony Daniels and Peter Mayhew in the C-3PO and Chewbacca costumes; can’t say for sure about R2D2 and it’s pretty clear that’s not David Prowse in the Darth Vadar armor.

The real question here is: did these guys know something we didn’t when they cast brother-and-sister team Donny and Marie as Luke Skywalker and Princess Leia? Or did they simply not notice?