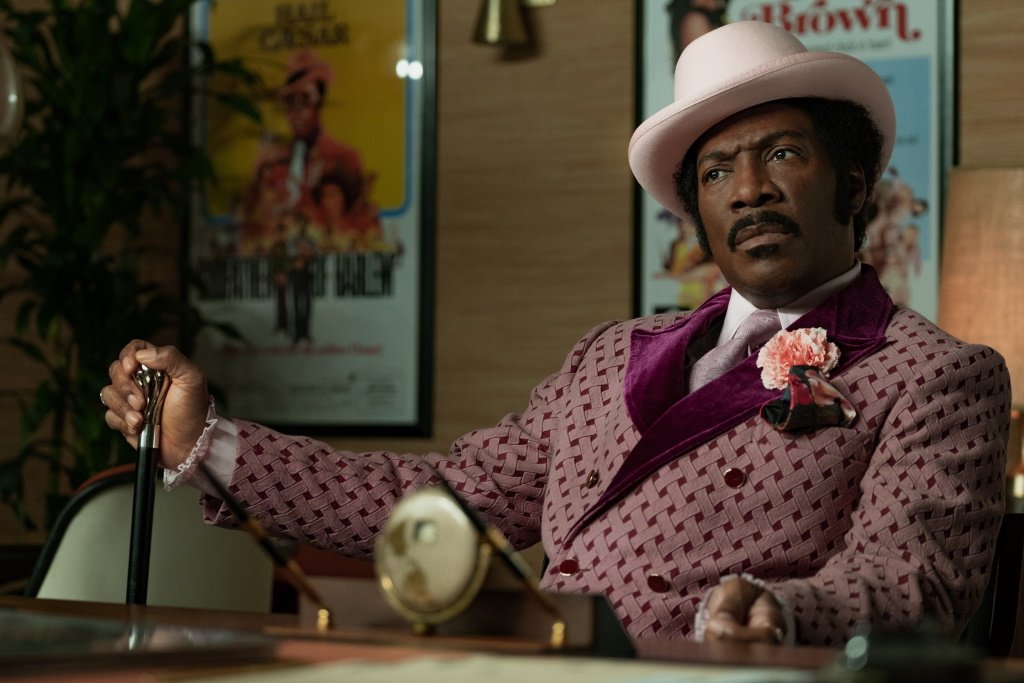 Disney brings photo-realistic 3D animation to its remake of the animated musical “The Lion King” (2019, PG), featuring the voices of Donald Glover, Beyoncé, and James Earl Jones (reprising his role as Mufasa). Critics found the adaptation lackluster but audiences embraced it and made it one the year’s biggest hits. Jon Favreau (“The Jungle Book”) directs and Seth Rogen, Billy Eichner, Chiwetel Ejiofor, and Alfre Woodard costar. On Cable On Demand and VOD, also on DVD and at Redbox.

Eddie Murphy takes on his best role in years in “Dolemite Is My Name” (2019, R) as the notorious comedian and rap pioneer Rudy Ray Moore, who adopted the flamboyant alter-ego Dolemite in his nightclub act and low budget movies in the 1970s. Directed by Craig Brewer (“Hustle & Flow”) from a script by Scott Alexander and Larry Karaszewski (“Ed Wood,” “Man on the Moon”), it comes direct to Netflix from a brief theatrical run.

“Watchmen” reimagines Alan Moore’s groundbreaking graphic novel as a dystopian nightmare thirty years later, in a U.S. simmering with unrest where police have to don masks. This dense, dark, complex take on the superhero genre was developed for HBO by Damon Lindelof (“Lost”) and stars Regina King, Jeremy Irons, and Don Johnson. New episodes Sunday nights on all HBO platforms.

Helen Mirren is “Catherine the Great” in the lavish four-part miniseries about the Russian monarch. New episodes Monday nights on all HBO platforms.

And remember that Shudder is devoted to horror movies and TV, including Shudder Original anthology series “Creepshow,” the gory thriller “Haunt” (2019, R) from the writers of “A Quiet Place,” and British Gothic horror “Gwen” (2019, not rated) with Maxine Peake. You can try a free 7-day trial at shudder.com.

Available same day as select theaters nationwide is “The Kill Team” (2019, R), a military drama based on a true story, starring Nat Wolff and Alexander Skarsgård.

A mother (Carmen Ejogo) must murder a stranger to save the life of her dying daughter in the thriller “Rattlesnake” (2019, not rated).

Natalie Portman directs and stars in “A Tale of Love and Darkness” (Israel, 2015, PG-13, with subtitles), adapted from the autobiographical novel by Amos Oz set during the birth of Israel.

More streaming TV: Michael Douglas and Alan Arkin are back in the comedy “The Kominsky Method: Season 2.” Also new:

True stories: “It Takes a Lunatic” (2019, not rated) profiles acting teacher Wynn Handman, whose students include Denzel Washington, Christopher Walken, and Joanne Woodward and “Dancing with the Birds” (2019, not rated) observes mating rituals in the avian world.

Kid stuff: Halloween special “Just Add Magic: New Protectors” and the animated “If You Give a Mouse a Pumpkin.”

Vera Farmiga and Patrick Wilson return in “The Conjuring 2” (2016, R) to investigate a haunting in London.

The five-part true crime series “Leavenworth” (TV-MA) examines the story of First Lt. Clint Lorance, who was court-martialed for the murder of Afghan civilians. On Starz cable and streaming, with new episodes each Sunday. Also on Starz is the documentary “The River and the Wall” (2019, TV-14).

Jessica Biel plays a journalist investigating the disappearance of over 300 people at a research community in Tennessee in “Limetown,” adapted from the podcast created by Zack Akers and Skip Bronkie. Four episodes available, new episodes each Wednesday.

Morven Christie is a cop in a small seaside town investigating a disappearance in “The Bay: Season 1,” a British crime drama with echoes of “Broadchurch.” It makes its U.S. debut on Britbox, new episodes each Tuesday. Also new at Britbox is the comedy “Blandings” (2013-2014) with Timothy Spall and Jennifer Saunders, a series based on the stories of P.G. Wodehouse.

Also new to Criterion Channel is “Directed by Errol Morris,” a collection of seven documentaries, including the deadpan cult classic of eccentric Americana “Vernon, Florida” (1981, not rated) and the Oscar-winning “The Fog of War” (2003, PG-13) with Robert S. McNamara, plus a selection of archival interviews with Morris.

Kanopy is a free streaming service available through most library systems.