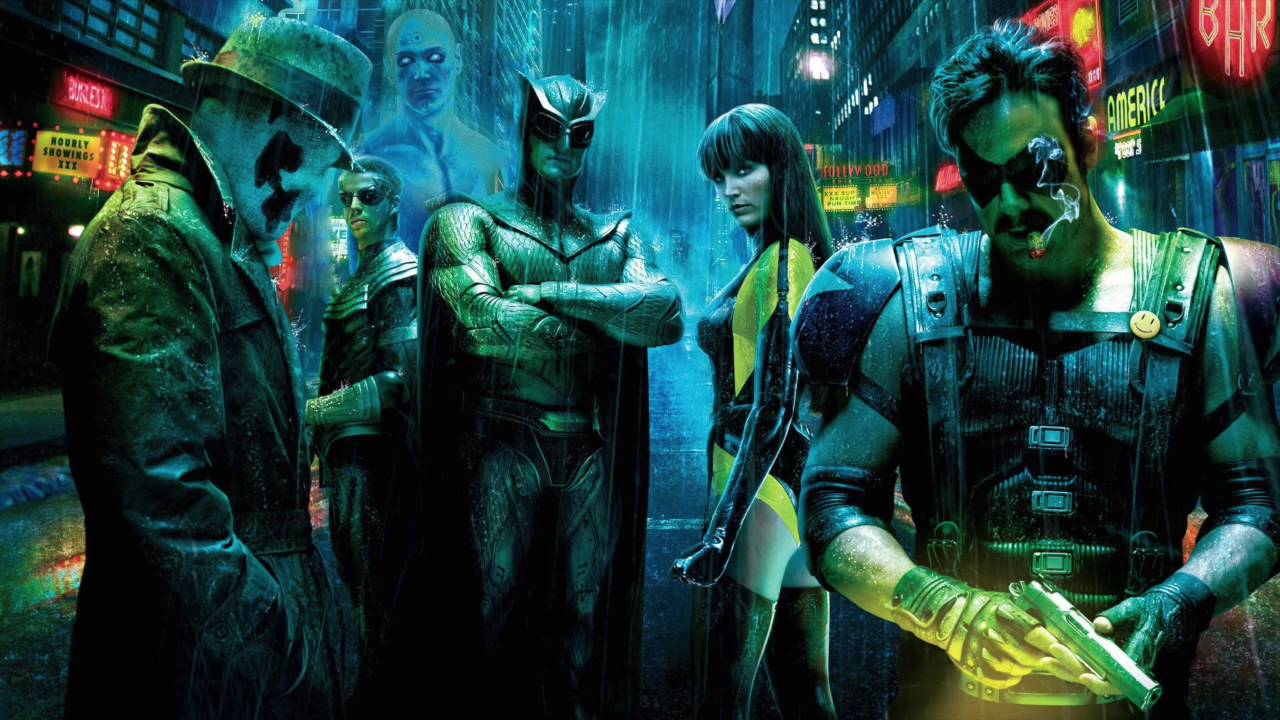 Zach Snyder delivers perhaps the most faithful adaptation of Watchmen (2009, R), the landmark graphic novel by writer Alan Moore (uncredited on screen, as is his tradition) and artist Dave Gibbons, that anyone could hope for.

Moore’s story reimagines the history of comic book superheroes in the real world of global politics and complicated (and at times psychotic) psychologies and his original characters echo familiar icons of the DC Universe (right down to the “Justice League”-like team). It wasn’t necessarily new when it was written in the 1980s and is certainly not now, but the execution of the graphic novel pushes every element of the conception to mythic and apocalyptic dimensions while acknowledging the psychosis driving so many of the characters. Snyder, a comic book fan, is as slavishly faithful as possible to Moore’s original work, from the opening murder of the brutal, bloodthirsty Comedian (Jeffrey Dean Morgan) to recreations of Gibbons’ artwork in key scenes.

Snyder gets the schizoid conviction and moralistic hysteria of Old Testament avenger Rorschach (perfectly embodied by Jackie Earl Haley right down to his throaty, phlegmy “hrrrmmm”), a Batman-like character on the edge of insanity; the vestiges of human emotion struggling with existential disconnection in Dr. Manhattan (Billy Crudup), a scientist whose very atoms have merged with the universe and given him unlimited power and a god-like perspective on the world; and the arrogance and false piety of industrialist gazillionaire Adrian Veidt (Matthew Goode), aka Ozymandias, the smartest man in the world, whose show of suffering for all the souls he kills is a piece of theater he stages like a martyr. There’s also Nite Owl (Patrick Wilson), a fifties-style science hero with a veritable Batcave filled with his inventions, and Silk Spectre (Malin Akerman) following in the footsteps of her mother (Carla Gugino), who was the superheroine pin-up of her generation.

The story of costumed superheroes into the real world offers a visual spectacle to be sure, but it emphasizes the “novel” in graphic novel: narrative complexity, character dynamism, the density of fiction and history and commentary swirling together. It swirls with metaphysics and meta-storytelling but also digs into the psyches and complicated relationships between the characters. Snyder streamlines the story, judiciously editing out subplots and side-stories, and he even dares to change the details of Moore’s original ending, twisting it with an insight so perceptive that one wonders if Moore would have done the same had it occurred to him, so beautifully does it wrap itself within the self-contained mythology and the character dynamics.

In the age of big screen superhero spectacle, Watchman is still something special, a film that privileges mystery and conspiracy and deeply damaged or confused characters over endless scenes of CGI battles. It is not the best comic book movie ever—it is more compelling than exciting and lacks the urgency and passion and dynamism of Nolan’s Batman movie or the best of the Marvel universe—but it’s deep dish storytelling and offers a fascinating take on costumed heroes that no other big-budget movie has grappled with. Not even Snyder’s own subsequent Batman v Superman: Dawn of Justice or Justice League. And for that it has earned its place in the comic book movie pantheon.

The Director’s Cut, which runs 24 minutes longer than the theatrical version, delves even deeper into the characters and the culture of their world and is works well in the home video setting, where it’s easier to settle in to a longer experience. Watchmen: The Ultimate Cut weaves in animated sequences of the “Tales of the Black Freighter” comic book featured in the graphic novel (frankly, I don’t think it works in the context of the feature). At this time, they are only available on disc and VOD.

The theatrical version is available in a single-disc edition with no supplements and the longer Director’s Cut is on the DVD Special Edition and Blu-ray edition.

The most obvious additions to the Director’s Cut are the death scene of Hollis, the original Nite Owl (it’s a beautifully executed scene that perfectly translates the scene from the novel), and scenes of Nixon and his cabinet contemplating a first strike as the Cold War moves closer to going nuclear. But just as enriching are the little character bits laced through the film and the added length provides more time to reflect on the characters, their motivation and their fractured psyches: not just the schizoid conviction and moralistic hysteria of Old Testament avenger Rorschach and the sadistic psychosis of the Comedian, a brutal Fascist beating and murdering whoever he can under the facade of patriotism, but the growing disconnection of Dr. Manhattan and quantum logic that makes him both everywhere at once and tied to the moment of human experience, and the God complex and false piety of Ozymandias, who manages to profit from his plan to save mankind. It’s a thoughtful film swirling with metaphysics and meta-storytelling and I find that those dimensions come through even better on home video, which is well suited to slower narratives filled with novelistic detail. The longer cut delivers just that.

The featurettes are not as interesting or detailed as the film’s fans might hope for (and of course author Alan Moore is completely absent from any and all supplements). The 28-minute “The Phenomenon: The Comic That Changed Comics” is a decent survey of the origins and impact of the original graphic novel and the 17-minute “Mechanics: Technologies of a Fantastic World,” with physicist James Kakalios (an unofficial scientific adviser on the film), looks at the science behind the fiction, but neither are all that revelatory. Exclusive to the Blu-ray edition is the “Immersive WB Maximum Movie Mode,” which adds a twist to the familiar interactive audio-video track of little featurettes, interviews, behind-the-scenes footage, storyboards and comic book panels popping in the screen. This mode is most effective when Zach Snyder literally steps into the frame to discuss a scene in depth, at times stopping and rewinding to pick out details and illustrate his points.