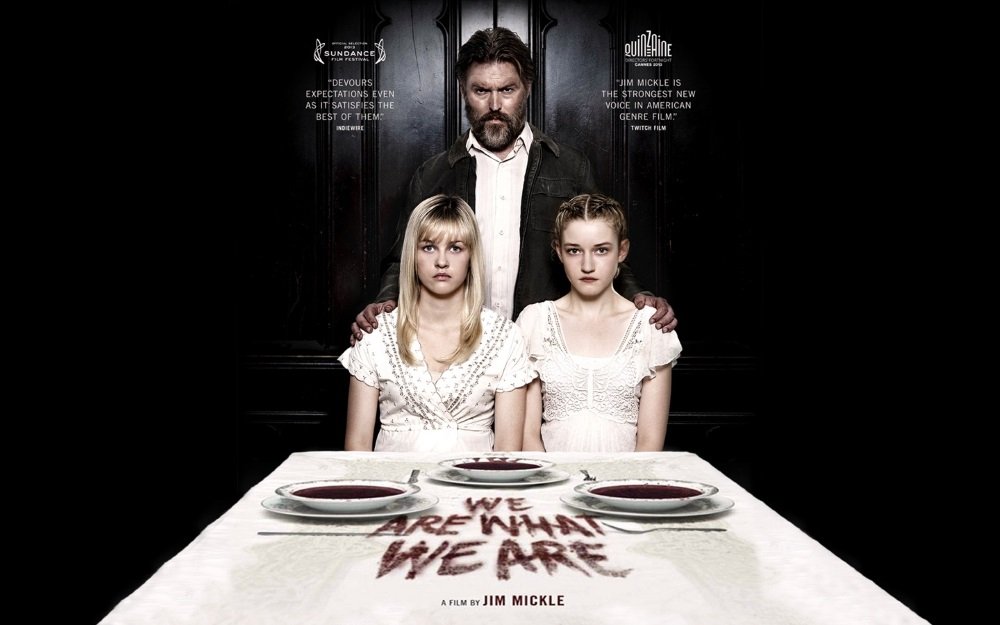 We Are What We Are (2013), Jim Mickle’s remake of the Spanish film of the same name, is a horror film by definition—an isolated family in rural America cloisters its teenage daughters in a religion/ritual that reaches back to their starving forefathers who turned to cannibalism to survive a harsh frontier—but a family drama at heart.

Bill Sage is the ominously protective father who serves as a severe keeper of tradition with glowering tough-love strictness while the two girls just want to fit in with the world outside. We’re not talking hanging at the mall and getting cute new outfits, mind you, just participating in the social world of their school peers. When mom suddenly dies (the tremors that presaged her collapse are rippling through dad as well) the pressure is on the eldest daughter (Ambyr Childers) to carry on the ritual, which involves blood, butchery, and someone kept captive in the workshop basement.

To Dad, the world outside threatens to distract his family from their traditions, which has a hold on him like a strict, unforgiving religion. But this is a way of life that is literally killing them—the disease running through the family tree is a direct result of consuming human flesh—before you even account for the tremendous guilt put upon teenage girls being prepared to slaughter their first human victim.

Given that build-up, the film is intimate and poignant, a human story of growing up and yearning to be like everybody else in cloistered culture that demands strict obedience and violent defense.

and other services and on disc:
We Are What We Are [DVD]

We Are What We Are [Blu-ray]