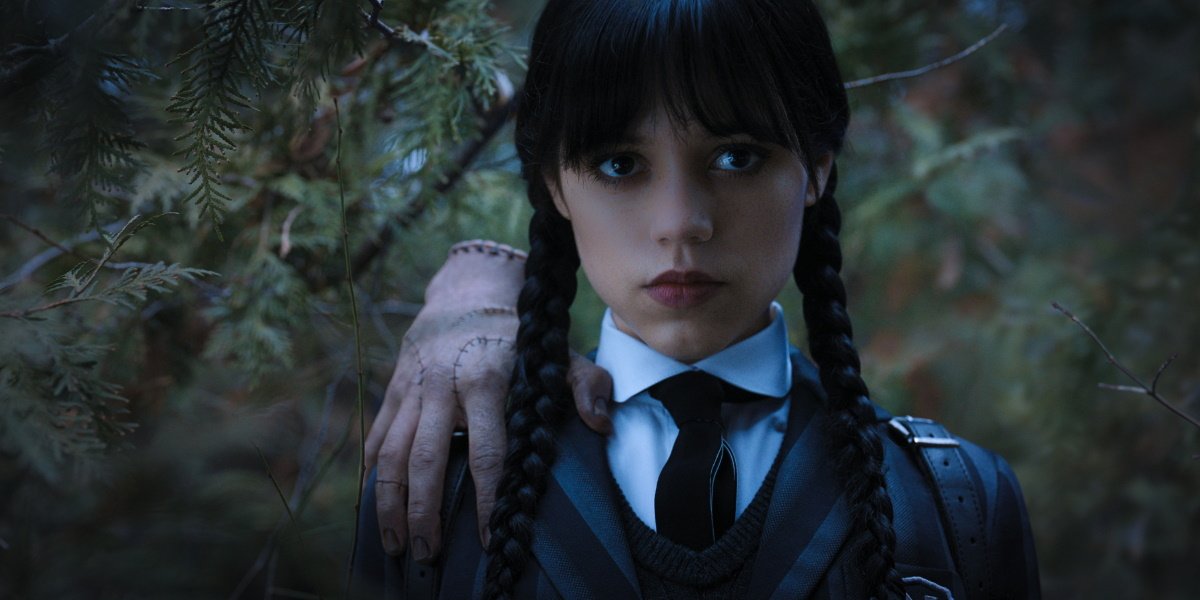 Jenny Ortega stars as the original Goth girl in “Wednesday: Season 1” (TV-14), a comedy centered on the eldest child in the Addams Family. She’s ideal casting, deadpan and macabre with a wickedly dark sense of humor, and finds herself just as out of place when she’s sent to an exclusive academy for children of the supernatural variety. Gwendoline Christie, Riki Lindhome, and Emma Myers costar in the series created by Alfred Gough and Miles Millar and produced and directed by Tim Burton. Catherine Zeta-Jones and Luis Guzmán play parents Morticia and Gomez. (Netflix)

True stories: the heartwarming documentary “Good Night Oppy” (2022, PG) explores the journey and the accomplishments of Opportunity, the rover sent in 2003 to explore the surface of Mars for a 90-day mission that lasted 15 years, with interviews with the human crew and special effects recreating the robotic mission on Mars. (Prime Video)

With Thanksgiving dinner relegated to leftovers, the Christmas season begins in earnest and the holiday movies arrive in force. Hulu spotlights its new original movies, along with holiday-themed shows and Christmas episodes of TV series, on its Holidays Hub, and Peacock features Hallmark holiday movies and shows on its Hallmark page.

“The Swimmers” (2022, PG-13) dramatizes the true story of Yusra and Sarah Mardini, sisters who fled war-torn Syria and went on to swim in the 2016 Rio Olympics.

Morgan Freeman narrates “Our Universe” (TV-PG), a limited series natural history documentary that explores the forces that shape the universe and life on Earth.

Jake Gyllenhaal is a hot-headed boxer who suffers a tragic loss in “Southpaw“ (2015, R), costarring Rachel McAdams and Forest Whitaker.

Gerard Butler and Peter Mullan are lighthouse keepers who stumble upon a small fortune in on a remote Scottish island in “The Vanishing“ (2018, R).

“The Boxtrolls“ (2004, PG) is a delightfully oddball stop-motion fantasy about mischievous trolls who scavenge discarded objects from the streets of a storybook town.

International passport: the survivor of a massacre wakes up after years in a coma and tries to piece together his lost memories in “The Lost Patient“ (France, 2022, TV-MA, with subtitles).

A woman (Karen Gillan) clones herself and then has to fight a duel to the death to see which one is allowed to live in the science fiction thriller “Dual“ (2022, R).

The documentary “Love, Lizzo“ (2022, TV-MA) profiles the life and odyssey of the Grammy-winning superstar and the documentary series “Shaq: Season 1“ (not rated) chronicles basketball legend and his rise to superstardom.

A 13-year-old girl goes on a road trip with her adoptive parents to find her mother in the family comedy “Daddies on Request: Season 1“ (Mexico, not rated, with subtitles).

Peter Dinklage takes the lead in “Cyrano“ (2021, PG-13), a musical adaptation of the classic play by Edmond Rostund about a soldier who helps a young man woo the woman he loves.

Streaming TV: the sixth and final season of “Animal Kingdom“ (TV-MA) brings the saga of the criminal Cody family to an end.

A therapist (Sosie Bacon) has to confront her traumatic past after seeing terrifying visions in the eerie horror film “Smile“ (2022, R).

In the family comedy “Fantasy Football“ (2022, TV-PG), a girl can magically control her football player father (Omari Hardwick) through a video game.

Overachieving best friends (Kaitlyn Dever and Beanie Feldstein) throw caution to the wind on the last night of high school in the raunchy and smart buddy comedy “Booksmart“ (2019, R).

The true crime documentary series “Once Upon a Time in Londongrad“ (2022, TV-MA) looks at a series of deaths on British soil that may be traced back to Russia.

A 115-year-old vampire discovers he has a daughter in the horror comedy “Blood Relatives” (2022, not rated) from writer/director/star Noah Segan. (AMC+ and Shudder)

Five films “Starring Veronica Lake” include the superb Hollywood comedy “Sullivan’s Travels“ (1941) with Joel McCrea and all three films she made with Alan Ladd, including “The Blue Dahlia“ (1946).