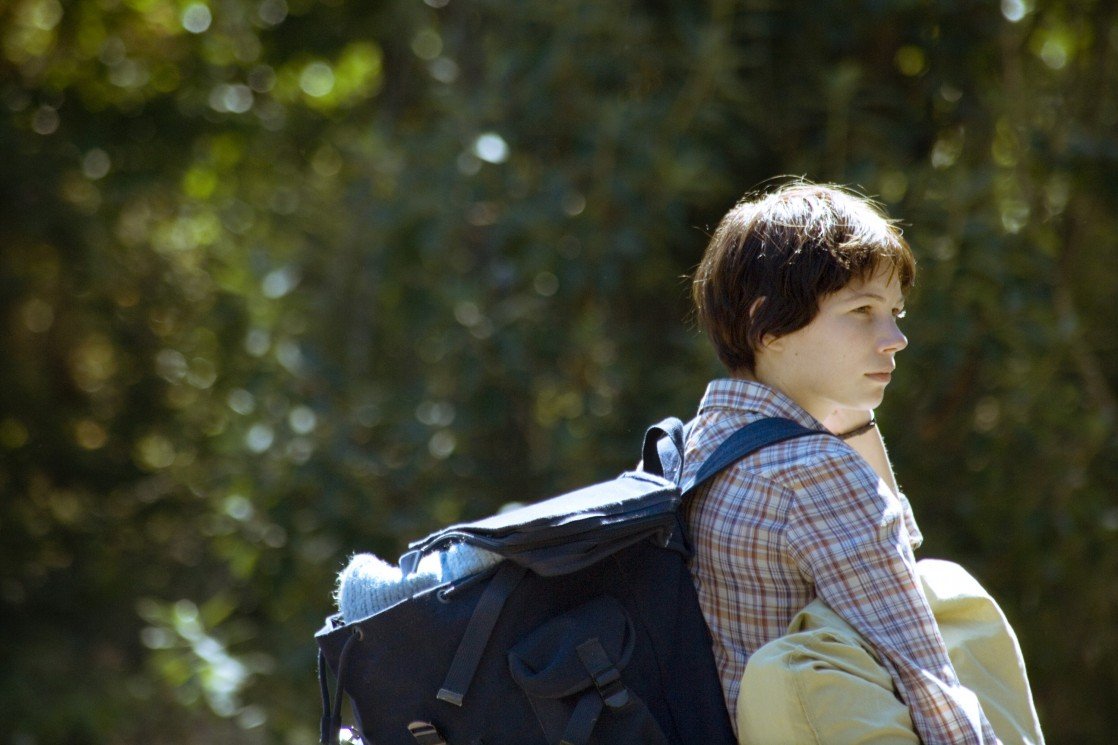 New York-based filmmaker Kelly Reichardt found great inspiration in the state of Oregon. After making Old Joy on a DIY budget, she reunited with Oregon writer Jon Raymond for an indie feature with a somewhat larger scope but the same intimate qualities.

Wendy and Lucy (2008) isn’t the romantic road movie of Alexander Supertramp in Into the Wild. This is survival, revealed in all the mundane details of a documentary portrait and the simple power of Michelle Williams’ unadorned performance as Wendy, a single young woman heading off to find work on Alaska in a used car with only her dog, Lucy, for company and support. When Lucy runs off and Wendy tracks her to a group of young drifters gathered around a bonfire, Reichardt keeps her camera back to watch Williams’ careful and wary body language tell the story of her vulnerability. That vulnerability isn’t simply physical. With no fixed address, no cell phone, and dwindling savings (all in cash), she’s practically off the grid. Every penny is accounted for. She collects bottles for the deposit and sweeps the seats for change.

The disarming directness and seeming simplicity of Reichardt’s direction can lull you into thinking that there isn’t anything going on, when in fact the film is built on a multiplicity of details and insights, never commented upon but essential to the character and her situation. And there’s a reason they don’t jump out at you: they are the everyday details of living in the modern world as experienced by a person living on the edge.

A setback that carries a costly but merely inconvenient price-tag to most of us is the disaster that pulls the rug from under Wendy. She’s been sleeping in her car all this time and now has to find a place to sleep (there’s nothing in the budget for a hotel room). Sleeping rough in the nearby woods, she awakens to find a hobo rummaging through her stuff and mumbling to himself. Her vulnerability is never more apparent than in this scene, which Reichert shoots in hard close-up on the intruder’s wild-eyed expression (Larry Fessenden, who is terrifyingly good at looking bedraggled and scary and utterly unpredictable) and Wendy’s paralyzed terror. It’s a terrifying moment and this intrusion into her personal space, as he rifles through her belongings while she wraps herself up in paralyzed terror, is a step away from rape or assault.

The ripples of minor obstacles have major repercussions. So do the small kindnesses of a security guard (Wally Dalton) and an understanding mechanic (Will Patton, who fills his tiny role with life and character). Wendy and Lucy is tender, tough, and uncompromising, photographed with a disarming directness and seeming simplicity that looks almost naked next to the dramatic constructions of Hollywood road movies. It just makes her precariousness all them more real.

, iTunes, GooglePlay and/or other services. Availability may vary by service.
Wendy and Lucy [DVD]

Oscilloscope’s DVD release offers something a little different in the way of supplements. Instead of commentary or interviews or a making-of featurette, Kelly Reichardt curates a collection of four experimental short films by members of the film faculty at Bard College.