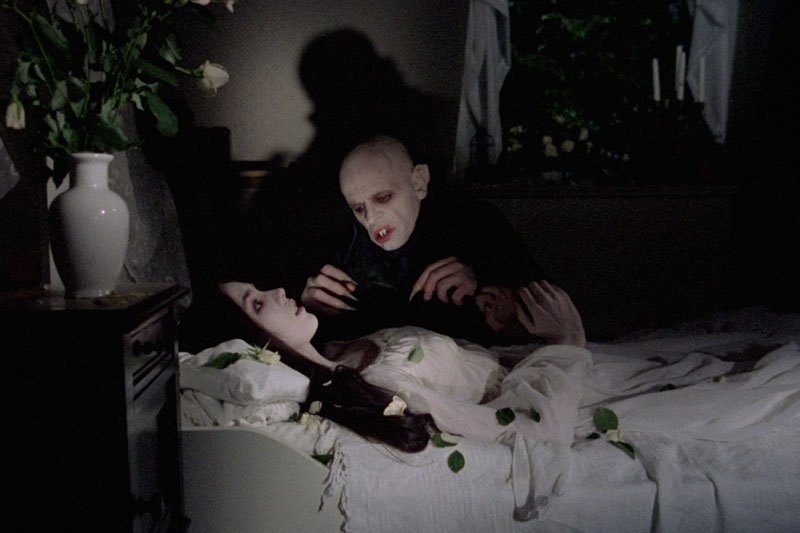 Nosferatu the Vampyre (Germany, 1979), Werner Herzog’s eerie color remake of F.W. Murnau’s original vampire classic (itself an unauthorized version of Bram Stoker’s Dracula), is at once faithful to Murnau’s film and quintessentially Herzogian.

Klaus Kinski, Herzog’s demon alter ego, is both hideous and haunting as the chalk-skinned gargoyle, a melancholy monster seeking an end to his eternal loneliness, and Isabelle Adjani’s dark eyes and alabaster skin give her the look of death’s bride. It’s the only remake that Herzog has ever directed and it is a natural subject for a filmmaker who focused on outcasts and obsessives and landscapes rich in natural grandeur and mythic power. Herzog named the vampire Dracula as in Bram Stoker’s novel but kept the title Nosferatu in tribute to Murnau, and he pays homage to many of Murnau’s memorable images with stunning recreations while creating a number of his own dreamy moments: the twilight hike of Bruno Ganz’s Jonathan Harker through the fog-ringed Carpathian Mountains, the ghostly aura of the deserted town, the surreal march of pallbearers parading caskets through the town square, all elevated by the ethereal music of Popul Vuh.

Herzog shot English and German versions simultaneously, with the actors performing the spoken scenes separately for each language, and edited them individually, resulting in subtle but palpable differences between the two seemingly identical editions. Herzog cuts the scenes in response to the variations in performance – some shots are held longer in the English version than in the German, and vice-versa – and even rearranges scenes, as if experimenting with variations. And he still ends up with two versions almost identical in running time. Herzog considered the German language edition more “culturally authentic” version and the Kinski and Ganz show a greater ease and confidence performing in German. Both are eerie and atmospheric takes on the legendary vampire tale.

, iTunes, GooglePlay and/or other services. Availability may vary by service.
Nosferatu The Vampyre [Blu-ray]

Shout! Factory presents both versions on Blu-ray, produced from new HD masters produced by Herzog. It’s a marked improvement over the earlier DVD release but (according to the Blu-ray collector sites) apparently not as good as the recent BFI Blu-ray, which underwent further restoration work. I don’t have the import to compare. This also includes two commentary tracks featuring Werner Herzog, one in English originally recorded for the Anchor Bay release, the other in German and moderated by Dutch-German writer and producer Laurens Straub (subtitled in English). Both are recorded for the German-language version. Also included is an archival “The Making of Nosferatu” featurette with behind-the-scenes footage.

It was previously on DVD from Anchor Bay