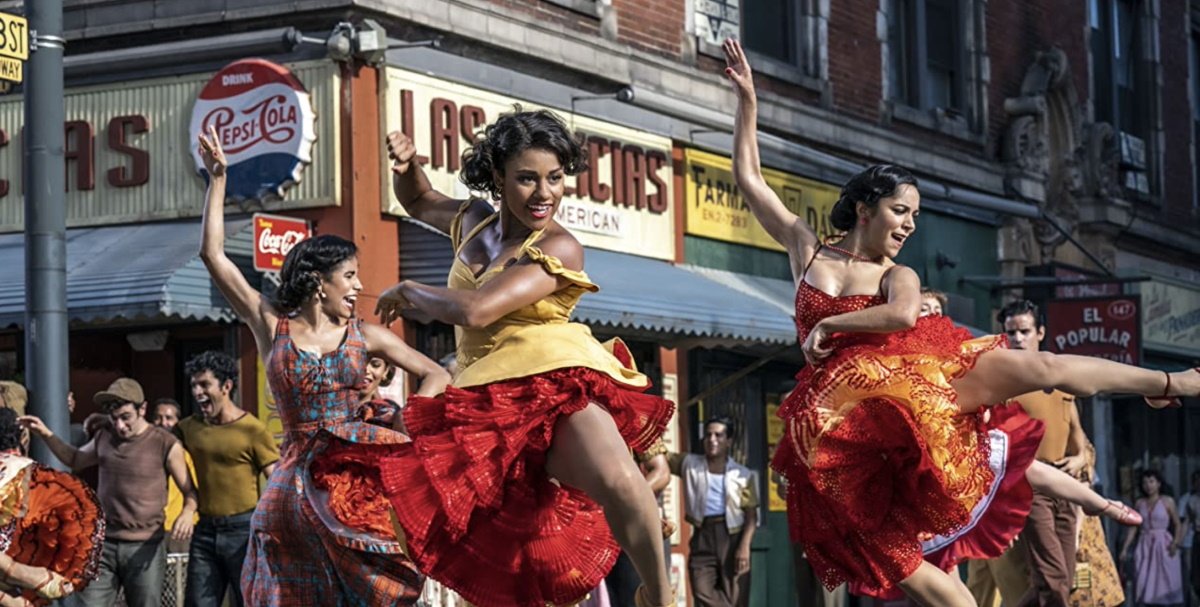 Steven Spielberg directs his first musical with this new adaptation of “West Side Story” (2021, PG-13), a “Romeo & Juliet” tale set between Irish-American and Puerto Rican-American gangs in 1950s New York City. The screenplay by Tony-winner Tony Kushner adds the pressure of urban renewal pushing poor communities out of their neighborhoods to the drama of racial conflict and culture clash. Nominated for seven Oscars, including best picture, director, and supporting actress for Ariana DeBose. (Disney+ and HBO Max)

A multilingual theater production of “Uncle Vanya” is at the center of “Drive My Car” (Japan, 2021, with subtitles, TV-MA), a three-hour drama of loss, grief, art, and friendship based on a short story by Haruki Murakami. This mix of road movie and theater drama is nominated for four Oscars, including best picture. (HBO Max)

“The Tourist: Season 1” (TV-MA) stars Jamie Dornan a British man who loses his memory after being run off the road in the Australian outback and goes in search of his identity and the reason that someone is trying to kill him. (HBO Max)

Toni Collette and Bella Heathcote play mother and daughter in “Pieces of Her” (TV-MA), a limited series thriller about a violent attack in a small town that brings up dark secrets from the mother’s past. It’s based on the novel by Karin Slaughter and costars David Wenham and Jessica Barden. (Netflix)

“F9: The Fast Saga“ (2021, PG-13) sends the action franchise of fast cars and faster car thieves into full-fledged super-spy adventure and even sends a car into space to stop an international terrorist. Vin Diesel, Michelle Rodriguez, John Cena, and Charlize Theron star, and Helen Mirren gets into the driver’s seat for a memorable cameo. (HBO Max)

Director Kenneth Branagh draws on his youth growing up in Belfast in the late 1960s in “Belfast“ (2021, PG-13), starring Caitriona Balfe and Jaime Dornan. It was nominated for seven Academy Awards, including best picture, best director, and for actors Judi Dench and Ciaran Hinds. Also on disc and at Redbox.

The documentary “Dear Mr. Brody“ (2022, not rated) explores the true story of a 21-year-old hippie-millionaire who was mobbed with requests after he announced he would give away his fortune to anyone in need, and the stories of some of the folks sought his help.

Available same day as select theaters nationwide is “Asking for It“ (2022, R) starring Vanessa Hudgens, Kiersey Clemons, and Alexandra Shipp as members of a vigilante group of badass women.

“The Weekend Away“ (2022, TV-14) stars Leighton Meester as an American in Croatia racing to clear her name when she’s accused of murdering her best friend. Based on the novel by Sarah Alderson

Chadwick Boseman is a New York cop investigating the deaths of NYPD officers in the crime thriller “21 Bridges“ (2019, R). It was one of the actors final screen appearances.

The surreal social satire “Sorry to Bother You“ (2018, R) stars Lakeith Stanfield as a telemarketer who finds the secret to sales success and rises up the ladder of a soulless corporation.

International TV: a journalist is plunged back in time to 1919 and uncovers a plot that could change the fate of modern Turkey in “Midnight at the Pera Palace: Season 1“ (Turkey, TV-14, with subtitles). Also new:

Kid stuff: the animated revival of “He-Man and the Masters of the Universe“ (TV-Y7) returns for a second season.

Streaming TV: the fifth and final season of “Better Things“ (TV-MA) with Pamela Adlon begins with new episodes on Tuesdays and “Dicktown: Season 2“ (TV-MA) rolls out new episodes on Fridays.

“Moby Doc“ (2021) profiles the life and music of musician and activist Moby, who narrates his story. More true stories:

True stories: “Gaming Wall Street“ (2022, TV-MA) explores how an online community drove up the price of GameStop and revealed how Wall Street investors game the system.

“My Brilliant Friend: Those Who Leave and Those Who Stay“ (Italy, TV-MA, with subtitles) is the third season of the acclaimed adaptation of Elena Ferrante’s epic four-volume novel cycle of life in the oppressive culture of post-World War II Naples.

“The Boys Presents: Diabolical: Season 1“ (2022, TV-MA) is an animated spinoff of the dark superhero drama and “Upload: Season 2“ (2022, TV-MA) continues the sci-fi satire of virtual life.

A father (Colin Farrell) searches for a way to repair his daughter’s companion android in the science fiction family drama “After Yang“ (2022, TV-PG), directed by Kogonada and costarring Jodie Turner-Smith and Haley Lu Richardson.

The fourth and final season of “Killing Eve“ (TV-14) brings the complicated relationship between British agent Eve (Sandra Oh) and Russian assassin Villanelle (Jodie Comer), who loves her work far too much, to its conclusion. New episodes on Sundays, a week before the episodes play on cable.

“Murder in Provence: Season 1“ (not rated) is a British crime show in France, starring Roger Allam as an Investigating Judge solving crimes in Aix-en-Provence.

“Murdoch Mysteries: Season 15“ (not rated), the hit Canadian procedural set in turn of the 20th century Toronto, returns with its longest season to date: 24 episodes, to debut weekly on Mondays through August.

The limited series documentary “The Missing Children“ (not rated) exposes the Catholic Church’s involvement in the trafficking, neglect and suspicious deaths of babies born to unwed mothers in Ireland.

“Pre-Code Paramount” spotlights 20 films made between the birth of sound cinema and the enforcement of the Hollywood Production Code, from the Marx Bros.’ screen debut in “The Cocoanuts“ (1929) and “Morocco“ (1930) with Marlene Dietrich and Garry Cooper to Ernst Lubitsch’s elegant “Trouble in Paradise“ (1932) and Mitchell Leisen’s sexy “Murder at the Vanities“ (1934). You can also explore bonus features with Lubitch’s menage-a-trois romantic comedy “Design for Living“ (1933) with Gary Cooper, Fredric March, and Miriam Hopkins and the boozy tale of alcoholism and open marriage “Merrily We Go to Hell“ (1932) from director Dorothy Arzner.

Samuel Jackson stars in “Eve’s Bayou“ (1997, R), a southern gothic drama with a twist of voodoo and the directorial debut of Kasi Lemmons.

Majid Majidi directs “Sun Children“ (Iran, 2020, not rated, with subtitles), a drama of child thieves who have to go back to school to retrieve a treasure for their adult gang boss. The kids are non-actors cast from the streets of Tehran.

The true crime docuseries “Bug Out“ (not rated) delves into the mystery of the largest known live insect heist in history. (IMDbTV)