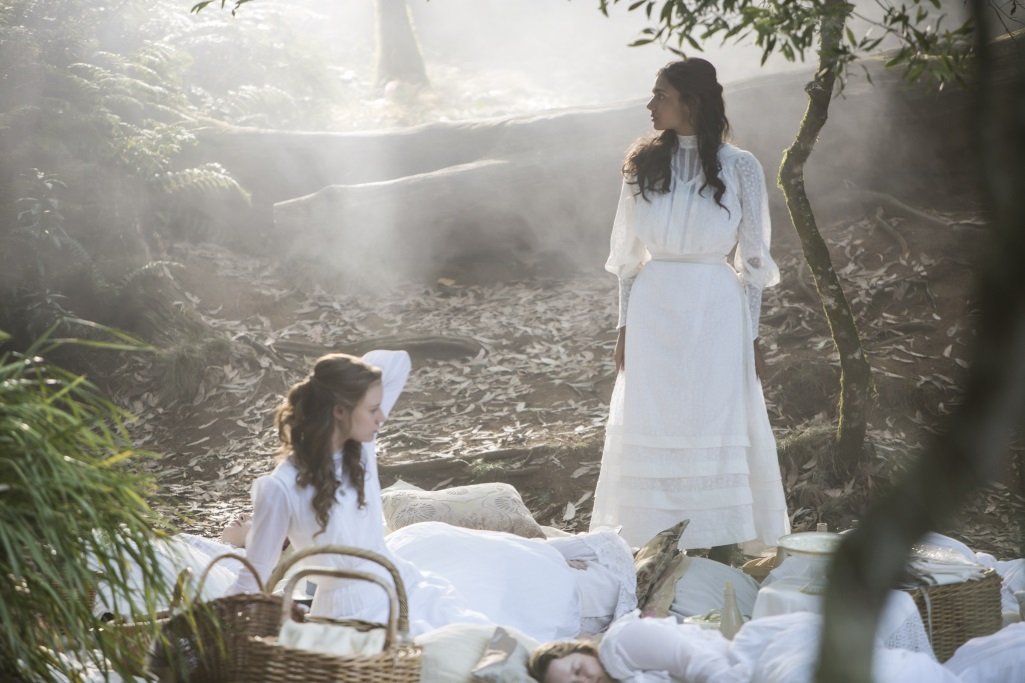 The miniseries Picnic at Hanging Rock (2018), based on the novel about four young women who vanish without a trace during an outing in the Australian outback in 1900, takes a darker, eerier approach than Peter Weir’s dreamy 1975 film. Natalie Dormer (“Game of Thrones”) stars as the mysterious headmistress of a boarding school filled with secrets and repressed emotions.

It is “lush, gorgeous, Gothic and at times plotted tighter than a corset,” writes Boston Herald TV critic Mark Piergard, and it “simmers with class and gender tensions in a story that sometimes teases the surreal.”

Salma Hayek is a massage therapist invited to a wealthy client’s dinner party in Beatriz at Dinner (2017, R), where her patience and generosity is tested by a brazen, bigoted billionaire (a swaggering John Lithgow) and the apathy of the guests who tolerate his toxic behavior. Director Miguel Arteta and writer Mike White present a timely and discomforting satire for the age of Trump. Streaming on Prime Video and Hulu.

A Fantastic Woman (Chile, 2017, R, with subtitles), starring real-life transsexual actress Daniela Vega as the lover of an older man forbidden by his family to pay her respects at his funeral, won the Academy Award for foreign language film. On Cable On Demand and VOD, plus Blu-ray and DVD.

Netflix presents Steve Martin and Martin Short: An Evening You Will Forget for the Rest of Your Life (2018), a recording of the live 2018 show featuring the longtime friends sharing anecdotes and performing new and classic skits. “This special is wryly hip, cozily nostalgic but, also, unexpectedly touching,” proclaims Tim Grierson at Rolling Stone. “These senior citizens’ ironic razzle-dazzle salutes a bygone, probably passé strain of live entertainment – it’s a breed of comedy that’s not getting any younger and, poignantly, neither are its practitioners.”

Jason Bateman and Rachel McAdams play a highly competitive couple who treat a kidnapping like an interactive game in the action comedy Game Night (2018, R). Also on disc and at Redbox.

Jennifer Lawrence is a Russian ballerina forced to become a spy and seduce a CIA agent (Joel Edgerton) in Red Sparrow (2018, R), a Cold War thriller based on the award-winning novel by Jason Matthews, who drew on his own knowledge as a CIA operative.

Available same day as select theaters nationwide is In Darkness (2018, not rated), a thriller starring Natalie Dormer as a blind musician in London who hears a murder in a neighboring apartment, and Future World (2018, R), a science fiction thriller in an environmentally ravaged world co-directed by and co-starring James Franco.

Gillian Jacobs stars in the Netflix Original romantic comedy Ibiza (2018, not rated) as a New York single who hits the party hub of Spain with her two best friends and falls for a handsome DJ (Richard Madden).

Josh Hutcherson and AnnaSophia Robb star in Bridge to Terabithia (2007, PG), the smart screen adaptation of Katherine Paterson’s kid lit classic about the power of imagination and friendship and a tale of fantasy grounded in a very real and sometimes hard world.

Each episode of the weekly Netflix Original series Explained tackles a single issue in the news. New episodes arrive each Wednesday.

Stand-up: Tig Notaro: Happy To Be Here is the famed comic’s return to stand-up comedy after the end of her Amazon Prime series.

Daniel Radcliffe continues to shed his “Harry Potter” image in the action thriller Beast Of Burden (2018, R) as a drug smuggling pilot caught between the cartel and the DEA.

Also new: indie comedy Creedmoria (2016, PG-13), about a teenage girl trying to escape her dysfunctional Brooklyn family, and James Franco’s adaptation of William Faulkner’s The Sound and the Fury (2015, not rated).

Streaming TV: revisit the coming-of-age series Dawson’s Creek (1998-2003) with James Van Der Beek, Katie Holmes, Michelle Williams, Joshua Jackson, and the rest of the kids from Capeside. Prime Video has the complete series: all 128 episodes of young adult romance and melodrama. This edition features the alternate theme song of the syndicated release (Jann Arden’s “Run Like Mad”) except for the series finale, which brings back the original theme “I Don’t Want to Wait” by Paula Cole.

David Tennant plays real-life psychiatrist R.D. Laing in Mad to be Normal (2017, not rated), a drama about the doctor’s then-radical approach to treating the mentally ill with therapy and communal support.

Streaming TV: Julia Ormond, Mädchen Amick, and Jenna Dewan Tatum are The Witches of East End in the femme-centered supernatural melodrama about a family of witches beset by a curse that ran for two seasons on Lifetime. Hulu has the complete run of this sexy and somewhat cheeky series.

Michael B. Jordan and Michael Shannon star in the new adaptation of Fahrenheit 451 (2018, TV-14), based on the classic Ray Bradbury novel about a future where firemen are sent to burn books.

Arriving Saturday night is the HBO Original movie The Tale (2016, TV-MA), the feature debut of award winning documentary filmmaker Jennifer Fox, starring Laura Dern as a woman who questions the memories of her first sexual experience.

TCM Select Pick of the Week is The Maltese Falcon (1941), the iconic film noir starring Humphrey Bogart as Sam Spade and a great supporting cast: Mary Astor, Sidney Greenstreet, Peter Lorre, Elisha Cook Jr., and Ward Bond in a small role as a cop. It streams through November 16.

It was also the directorial debut of John Huston, who is FilmStruck’s “Director of the Week” with a selection of 12 features including the landmark documentary Let There Be Light (1946), Oscar-winning classic The Treasure of the Sierra Madre (1948) with Bogart, The Man Who Would Be King (1975) with Sean Connery and Michael Caine, and the offbeat Wise Blood (1979) with Brad Dourif and Harry Dean Stanton.

Also new: Miguel Gomes’ dreamy memory drama Tabu (Portugal, 2012, with subtitles), eight films with “Star of the Week: Danny Kaye,” including The Secret Life of Walter Mitty (1947), and a collection of films celebrating West African Cinema, including the landmark dramas Touki Bouki (1973, with subtitles) from Senegal, Yeelen (1987, with subtitles) from Mali, Mother of George (2016, R, with subtitles) with Isaach Debankolé and Danai Gurira, and three films from and a documentary about the great Ousmane Sembene.

The Australian comedy Sando stars Sacha Horler as a disgraced CEO and a trainwreck of a mother who tries to reconnect with her family after she’s ousted from her business. All six episodes available

Also from Australia comes the TV movie Sisters of War (2010), a World War II drama about a group of Australian nurses and Catholic nuns captured as prisoners of war by the Japanese on a small Pacific island.

Ben Cross and Amy Irving star in the acclaimed British miniseries The Far Pavilions (1984), which originally played on HBO in the U.S. Also newly arrived from England are Amnesia (2004), a crime drama starring John Hannah, and the miniseries Anna Karenina (2000) with Helen McCrory and Kevin McKidd.

FilmStruck, Hulu, Netflix, Picnic at Hanging Rock, Steve Martin and Martin Short: An Evening You Will Forget for the Rest of Your Life, VOD