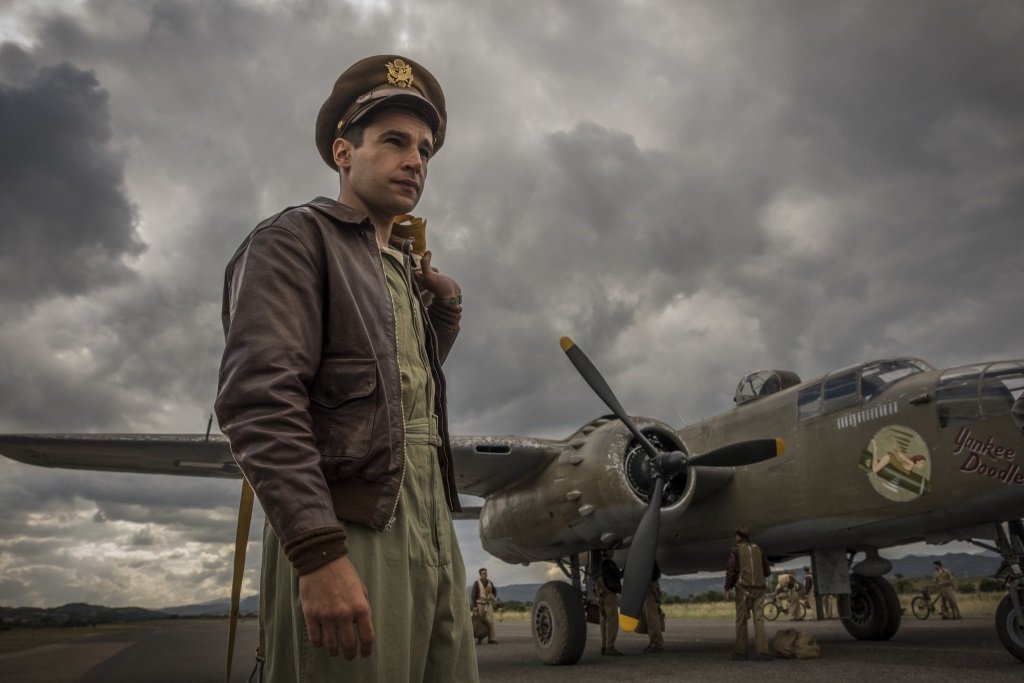 Christopher Abbott is John Yossarian, a bomber pilot trying to survive both the violence and the insanity of in World War II, in the six-part Hulu miniseries Catch-22. George Clooney produces, codirects, and costars with Kyle Chandler and Hugh Laurie in the new adaptation of Joseph Heller’s biting anti-war novel. Now streaming on Hulu.

The documentary What’s My Name: Muhammad Ali (2019, not rated) looks at the public life of the boxing champion and his often complex relationship with the media and the country through archival footage and Ali’s own words. Streaming on all HBO platforms.

The Gothic horror We Have Always Lived in the Castle (2019, not rated), based on the Shirley Jackson novel and starring Taissa Farmiga and Crispin Glover, is available on Cable On Demand and VOD same day as select theaters nationwide.

A young woman (Florence Pugh) in working class English wrestling family gets a shot at the WWE in Fighting With My Family (2019, PG-13), a scrappy comedy based on a true story. Dwayne Johnson is a producer and costars as himself.

Foreign affairs: an assassin (Cristine Raines) comes out of retirement to protect her family in the crime thriller Maria (Philippines, 2019, not rated, with subtitles).

Streaming TV: the offbeat comedy It’s Bruno: Season 1 follows the everyday adventures of a man and his dog in Brooklyn. Also new:

Kid stuff: junior lifeguards compete in Malibu Rescue: Season 1 (2019, not rated), a show for teens and tweens, while Chip & Potato: Season 1 (Netflix Original Series) is an animated show for kindergarteners.

Catherine Keener plays as a working-class homeowner who takes on the government in Little Pink House (2018, not rated), inspired by the true story of a landmark case.

Katie Holmes, Josh Duhamel, and Anna Paquin make up a romantic triangle in the indie drama The Romantics (2010, PG-13) (Prime Video and Hulu).

Maxine Peake stars in Funny Cow (2017, not rated), a comic drama about a female comedian fighting the male-dominated stand-up culture in 1970s and 1980s Northern England (delayed from April).

Adrift (2018, PG-13) stars Shailene Woodley and Sam Claflin as a young couple whose solo sailing adventure becomes a survival odyssey when they are caught in a hurricane. Also new: the second season of Our Cartoon President and stand-up comedy special Brendan Schaub: You’d Be Surprised.

Line of Duty: Season 5, the acclaimed cop drama created by Jed Mercurio and the top rated British show of 2019, makes is U.S. debut on Acorn TV.

Also new: A Voyage Round My Father (1982), adapted by John Mortimer from his semi-autobiographical play, features Laurence Olivier and Alan Bates, along with the final seasons of Mortimer’s Rumpole of the Bailey with Leo McKern, making the entire series available to stream.

The filmed performance of the London West End revival of the musical 42nd Street (2018) that showed on big screens in a one-night-only Fathom Event is now streaming exclusively on BroadwayHD.