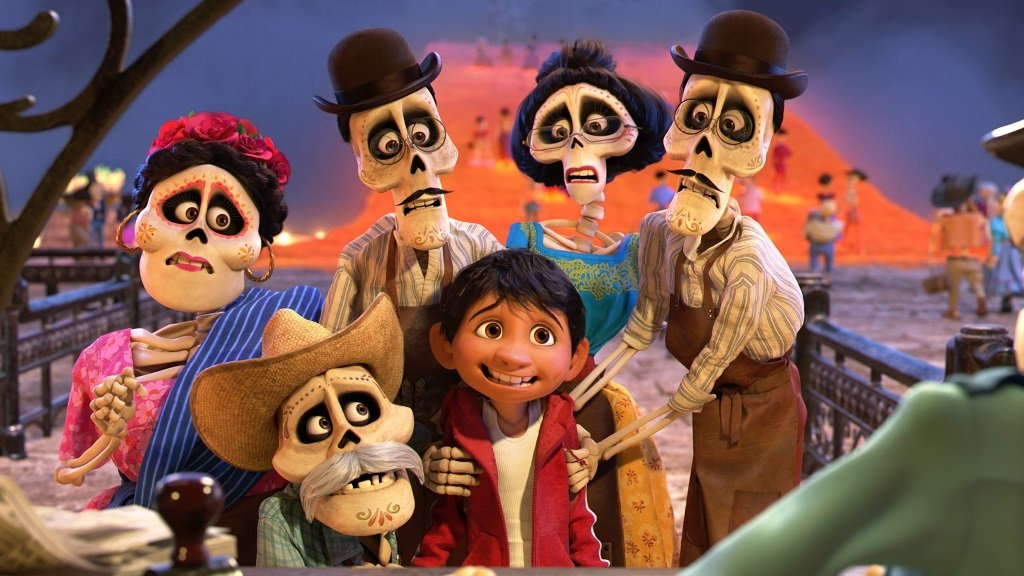 Pixar’s Oscar-winning animated feature Coco (2017, PG) draws from Mexican folklore and music for the colorful adventure of a boy’s journey through the Land of the Dead to contact his ancestors. Now streaming on Netflix.

Also on Netflix is Outside In (2017, not rated), a drama directed by Seattle filmmaker Lynn Shelton in Washington State with Edie Falco as a high school teacher torn between her family and the former student (Jay Duplass) she helps readjust after spending half his life in prison.

James Franco directs and stars as Tommy Wiseau in The Disaster Artist (2017, R), a stranger-than-fiction comedy based on the true story behind the creation of the midnight movie phenomenon The Room, one of the best bad movies ever made. On Amazon Prime Video.

Margot Robbie is Tonya Harding in I, Tonya (2017, R), a self-aware, blackly-comic, class-conscious take on the story of the Portland-born figure skater who was banned from skating for her role in the attack on Nancy Kerrigan. Allison Janney won an Academy Award for playing her bullying, chain-smoking mother. Streaming on Hulu.

Annihilation (2018, R) stars Natalie Portman as a Special Forces soldier who joins a team of women scientists to investigate an alien force field slowly growing on Earth. Adapted by “Ex Machina” director Alex Garland from the novel by Jeff VanderMeer, this is a science fiction thriller that favors science and mystery over action. On Cable On Demand, VOD, and DVD. Also at Redbox.

The Last Witness (2018, not rated), a drama about the secret slaughter of 22,000 Polish officers during World War II, and the eerie low budget sci-fi thriller They Remain (2018, not rated) arrive after limited theatrical release.

Bombshell: The Hedy Lamarr Story (2017, not rated) reveals the multifaceted life of the glamorous actress who created the technology that makes Bluetooth, Wi-Fi, and cell phones possible. Reviewed on Stream On Demand here.

The Break with Michelle Wolf, a new Netflix Original topical comedy series, presents the comedian notorious for her unfiltered monologue at the White House Correspondents’ Dinner offering comic commentary on the news interspersed with skits. New episodes arrive each Sunday.

Foreign affairs: A Spanish lawyer (Laura Alonso) searches for her missing sister in the violence and chaos of the Congo in Sara’s Notebook (Spain, 2018, not rated, with subtitles), which debuts in the U.S. on Netflix.

More streaming TV: the second season of Riverdale, the CW young adult soap that reimagines the characters of the “Archie” comics in a dark town out of Twin Peaks, is available weeks after the TV finale. Also new:

Dan Stevens plays Charles Dickens in The Man Who Invented Christmas (2017, PG), a fanciful retelling of the author’s struggle to write “A Christmas Carol,” and Woody Harrelson is LBJ (2017, R) in Rob Reiner’s biographical drama about the 36th President.

Foreign affairs: August Diehl is The Young Karl Marx (France, 2017, not rated, with subtitles) in the film directed by Raoul Peck.

The bride is not about to let anything spoil The Wedding Plan (Israel, 2017, PG, with subtitles) when her fiancé backs out in this Israeli romantic comedy (Prime Video and Hulu).

Dakota Fanning stars as an autistic Trekkie in the road movie Please Stand By (2018, PG-13).

Also new this week: Across the Universe (2007, PG-13) with “Westworld” star Evan Rachel Wood and the music of the Beatles;

The HBO Original documentary John McCain: For Whom the Bell Tolls (2018, TV-14) profiles the venerable Senator from Arizona as he battles brain cancer.

Laura Dern is a woman who questions the memories of her first sexual experience in the HBO Original drama The Tale (2016, TV-MA) from documentary filmmaker Jennifer Fox.

Also new: comic drama Dean (2017, PG-13) starring director/writer Demetri Martin as a New York cartoonist facing an emotional crossroads and Mrs McCutcheon (2017, not rated), an Australian drama about a 10-year-old boy who chooses to live as a girl.

TCM Select Pick of the Week is The Women (1939), George Cukor’s adaptation of Booth Luce’s play, where men are usually the topic at hand but never seen on screen. Cukor was celebrated in Hollywood as a great director of women and he works here with the cream of MGM’s female stars. Norma Shearer is a happily married woman whose husband is having an affair with Joan Crawford, Rosalind Russell is the incorrigible gossip in this society of women, and Mary Boland, Paulette Goddard, Joan Fontaine, Ruth Hussey, Marjorie Main and Lucille Watson co-star. There is not a single male actor to be found in this alternately catty and consoling melodrama of social climbers, gossips, homewreckers, and the innocents caught between their conniving plots. “There’s a name for you ladies, but it isn’t used in high society, outside of a kennel.” Available to stream through November 23, 2018.

Joan Crawford is also Star of the Week, featured in 21 films from the silent horror classic The Unknown (1927, silent with score) with Lon Chaney to her final role in the trashy cult horror Trog (1970). A few of the stand-outs in between: the all-star Grand Hotel (1932) with Greta Garbo and John Barrymore, Possessed (1931) and Strange Cargo (1940) with Clark Gable, crime melodrama A Woman’s Face (1941) with Melvyn Douglas, and romantic drama Humoresque (1946) with John Garfield.

Also new: six films from (plus a documentary about) “Director of the Week: Lina Wertmüller,” including her Oscar-nominated Seven Beauties (Italy, 1975, R, with subtitles), and eight films presenting “Peter Sellers Before Clouseau,” including the comedy I’m All Right Jack (1960) and Stanley Kubrick’s Lolita (1962).

800 Words: Series 3, Part 1, the quirky Australian comedy about a widower newspaperman who packs his family off to New Zealand, rolls out with new episodes each Monday.