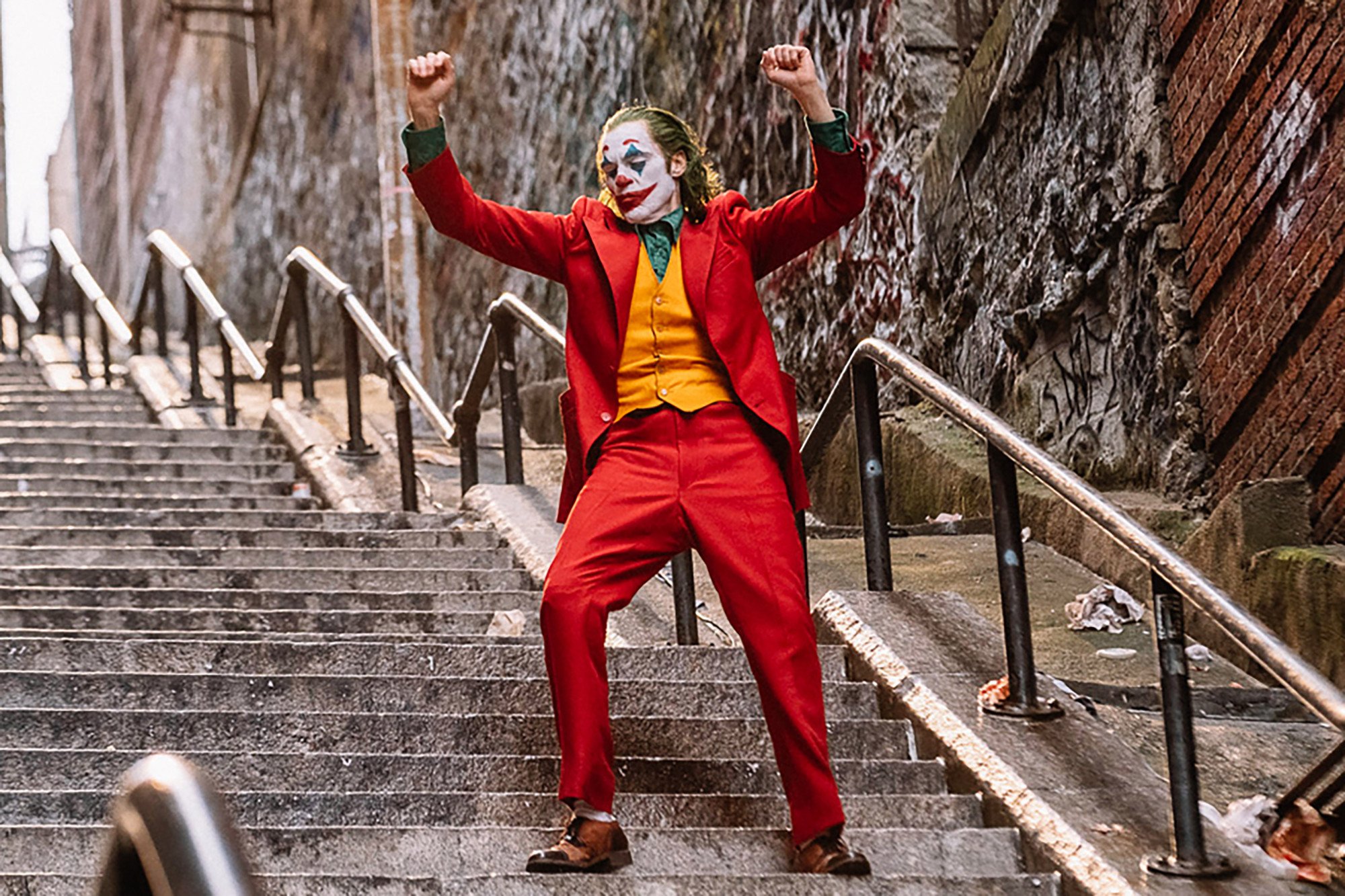 Joaquin Phoenix took home a Golden Globe for his performance as a mentally-troubled man who becomes a psychopathic supervillain in “Joker“(2019, R). Todd Phillips’ take on the superhero movie is in part inspired by seventies American cinema and Martin Scorsese’s “Taxi Driver” and “King of Comedy” in particular, and it costars Robert DeNiro. On Cable On Demand and VOD, also on DVD and at Redbox.

Steven Moffat and Mark Gattis, the creators of “Sherlock,” take on Bram Stoker’s classic novel in a new version of “Dracula” (2020, TV-13). Claes Bang plays the eternal vampire in this reimagining of the horror classic, which reworks the lore and mythology of the character in evocative and inspired ways. The three-part miniseries is streaming on Netflix.

An assassination in London sets off a Yakuza war in Tokyo in the new series “Giri/Haji,” a new cross-continental crime thriller that sends a Japanese detective (Takehiro Hira) to London. Kelly Macdonald and Charlie Creed Miles also star in the Netflix/BBC coproduction. The title translates to “Duty/Shame.” Originally broadcast on BBC in 2019, all eight episodes debut stateside this week on Netflix.

Will Smith is the big blue genie in “Aladdin” (2019, PG), Disney’s live action version of its 1992 animated musical, starring Mena Massoud as street urchin Aladdin and Naomi Scott as Princess Jasmine. It makes its streaming debut on Disney+.

If you missed them during their original television broadcasts, you can catch up with the special “The 77th Annual Golden Globe Awards” and the “Jeopardy!: The Greatest of All Time” tournament (featuring Seattle’s Ken Jennings) on Hulu.”

Willem Dafoe and Robert Pattinson go stir crazy during their three-month stint manning “The Lighthouse” (2019, R) off the stormy Atlantic coast in the stylized, somewhat hallucinatory second feature from director Robert Eggers. Also on DVD and at Redbox.

Vanessa Redgrave and Timothy Spall star in “Mrs. Lowry and Son” (2019, not rated), based on the true story of British artist L.S. Lowry.

Available same day as select theaters nationwide is “Speed of Life” (2019, not rated), a time-travelling love story starring Ann Dowd and inspired by the music of David Bowie. Also new:

RuPaul stars in “AJ and the Queen: Season 1,” a road trip comedy about a drag queen and a ten-year-old runaway kid.

“Medical Police: Season 1,” a spinoff of the Adult Swim series “Children’s Hospital,” turns the search for a deadly virus into a globetrotting comedy.

Animation: “Cells at Work!: Season 1” (Japan, TV-14) imagine blood cells in the immune system as human-like characters (English and Japanese versions) and the offbeat “Scissor Seven: Season 1” (China, not rated) follows a young assassin who is a master of disguise (English and Chinese versions).

Sam Rockwell is a lone, lonely operator of a mining operation who suddenly is confronted with an exact double of himself in “Moon” (2009, R). Also newly arrived:

Bella Thorne plays a young woman unable to be out in the sunlight in the romantic drama “Midnight Sun” (2018, PG-13), costarring Patrick Schwarzenegger.

The Amazon Original Series “James May: Our Man in Japan: Season 1” sends the star of “The Grand Tour” and “Top Gear” on a road trip through Japan.

True stories: the documentary “Creating Woodstock” (2019, not rated) looks at the creation of the most famous music festival of all time.

Jason Momoa takes over the role of the brawny warrior in the remake of “Conan the Barbarian” (2011, R), based on the pulp fiction hero created by Robert E. Howard (Prime Video and Hulu).

Jesse Eisenberg learns “The Art of Self-Defense” (2019, R) in the satire on American masculinity costarring Alessandro Nivola as a charismatic karate instructor and Imogen Poots as a fellow student. Streaming on Hulu.

Claire Danes stars as the brilliant but bipolar CIA operative in “Homeland: Seasons 6 & 7,” on Hulu a month before the final season begins on Showtime.

Episodes of the new NBC series “Zoey’s Extraordinary Playlist” stream a day after episodes are broadcast. You can also stream new episodes of “Manifest: Season 2,” the competition shows “America’s Got Talent: The Champions: Season 2” and “Ellen’s Game of Games: Season 3,” and the reality series “Gordon Ramsay’s 24 Hours to Hell and Back: Season 3.”

True stories: Werner Herzog explores the Internet in “Lo and Behold: Reveries of the Connected World” (2016, PG-13), a look at the people behind the digital revolution.

Nicholas Hoult is young J.R.R. Tolkein in “Tolkien” (2019, PG-13), which dramatizes the formative years of the legendary author the inspirations that would lead to “The Hobbit” and “Lord of the Rings.” Also new is the historical romantic drama “The Aftermath” (2019, R) with Keira Knightley and Alexander Skarsgård.

The third and final season of the teen superhero series “Marvel’s Runaways,” originally produced for Hulu, is now streaming.

Criterion Channel has a festival of science fiction cinema of the seventies with 18 films new to the service, from Stanley Kubrick’s “A Clockwork Orange” (1971, R) to George Miller’s original “Mad Max” (1979, R) with Mel Gibson. Among the rarities and highlights are Cornel Wilde’s hard-edged end-of-the-world thriller “No Blade of Grass” (1970, R), George Lucas’s cerebral “THX 1138” (1971, R) with Robert Duvall, the influential “Soylent Green” (1973, PG) with Charlton Heston, and Larry Cohen’s trippy “God Told Me To” (1976, R).

Also new: Agnès Jaoui’s “The Taste of Others” (France, 2000, R, with subtitles) and “Look at Me” (France, 2004, PG-13, with subtitles), written by and starring Jaoui and Jean-Pierre Bacri, and a special edition version of the searing film noir classic “Sweet Smell of Success” (1957) with Burt Lancaster and Tony Curtis, featuring a 1986 documentary about director Alexander Mackendrick and a 1973 documentary about cinematographer James Wong Howe

“Howards End” (2017, TV-14), a miniseries originally made for Starz and adapted from the Forster novel by Oscar-winning screenwriter Kenneth Lonergan, stars Hayley Atwell and Matthew Macfadyen in a romance complicated by class, money, and social arrogance. Also new is “No Second Chance” (France, 2015, with subtitles), a six-part thriller based on the novel by Harlen Coben

The horror specialty service presents “The Head Hunter” (2019, not rated), a thriller about a medieval warrior who hunts monsters, and “Luz” (Germany, 2019, not rated, with subtitles), about a cab driver fleeing a demon. Also new: