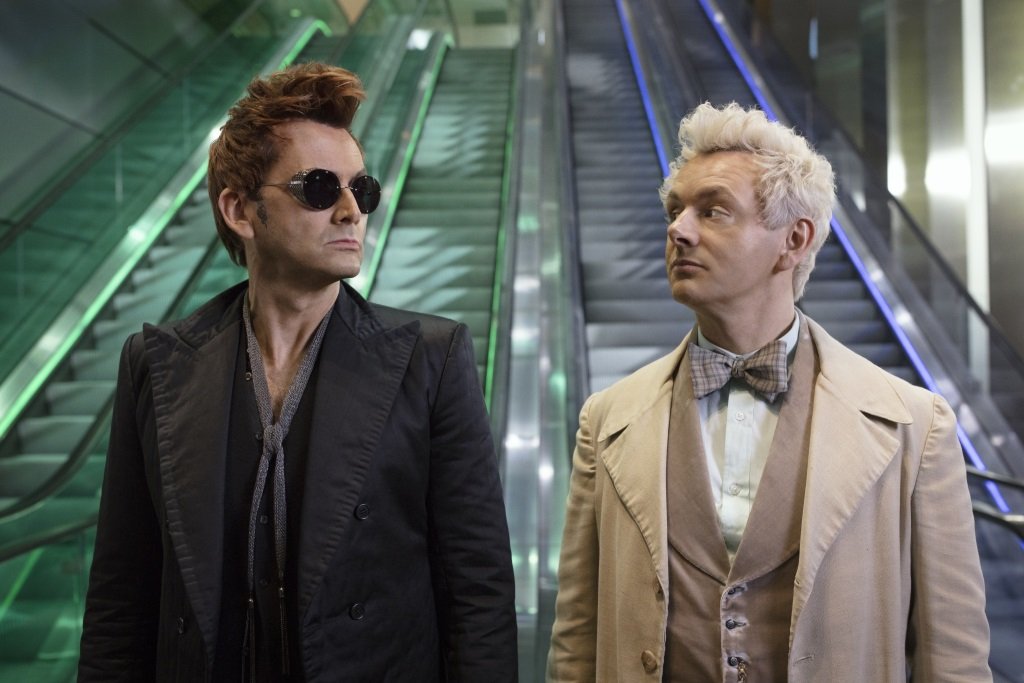 Michael Sheen is an epicurean angel and David Tennant a rebellious demon who team up to stop Armageddon in the Amazon Original limited series Good Omens (2019), a comic fantasy scripted by Neil Gaiman from the novel he wrote with Terry Pratchett.

Ava DuVernay revisits the miscarriage of justice of The Central Park Five—African-American teenagers wrongfully accused and convicted of a brutal rape in 1989 and exonerated in 2002—in the limited series When They See Us (2019), a dramatization that focuses on the lives of the five young men over 25 years as they survive prison and struggle to return to society.

“In When They See Us, seeing also means witnessing,” writes Judy Berman for Time. “It means honoring each of the Central Park Five as a discrete human being, a task that is lost on neither DuVernay nor her youngest actors.”

More than a decade after the series was abruptly cancelled by HBO, Deadwood: The Movie (2019, TV-MA) reunites creator/writer David Milch and the cast to bring the story of the legendary frontier Gold Rush town to a conclusion. Timothy Olyphant, Ian McShane, Kim Dickens, Molly Parker, John Hawkes, and Robin Weigert headline the feature-length conclusion. On all HBO platforms.

Angourie Rice is a teenage department store clerk in Ladies in Black (2018, PG). Bruce Beresford directs the coming of age drama set in 1959 Australia costarring Julia Ormond and Rachael Taylor. On Cable on Demand and VOD.

Inspired by a true story, comic crime thriller How to Sell Drugs Online (Fast): Season 1 (Germany, with subtitles) is a teenage “Breaking Bad” about a high school kid who builds Europe’s biggest online drug empire from his bedroom. Eight episodes.

My Week with Marilyn (2011, R), based on the memoir (of dubious authenticity) of a production assistant (played by Eddie Redmayne) on “The Prince and the Showgirl,” stars Michelle Williams in an Oscar-nominated performance as Marilyn Monroe and Kenneth Branagh as Laurence Olivier. Also new:

The first two seasons of the Starz historical romantic fantasy Outlander, based on the novels of Diana Gabalon and starring Caitriona Balfe as a nurse from 1945 England who is carried back to 1743 Scotland, are now streaming. Also new:

Ernest and Celestine (2014, not rated) was nominated for best animated feature at the 2014 Academy Awards.

The documentary The Other F Word (2011, not rated) profiles punk rockers as they become fathers raising their own families.

Nicolas Cage hunts a serial killer in The Frozen Ground (2013, R), a thriller based on a true story, costarring John Cusack and Vanessa Hudgens (Prime Video and Hulu).

David Gordon Green’s Halloween (2018, R) is not a remake but a sequel to the original 1978 horror classic with Jamie Lee Curtis reprising her role as Laurie Strode, now a paranoid survivalist who is ready for the return of Michael after 40 years. John Carpenter, director of the original, is one of the producers and composes the score.

Running with Beto (2019, not rated), a documentary profile of politician Beto O’Rourke, comes to HBO from its film festival run.

If you’re still mourning the end of a certain fantasy epic about kingdoms and dragons, you can get behind the scenes for a last look at the final season with the documentary Game of Thrones: The Last Watch (2019, TV-MA), which spotlights the efforts of the folks who don’t otherwise get any attention, from extras to production assistants to the lunch truck cook.

Quiet Storm: The Ron Artest Story (2019, not rated) profiles the ordeal of the basketball star’s battle with mental illness.

The Criterion Channel spotlights the films of two American Independent women filmmakers this month. The Kelly Reichardt Masterclass includes the beautiful Michelle Williams collaborations Wendy and Lucy (2008, R) and Meek’s Cutoff (2010, PG) and Ann Biller is represented by her feminist take on genre filmmaking with Viva (2007, not rated) and The Love Witch (2016, not rated).

Also added this month are classic films by Italian filmmaking brothers Paolo and Vittorio Taviani (Padre Padrone, 1977, The Night of the Shooting Stars, 1982) and dry romantic comedies by South Korean director Hong Sang-soo (The Day He Arrives, 2011, On the Beach at Night Alone, 2017, Claire’s Camera, 2017), all with subtitles.