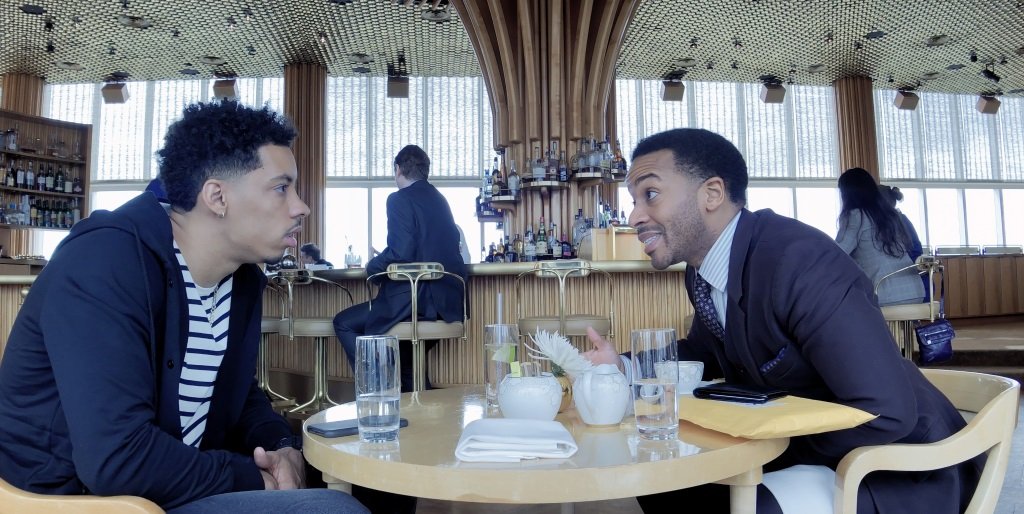 Oscar-winning filmmaker Steven Soderbergh directs High Flying Bird (2019, not rated), a Netflix original sports drama about “the game on top of the game.” Written by “Moonlight” screenwriter Tarell Alvin McCraney and starring André Holland as sports agent, it takes on race, money, and the business of professional sports in something that resembles a caper movie. Zazie Beetz, Bill Duke, Sonja Sohn, Melvin Gregg, Zachary Quinto, and Kyle MacLachlan co-star in the film that Soderbergh shot on an iPhone. The Netflix Original Movie debuted at the Slamdance Film Festival.

Joaquin Phoenix is John Callahan in Don’t Worry, He Won’t Get Far on Foot (2018, R), Gus Van Sant’s film about the Portland, Oregon, artist who recreated himself as a cartoonist after a car wreck left him quadriplegic. More to the point, it takes on the battle with alcoholism Callahan wrote about in his memoir. Jonah Hill, Rooney Mara, and Jack Black co-star. On Amazon Prime Video.

Classic picks: Orson Welles’ The Magnificent Ambersons (1942) is an elegiac drama of the decline of a powerful family stuck in the past while the world passes them by, and the Oscar-winning musical West Side Story (1961) is timely once more with Steven Spielberg’s remake now in production. Both streaming on Netflix.

The Criterion Channel (re)launches in April but if you sign up now to 30-day trial you get a free streaming movie each week until the site officially debuts.

Viola Davis leads a team of amateurs on a heist in Widows (2018, R), a gritty drama set in the corrupt culture of Chicago crime and politics. Steve McQueen (“12 Years a Slave”) directs and Elizabeth Debicki, Michelle Rodriguez, and Cynthia Erivo co-star with Colin Farrell and Liam Neeson. Also on DVD and at Redbox.

John C. Reilly and Joaquin Phoenix are frontier assassins in The Sisters Brothers (2018, R), an offbeat western based on the cult novel by Patrick Dewitt. Also on DVD and at Redbox.

Also new: The Grinch (2018, PG), a new animated adaptation of the Dr. Seuss classic featuring the voice of Benedict Cumberbatch;

Daniel Craig took on the mantle of James Bond in Casino Royale (2006, PG-13), a gritty reboot that revitalized the series.

The laconic, offbeat comic drama Get Low (2009, PG-13) stars Robert Duvall as a cantankerous hermit who stages his own funeral before he dies. Sissy Spacek and Bill Murray co-star.

True stories: ReMastered: The Two Killings of Sam Cooke looks into the murder of the legendary singer.

Streaming TV: from the National Geographic Channel comes Mars: Season 1, which imagines the first manned spaceflight to the red planet through a mix of science fiction drama and science documentary. Also new:

Stand-up: Ray Romano: Right Here, Around the Corner is the comedian’s first stand-up special in over 20 years.

Charlie Hunnam and Rami Malek star in Papillon (2018, R), a remake of the prison break classic based on the true story of Henri Charrière’s escape from Devil’s Island.

White Dragon, a crime miniseries originally made for British TV (where it was called “Strangers”), stars John Simm as a British professor in Hong Kong looking into his wife’s death and discovering her secret life. The eight-part series debuts on Amazon in the U.S.

Cult: violent crime thriller Let the Corpses Tan (Belgium, 2018, not rated, with subtitles) is a tribute to Italian gangster movies with intertwining storylines, double-crossing characters, and flamboyant direction with a dash of spaghetti western style.

Classic: Holiday (1938) stars Cary Grant as a free-thinker with a hearty appetite for life whose impending marriage to an image-conscious socialite threatens to douse his independent spirit and Katherine Hepburn as the sister of the bride inspired by his passion. It’s one of Grant’s best films and the third of four films starring the well-matched romantic pair. Lew Ayres and Edward Everett Horton co-star and George Cukor directs.

More streaming TV: Amazon releases the SyFy series The Expanse: Season 3 in advance of taking over the show for its upcoming fourth series. Also new:

True stories: Pick of the Litter (2018, not rated) is a warm and fuzzy documentary that follows five puppies training to become guide dogs for the blind.

Available Saturday night is Morgan Neville’s touching documentary Won’t You Be My Neighbor? (2018, PG-13), which celebrates the life and legacy of Fred Rogers.

Rosamund Pike and Daniel Brühl star in 7 Days in Entebbe (2018, PG-13), a thriller about the 1976 hijacking and rescue mission.

Kevin Costner’s Open Range (2003, R) was overlooked in its day but I think that the laconic, old-school western with Annette Benning and Robert Duvall is better and more mature a film than his Oscar-winning Dances With Wolves.

New to Acorn TV this week is the 2015 romantic comedy series Together (2015) with Jonny Sweet and Cara Theobold and the made-for-TV BBC feature Cider with Rosie (2015, not rated) with Samantha Morton.