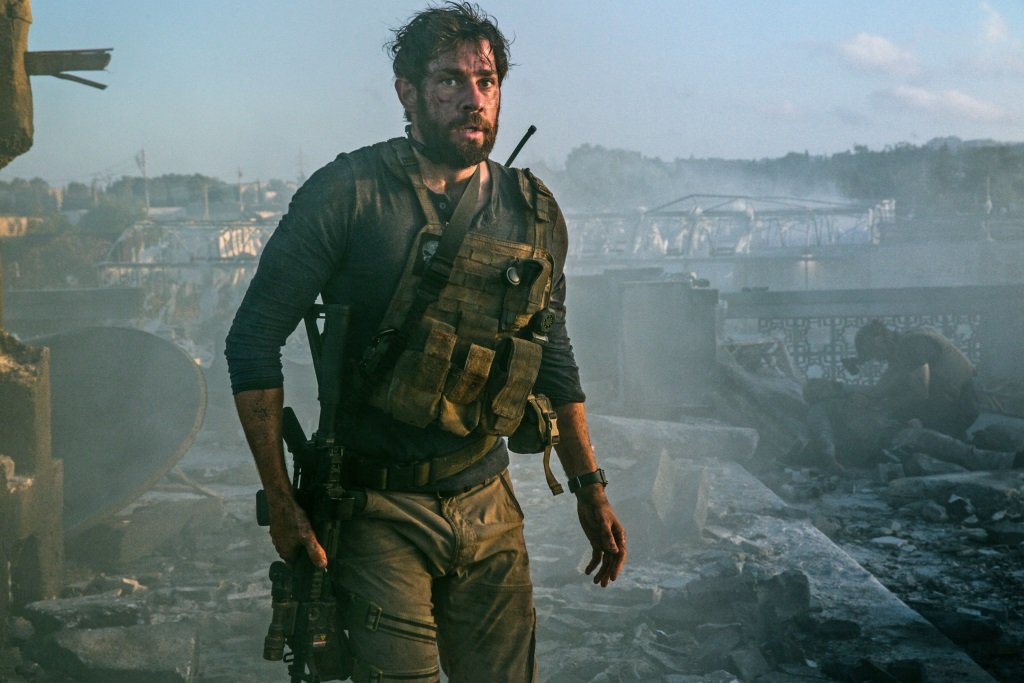 John Krasinski is the fifth actor to play Tom Clancy’s Jack Ryan, the CIA analyst turned reluctant field agent, and Wendell Pierce his new boss in the debut season of the Prime Original series based on Clancy’s bestselling novels. This series, which is set in the post-9/11 world but begins in Ryan’s early years, presents a single mission over the eight-episode season.

“It’s … fine,” confesses Linda Holmes for NPR. “If you think what television needs is more things blowing up, more people getting mowed down by guns, more tense meetings in which the smart guys who have it all figured out try to get through to people who just don’t get it? Then this might be for you. It certainly benefits from Pierce especially, who can take any scene, however underwritten, and transform it into one man’s battle against idiots.”

Carlton Cuse and Graham Roland (both veterans of Lost) developed the series and Morten Tyldum (The Imitation Game) directs the pilot. The entire season now streaming Amazon Prime Video, with a second season confirmed for next year.

Disobedience (2018, R) stars Rachel Weisz and Rachel McAdams as women in love in London’s Orthodox Jewish community but this film is less a romance than a compassionate of family and identity. The English language debut of award-winning Chilean filmmaker Sebastián Lelio (A Fantastic Woman) co-stars Alessandro Nivola and Allan Corduner. Now streaming on Amazon Prime Video.

The Netflix crime thriller Ozark: Season 2 sends its urban couple (Jason Bateman and Laura Linney) deeper into the Missouri crime world as they launder money for the mob. Ten episodes streaming on Netflix.

The second season of The Good Place with Kristen Bell and Ted Danson, the smartest, funniest comedy on network TV, is now streaming to Netflix. If you haven’t caught it yet, you have time to see both seasons before the third season debuts next month.

The Padre (2018, R), starring Tim Roth as an American con man posing as a priest in a small Colombian town, opens on VOD a month before theaters.

Available same day as select theaters nationwide is horror film Boarding School (2018, R) with Will Patton and Samantha Mathis and documentary Pick of the Litter (2018, not rated) on training guide dogs for the blind.

Also new: hip-hop comedy The After Party (2018, TV-MA) and psychological thriller Prodigy (2017, not rated) about a nine-year-old genius under maximum security.

Foreign TV: for fans of Nordic noir there is Deadwind: Season 1 (Finland, with subtitles), a twelve-episode murder mystery. Also new:

Two new takes on the American western are now streaming: Jessica Chastain is a 19th century portrait painter who befriends Sitting Bull in Woman Walk Ahead (2018, R) and Ron Perlman and Martin Starr are lawmen in the comic modern western The Escape of Prisoner 614 (2018, R).

Revisit the films that made Steve McQueen the coolest superstar of the 1960s, the epic western The Magnificent Seven (1960) and World War II prison break classic The Great Escape (1963), both with Charles Bronson and James Coburn and directed by John Sturges.

More classics: also newly arrived are the big Oscar winners In the Heat of the Night with Sidney Poitier and Rod Steiger (1967) and Fiddler on the Roof (1971, G) with Topol, both multiple Oscar winners;

Jennifer Lawrence and Javier Bardem star in Mother! (2017, R), Darren Aronofsky’s passionate but polarizing allegory that mixes the Bible and creation myths with themes of artistic creation, feminism, and environmentalism. I’m not a fan of the film, which I find pretentious and both obvious and confused, but I also appreciate the ambition and confess that I’m glad that there are filmmakers that still take chances like this. On Prime Video and Hulu.

The documentary Active Measures (2018, not rated) investigates the Russian interference of the 2016 American presidential election.

Get an eighties flashback with the original The Terminator (1984, R) with Arnold Schwarzenegger and teen comedy Sixteen Candles (1984, PG) with Molly Ringwald.

Father Figures (2017, R) stars Owen Wilson and Ed Helms as brothers on a road trip to track down their mother’s old boyfriends and find their biological father. Glenn Close plays their mother, who they discover has a wild side in her youth, and Terry Bradshaw, Ving Rhames, J.K. Simmons, and Harry Shearer co-star.

Available Saturday night is the animated adventure Ferdinand (2017, PG) and Miss Sherlock, a new mystery series from Japan will be available on HBO streaming channels as of Saturday morning.

Viggo Mortensen is a devoted father home-schooling his kids off the grid in Captain Fantastic (2016, R), a drama of an alternative family coming to grips with loss, rebellion, and the world outside their little Walden. It was partially shot in Washington and Oregon. Reviewed on Stream On Demand here.

Alfred Hitchcock never made a more purely entertaining film than North by Northwest (1959), a classic “wrong man” thriller with a romantic cast and a breathless series of adventures on a cross-country romp. Cary Grant, long past his days as a matinee idol, is effortlessly suave and charming and completely convincing as a glib, sheltered New York businessman who, in a purely random twist of fate, is mistaken for a master spy. Suddenly his safe routine is turned upside down by armed thugs, foreign agents (James Mason), and a beautiful femme fatale (Eva Marie Saint, utterly seductive). Everything clicks and sly fox Hitch slides more sexual innuendo and erotic flirtation into the film than most R-rated films accomplish, while the breezy smoothness hides an undercurrent of tension and a complete mistrust of authority. It features some of Hitchcock’s greatest set pieces (from fleeing a malevolent crop duster in a remote cornfield to scrambling across the faces of Mount Rushmore) plus sparkling dialogue and a magnificent score by Bernard Herrmann.

It’s the TCM Select Pick of the Week and one of thirteen features in the “Star of the Week: Cary Grant” spotlight, which also includes screwball classic Bringing Up Baby (1938) with Katharine Hepburn, brawny adventure Gunga Din (1939) with Douglas Fairbanks Jr., and romantic drama The Bishop’s Wife (1947) with Loretta Young.

A Place to Call Home: The Final Chapter is the sixth and final season of the Australian drama starring Marta Dusseldorp as a nurse working for a wealthy family in post-World War II Australia. The first two episodes are now available, new episodes roll out each Monday starting September 10.

Douglas Henshill stars in the miniseries In Plain Sight (2016), based on the true story of the hunt for Scotland’s first serial killer in the 1950s.

This presentation of the Olivier Award-winning musical Jerry Springer: The Opera features the original London cast in a performance recorded at the Cambridge Theatre in 2005.