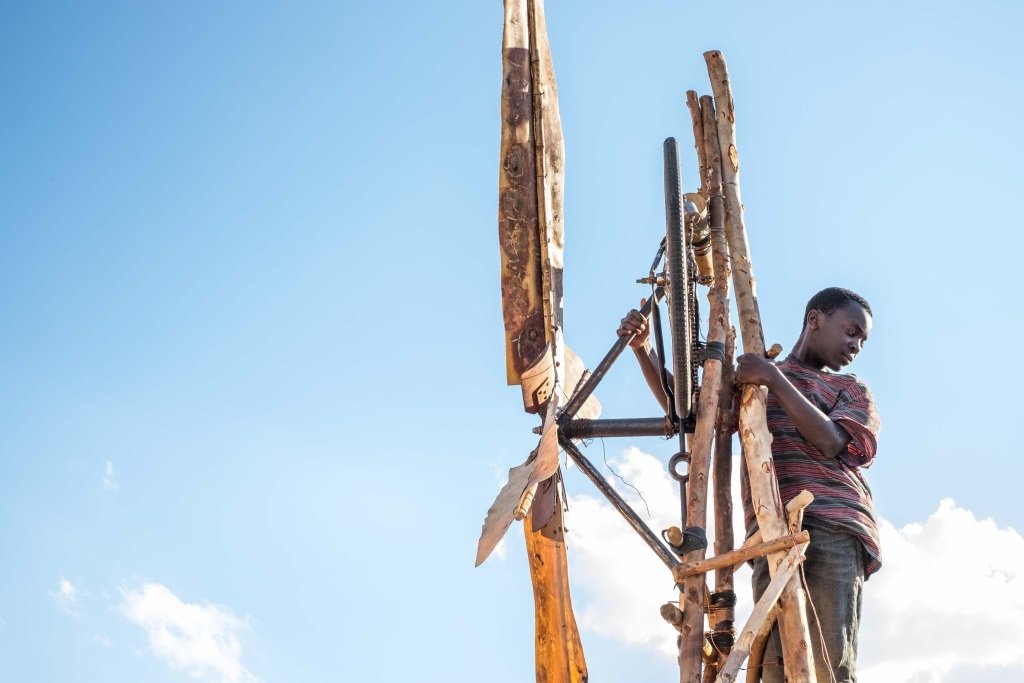 Oscar-nominated actor Chiwetel Ejiofer directs and stars in The Boy Who Harnessed the Wind (2019, not rated), the story of a 13-year-old Malawi boy who builds a wind turbine to save his rural African village during a drought. Credit the “loving attention to the region’s cultural and geographic specificities and refusal of downplaying the hardships that slowly and fatally fatigue Kamkwamba’s village in Wimbe,” praises Tomlis Laffly for RogerEbert.com. “More than anything, Ejiofor treats his film not as a fairy tale, but as a life-or-death survival story.”

The film, based on a true story, comes direct to Netflix after its award-winning Sundance Film Festival premiere.

Kate Beckinsale is The Widow, who travels from Wales to The Congo to look into questions of her husband’s death and faces violent opposition in her investigation, in the new Prime Original series. Alex Kingston and Charles Dance costar in the American-British coproduction. Robert Lloyd, reviewing the series for The Los Angeles Times, calls it “a compelling puzzle, a potato-chip show — as soon as you finish one episode, you reach for another.”

London Kills in the British crime drama starring Hugo Speer as the head of an elite police detective team. Each episode of the first series focuses on a different murder investigation but one mystery hangs over the show: the unsolved disappearance of the team leader’s wife. It’s “veddy British murder mystery series with a bit of American procedural DNA,” according to AARP reviewer Tim Appelo. “Five episodes, five murders, rather addictive.”

Free Solo (2018, PG-13), which chronicles the first free solo climb of Yosemite’s El Capitan Wall, is available on Cable On Demand, VOD, and DVD days after winning the Academy Award for best documentary.

Foreign language pick: The Guilty (Denmark, 2018, R, with subtitles) creates riveting drama without ever leaving an emergency dispatch center, where a police officer (Jakob Cedergren) demoted to desk duty races time to save a kidnapped woman with only a phone as his connection to the case. Streaming on Hulu.

News: Hulu has dropped the price in its basic, limited-commercial subscription plan from $7.99 to $5.99 a month, hoping to attract customers from Netflix after the dominant streamer’s recent price increase.

The Oscar-nominated animated adventure Ralph Breaks the Internet (2018, PG) sends the misfit heroes of “Wreck-It Ralph” into the worldwide web and Saoirse Ronan and Margot Robbie are rivals for the British throne in the historical drama Mary Queen of Scots (2018, R), which earned Oscar nominations for costumes and production design. On Cable On Demand and VOD, plus DVD and at Redbox

William Baldwin stars in the Canadian family drama Northern Rescue as a widower who takes his three teenage children from Boston to rural Ontario and takes command of the local Search & Rescue department.

Michael Fassbender and Brendan Gleeson star in the British crime drama Trespass Against Us (2016, R) and the American Indie revenge drama Blue Ruin (2013, R) won an award at the Cannes Film Festival.

Foreign affairs: a surgeon seeks revenge against the men who brutally beat his son on the drama Your Son (Spain, 2018, not rated, with subtitles), which comes to Netflix from its theatrical run in Spain. Also new:

Streaming TV: Losers: Season 1 looks at the psychology of losing through the stories of athletes who faced high profile defeats and Cricket Fever: Mumbai Indians: Season 1 (India, with subtitles) follows one team through a season in the world’s toughest cricket league.

George Clooney is The American (2010, R) in Anton Corbijn’s cool, continental thriller about a professional assassin in Europe.

Streaming TV: David E. Kelley’s The Practice: Complete Series (1997-2004) was one of the first legal dramas to embrace the fact that lawyers represented guilty clients as well as the innocent. But its most enduring legacy is arguably the introduction of James Spader’s eccentric Alan Shore and William Shatner’s Denny Crane, who jumped from the show’s final season to anchor spin-off Boston Legal: Complete Series(2004-2008), a show that leaned heavy on humor. Both are now streaming on Amazon along with military drama The Unit: Complete Series (2006-2009), created by David Mamet, and family show Little House on the Prairie: Complete Series (1974-1983).

Angourie Rice is a teenage girl who falls in love with a person who inhabits a new body every day in Every Day (2018, PG-13), based on the young adult romance by David Levithan (Prime Video and Hulu).

The Canadian crime drama Murdoch Mysteries: Seasons 1-9 (2008-2016) stars Yannick Bisson as a as a CSI-like police detective in 1890s Toronto.

Treehouse (2019, not rated), the sixth feature-length episode of the Hulu Original horror anthology Into the Dark, stars Jimmi Simpson as a celebrity chef trying to escape a tabloid scandal.

The three-part documentary series Around the Way explores the Black experience in Atlanta, Los Angeles, and New York.

More streaming TV: Archer: Danger Island is the ninth episode of the animated spy TV spoof and Queen Sugar: Season 3 arrives from the cable channel OWN.

Batman Begins (2005, PG-13) with Christian Bale and the sequel The Dark Knight (2008, PG-13), costarring Heath Ledger as The Joker, are still among the best superhero movies of the 21st century. Also new:

The new series The Shop features LeBron James and Maverick Carter in free-for-all conversation with sports and entertainment figures in various barbershops around the country. New episodes arrive Friday nights.

Gabrielle Union stars in the thriller Breaking In (2018, PG-13) as a mother fighting to save her family from home invaders.

Among the older films returning to HBO this month are Date Night (2010, PG-13) with Steve Carell and Tina Fey;

Arriving Saturday night is Skyscraper (2018, PG-13) with Dwayne Johnson taking on criminals in a towering inferno in China.