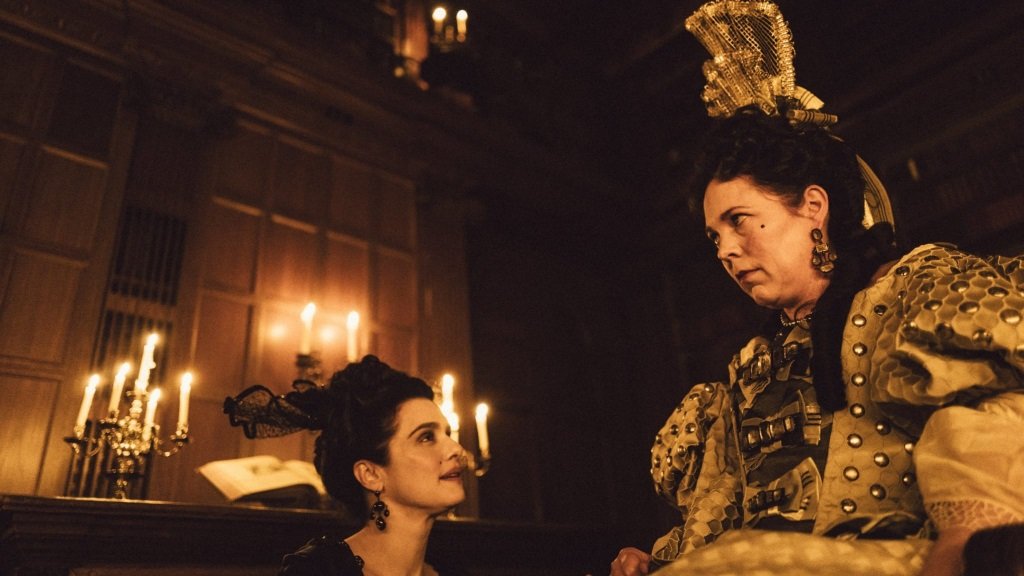 Olivia Colman (soon to take over the role of Queen Elizabeth in the Netflix series The Crown) won the best actress Oscar for playing the lonely, tormented Queen Anne in The Favourite (2018, R), a darkly satirical historical drama costarring Oscar nominees Rachel Weisz and Emma Stone. On Cable On Demand and VOD, also on DVD and at Redbox

Juanita (2018, not rated), a romantic comedy based on Sheila Williams’s novel “Dancing on the Edge of the Roof,” stars Alfre Woodard as a working class woman who leaves the grown children she’s supporting and hits the road to find herself. Now streaming on Netflix.

Ricky Gervais writes, directs, and stars in After Life: Season 1 as a nice guy who turns rude and belligerent to deal with his grief after the death of his wife. TV Insider critic Matt Roush finds the series “Unexpectedly moving… Star-director-writer Gervais curbs the maudlin impulses that made his previous Netflix series, Derek, such a chore, finding sharp humor in Tony’s outrageous outbursts over petty grievances.”

Classic picks: Alfred Hitchcock’s Strangers on a Train (1951), a thriller of nightmarish wish fulfillment starring Robert Walker as a demented playboy, is one of the great films from the master of suspense. Reviewed on Stream On Demand here.

Robert Mitchum is a demonic con man in preacher man’s robes in The Night of the Hunter (1955), one of the most beautiful pastoral nightmares the cinema has seen. On Amazon Prime Video.

News: Hulu has dropped the price in its basic, limited-commercial subscription plan from $7.99 to $5.99 a month, hoping to attract customers from Netflix after the dominant streamer’s recent price increase.

Julia Roberts is the concerned mother of a drug-addicted son (Lucas Hedges) in Ben Is Back (2018, R). Also on DVD and at Redbox.

Available same day as select theaters nationwide is the drama I’m Not Here (2017, not rated) starring J.K. Simmons as an alcoholic contemplating suicide and documentary Time for Ilhan (2019, not rated) about Congresswoman Ilhan Omar.

Ewan McGregor is the grown-up Christopher Robin (2018, PG) who gets a little help from Winnie the Pooh and other childhood friends in this family adventure fantasy. And there are more family friendly films this week:

Supernatural TV: The Order: Season 1 drops a college student in the midst of a war between witches and werewolves and Immortals: Season 1 (Turkey, with subtitles) pits a vengeful vampire against the king of the undead. Both are Netflix Original series.

Foreign affairs: Cécile de France stars in Lady J (2019, France, with subtitles), a historical costume drama with a twist of revenge from the novel by Denis Diderot, originally released in France as “Mademoiselle de Joncquières.

What We Do In the Shadows (2015, R) is a hilarious mockumentary of vampire roommates stuck in New Zealand from filmmakers and stars Taika Waititi and Jemaine Clement.

I Can Only Imagine (2018, PG) dramatizes the true story behind the inspirational hit song the Christian rock band MercyMe (Prime Video and Hulu).

Where Hands Touch (2018, PG-13) is a drama about a bi-racial teenage girl (Amandla Stenberg) struggling to survive in Nazi Germany.

Foreign affairs: Daniel Auteuil and Gérard Depardieu star in The Closet (France, 2001, R, with subtitles), a comedy by Francis Veber.

True stories: The Panama Papers (2018, not rated) digs into the global corruption scandal and the efforts of hundreds of journalists to break the story.

Leaving Neverland (2019, not rated) gives voice to two men who tell their stories of being abused by Michael Jackson when they were adolescents.

Dwayne Johnson takes on criminals in a towering inferno in China in Skyscraper (2018, PG-13).

From HBO Asia comes the historical drama Grisse about the 19th century rebellion against colonial government of Dutch India.