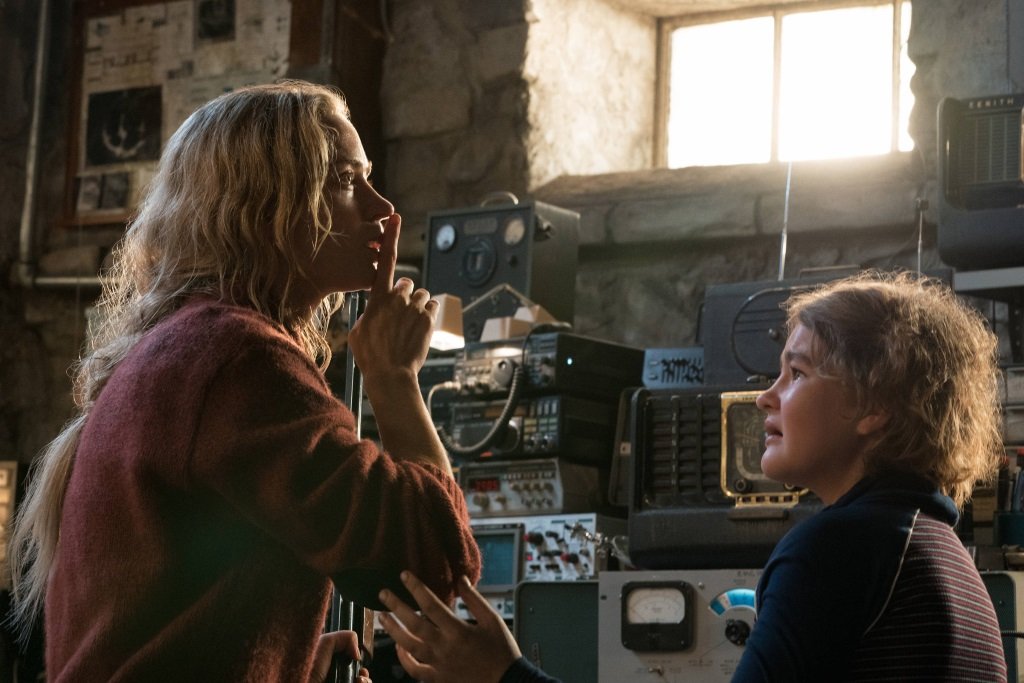 A Quiet Place (2018, PG-13), starring Emily Blunt and John Krasinski (who also directs) as parents in the apocalypse, is a horror film with a high-concept premise (alien invaders hunt humans by sound) but behind the jumps and monster-movie spectacle is a terrific cinematic used of sound and a drama rooted in guilt and love and the drive to protect family at all costs. On Amazon Prime Video and Hulu.

The Burial of Kojo (Ghana, 2019, not rated, with subtitles), a mix of thriller and fable about a girl who embarks on a magical journey to save her father trapped in a collapsed illegal mine, debuts on Netflix after a limited theatrical release.

The first two episodes of the reboot of The Twilight Zone, hosted by Jordan Peele, are now streaming, with new episodes each Thursday on CBS All Access. You can watch the first episode for free on YouTube.

True stories: the natural history series Our Planet, which features spectacular nature footage, comes from the director of “Planet Earth” with narration by Sir David Attenborough. 8 episodes on Netflix.

The Criterion Channel, a streaming service built from the ashes of Filmstruck, launches next week. Sign up before April 8 to receive a 30-day free trial period and a reduced subscription price.

Vice (2018, R), a satirical political biopic starring Christian Bale as Dick Cheney, was nominated for eight Academy Awards and won the Oscar for makeup. Bale’s transformation is impressive but I find Clint Eastwood’s The Mule (2018, R), based on the true story of an octogenarian drug runner for a Mexican cartel, more moving and resonant. Also new:

Available same day as select theaters nationwide is the British drama Mum’s List (2019, not rated) based on best-selling novel by St John Green and starring Rafe Spall and Emilia Fox;

Oscar-winning actress Brie Larson makes her directorial debut with the quirky modern fairy tale Unicorn Store (2017, not rated) and costars with her “Captain Marvel” buddy Samuel Jackson. It comes to Netflix over a year after its Toronto Film Festival debut.

More streaming TV: How to Get Away with Murder: Season 5 with Viola Davis;

Animated TV: Ultraman: Season 1 (Japan) follows the son of the famous protector of Earth as he takes up his father’s mantle. Also new is Trailer Park Boys: The Animated Series, which picks up where the long-running live action Canadian comedy left off.

The anthology film Rio, I Love You (2016, R, with subtitles) presents romantic encounters in Rio de Janeiro from 11 international directors and dozens of actors.

Martin Scorsese’s Raging Bull (1980, R) won Oscars for actor Robert De Niro and editor Thelma Schoonmaker and was named the best America film of the eighties in an AFI poll.

Classics: Roman Polanski’s Chinatown (1974, R) with Jack Nicholson and Faye Dunaway and epic western The Magnificent Seven (1960, PG) with Yul Brynner and Steve McQueen are back in the line-up. And while it’s not exactly a classic, Beach Blanket Bingo (1965) with Frankie Avalon and Annette Funicello is as dizzy and silly as the sixties beach movies get.

More streaming TV: David Morrissey is a police detective who crosses dimensional borders in the sci-fi British mystery miniseries The City and the City (2018), based on the cerebral novel by China Miéville. Also new:

Foreign affairs: Gianni de Gregorio directs and stars in the comedy The Salt of Life (Italy, 2011, not rated, with subtitles) as a sad-sack retiree attempting to spice up his love life and Barbara Sukowa stars in Vision: From the Life of Hildegard von Bingen (Germany, 2009, not rated, with subtitles), Margarethe von Trotta’s drama about the visionary 12th century German nun.

Will Ferrell stars in Everything Must Go (2010, R), a serious comedy based on a short story by Raymond Carver (Prime Video and Hulu).

Maxine Peake stars in Funny Cow (2017, not rated), a comic drama about a female comedian fighting the male-dominated stand-up culture in 1970s and 1980s Northern England.

Siblings face increasingly extreme practical jokes in I’m Just F***ing With You (2019, not rated), the April Fool’s Day installment of the Hulu Original horror series Into the Dark.

True stories: Chef Flynn (2018, not rated) profiles a successful 20-year-old chef in New York City and Project Nim (2011, PG-13), about a seventies experiment in raising a chimp like a human child, is more revealing of human than simian behavior.

Kid stuff: Happy Feet (2006, PG) is an Oscar-winning animated feature and the rousing Akeelah and the Bee (2006, PG) dramatizes a young girl’s odyssey to the National Spelling Bee finals.

A Quiet Place, Hulu, Netflix, The Burial of Kojo, VOD