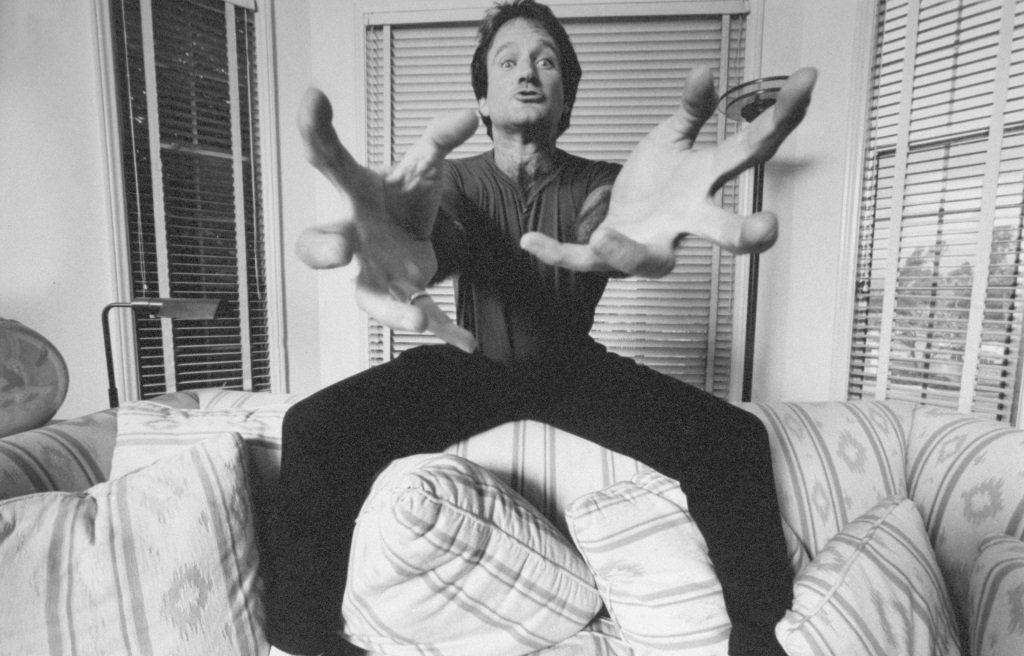 Robin Williams: Come Inside My Mind (2018, TV-MA) is an affectionate portrait of the actor and groundbreaking comedian narrated by Williams himself (created from interview clips) and featuring testimony from family, friends, and fellow professionals, but the highlights of the production are revealing outtakes from films and TV shows and rare performance footage from his stand-up act. On all HBO streaming services.

Set and shot in Seattle, Megan Griffith’s Lucky Them (2013, R) stars Toni Collette (Hereditary) as a music journalist revisiting the legacy of a Kurt Cobain-like rock legend. It’s an indie buddy film and road movie (Thomas Haden Church invites himself along) and a great portrait of urban Seattle, which has never looked this good in the movies. Streaming on Hulu.

An ordinary girl get temporary magical powers in the animated fantasy Mary and the Witch’s Flower (Japan, 2017, PG), adapted from the children’s novel by Mary Stewart and directed by former Studio Ghibli animator Hiromasa Yonebayashi. Kate Winslet and Jim Broadbent are featured in the English language version now on Netflix. Reviewed on Stream on Demand here.

The fourth and final season of UnREAL, the savage satire of reality TV starring Shiri Appleby and Constance Zimmer as the manipulative producers of a Bachelor-style show, debuts on Hulu ahead of its expected run on Lifetime.

Disobedience (2018, R) stars Rachel Weisz and Rachel McAdams as women in love in London’s Orthodox Jewish community but this compassionate drama is less a romance than a drama of family and identity. The English language debut of ward-winning Chilean filmmaker Sebastián Lelio (A Fantastic Woman) co-stars Alessandro Nivola and Allan Corduner. On Cable On Demand and VOD, also on DVD and at Redbox.

Wes Anderson returns to stop-motion filmmaking for Isle of Dogs (2018, PG-13), a playful fantasy adventure set in a near-future Japan. Also on disc and at Redbox. Also new:

Emma Watson and Daniel Bruhl star in Colonia (2015, R) as a couple escaping a religious cult-turned-political prisoner camp in Chile during the Pinoche coup.

It’s David Spade versus Nat Faxon in the Netflix Original comedy Father of the Year (2018, not rated).

The offbeat musical comedy Wanderland (2018, not rated) follows one man’s odyssey through Hamptons in the off-season.

Kid stuff: the animated comedy Igor (2008, PG) features the voice of John Cusack as the hunchbacked assistant aspiring to be a mad scientist in his own right.

Foreign affairs: Kim Jee-won’s action-packed adventure The Good, the Bad, the Weird (South Korea, 2008, R, with subtitles) is a self-proclaimed “Oriental Western.” The trippy Embrace of the Serpent (Colombia, 2015, not rated, with subtitles) charts the meeting of cultures through the story of an Amazon shaman and two western scientists.

Emma Stone and Steve Carell play Billie Jean King and Bobby Riggs in Battle of the Sexes (2017, PG-13), the story behind the legendary tennis match of the 1970s and a look at a defining public moment in the equal rights movement.

Arriving Saturday night is the Scandinavian murder mystery The Snowman (2017, R), based on the Jo Nesbo novel and starring Michael Fassbender and Rebecca Ferguson.

Reese Witherspoon stars in the romantic comedy Home Again (2017, PG-13) as a single mother who invites a handsome twentysomething (Nat Wolff) and his two brothers to share her vast Los Angeles home.

TCM Select Pick of the Week is The Philadelphia Story (1940), starring Katherine Hepburn in her Hollywood comeback just a couple of years after she was branded “box-office poison.” She marched back to the big screen with the screen rights to The Philadelphia Story, the hit play written for her by Philip Barry, and Cary Grant and James Stewart, two of Hollywood’s greatest leading men, on her arms. It’s almost impossible to pull off the play anymore because the parts are so wedded to the performers: the imperious Hepburn as society maven Tracey Lord, cocky Cary Grant pouring on the charm as the ex-husband who still loves her, and Jimmy Stewart as the cynical reporter who falls for her. This is MGM gloss at its most unassuming, with sparkling direction by Hepburn’s good friend George Cukor. The classy hit comedy earned six Oscar nominations and won two, for actor James Stewart and Donald Ogden Stewart’s screenplay. Co-stars Ruth Hussey, John Howard, and Roland Young. Streaming through December 27, 2018

It’s one of the best films from “Director of the Week: George Cukor,” a collection of 19 films including the proto-“Star is Born” comic melodrama What Price Hollywood? (1932) with Constance Bennett, David Copperfield (1935) with Freddie Bartholomew and W.C. Fields, Oscar-winning thriller Gaslight (1944) with Ingrid Bergman and Charles Boyer, and Oscar-nominated musical drama A Star is Born (1954) with Judy Garland and James Mason, the grandest of all versions of the evergreen story.

“Star of the Week: Sophia Loren” is celebrated with 12 features, including Two Women (Italy, 1960, with subtitles), which earned Loren an Oscar for best actress, and the classic sex comedies Yesterday, Today and Tomorrow (Italy, 1963, with subtitles) and Marriage – Italian Style (Italy, 1964, with subtitles) co-starring Marcello Mastroianni, plus a short film and an interview.

Hidden (Craith in Welsh), from the creators of “Hinterland,” is a gritty new Welsh crime drama starring Sian Reese-William, makes its stateside debut just weeks after showing in the UK. All eight episodes now streaming.