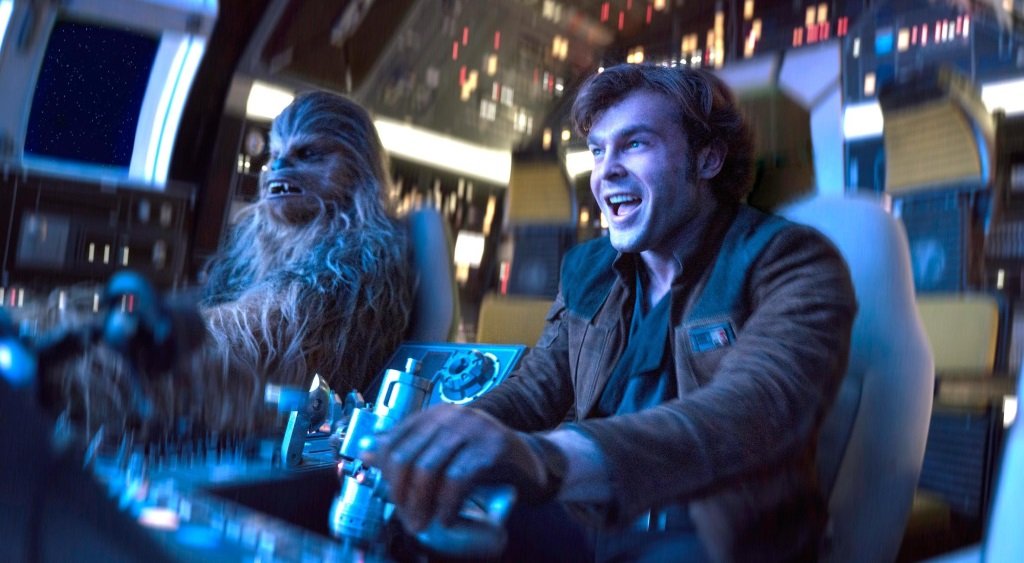 Alden Ehrenreich is a young Han Solo in Solo: A Star Wars Story (2018, PG-13), a prequel from a galaxy far, far away. As much galactic heist adventure as space opera, it co-stars Woody Harrelson, Thandie Newton, and Donald Glover as young Lando Calrissian, and it shows how Han met Chewbacca and won his pride and joy: The Millennium Falcon. Now streaming on Netflix.

Liam Neeson once again uses his particular set of skills in The Commuter (2018, PG-13), a conspiracy thriller set on a runaway train. It’s the unlikely action star’s fourth film with director Jaume Collet-Serra (Non-Stop) and they really have the formula down by now. Prime Video and Hulu.

A Pakistani-British civilian is pressured into becoming an informant by a counter-terrorist officer (Paddy Considine) in Informer: Season 1, a BBC thriller set in the murky world of the war on terror. It debuts stateside on Amazon Prime Video.

Actor/writer Jonah Hill makes his directorial debut with Mid90s (2018, R), a semi-autobiographical comedy-drama young teens in the skateboarding culture of the 1990s.

Also new are the family-centered dramas Wildlife (2018, PG-13) with Jake Gyllenhaal and Carey Mulligan and What They Had (2018, R) with Hilary Swank and Michael Shannon and comedy The Oath (2018, R) with Ike Barinholtz and Tiffany Haddish.

The Last Laugh (2019, not rated) is a Netflix Original starring with Chevy Chase as a retired talent agent who escapes from his retirement with his very first client (Richard Dreyfuss) for a geriatric comedy tour. Andie MacDowell and Kate Micucci co-star.

Olga Kurylenko confronts ancient demons in Mara (2018, not rated) and Zoe Kazan is a mother protecting her daughter from The Monster (2016, not rated) in two new horror additions.

The animated monster movie Godzilla: The Planet Eater (Japan, 2018) comes to Netflix from its theatrical run in Japan and concludes the trilogy begun with Godzilla: Planet of the Monsters and continued in Godzilla: City on the Edge of Battle. All offer the choice of original Japanese and dubbed soundtracks.

Streaming TV: four military veterans reunite in When Heroes Fly: Season 1 (Israel, with subtitles) to search for a missing friend. Also new is the comedy Friends from College: Season 2.

True stories: Pope Francis: A Man of His Word (2018, PG) profiles the pontiff and his message of peace and healing. Also new is ReMastered: Massacre at the Stadium (2019, not rated), which revisits the murder of Chilean protest singer Victor Jara.

Foreign affairs: based on a true story, Solo (Spain, 2018, not rated, with subtitles), follows a surfer’s fight for survival after a fall from a cliff on a remote beach.

Stanley Baker, Jack Hawkins, and Michael Caine star in Zulu (1964) as British soldiers in the 19th century under attack in a remote African outpost.

Kid stuff: children play-act war as rival pirate gangs in Swallows and Amazons (2017, not rated), a family adventure based on the British children’s novel by Arthur Ransome.

Streaming TV: it’s not quite the entire series but Amazon has Law & Order: Special Victims Unit: Seasons 1 + 5-19 with Mariska Hargitay, Ice-T, and Christopher Meloni. That’s over 350 episodes of justice.

Adam Scott and Taylor Schilling are easy-going parents pushed past their comfort zone by adventurous new neighbors in the comedy The Overnight (2015, R) (Prime Video and Hulu).

The Dude abides, sort of, in a surf bum burn-out named Dud (Wyatt Russell) who finds his tribe in Lodge 49, the offbeat comedy series from AMC. The first season is now on Hulu.

Also new are The Split: Season 1, a British drama starring about Nicola Walker and a family of female divorce lawyers, and the second season of Hulu Original science fiction comedy Future Man.

Brian Cox and the Broken Lizard comedy troupe return in Super Troopers 2 (2018, R), the sequel to the cult comedy hit.

Jessica Chastain stars as Molly Bloom, the Olympic-class skier who ran the world’s most exclusive high-stakes poker game, in Molly’s Game (2017, R). Oscar-winning screenwriter Aaron Sorkin made his directorial debut with this drama based on Bloom’s memoir.

Available Saturday night is the comedy I Feel Pretty (2018, PG-13) with Amy Schumer.