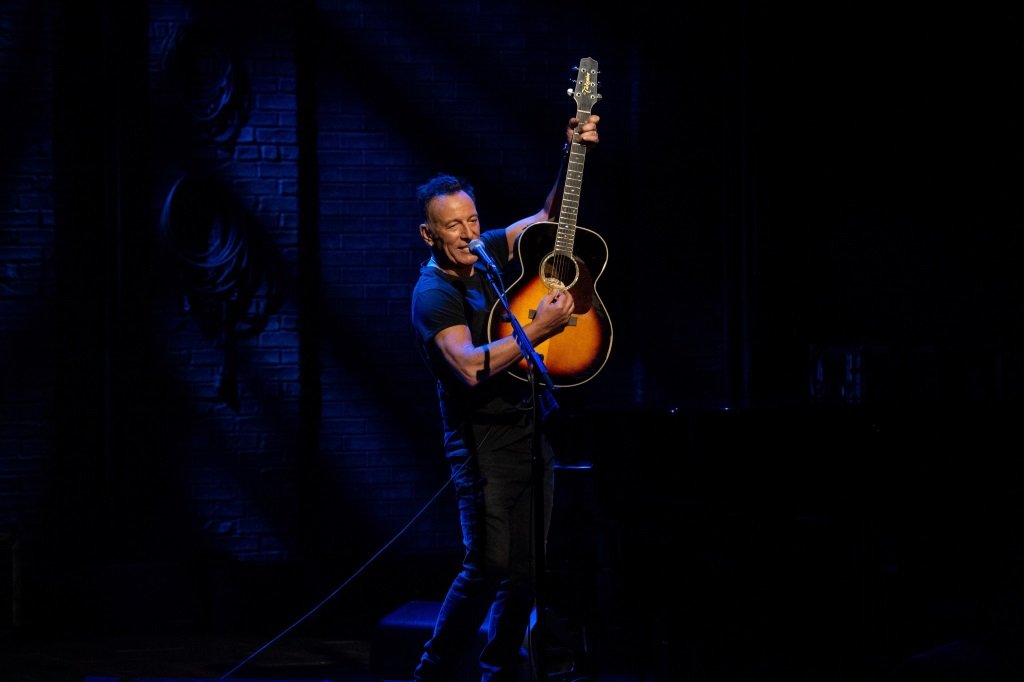 The one-man show Springsteen on Broadway(2018, not rated), featuring Bruce Springsteen sharing personal stories and performing acoustic versions of his music, has been one of the hottest tickets during its brief run. Netflix members can now get a front row seat in this exclusive recording of the intimate, stripped down live show.

Mike Hale, reviewing the special for The New York Times, writes that this presentation is “a master class in pacing, dynamics, modulation of volume and tone, and the film brings you right up onstage with Springsteen, giving you a more intimate view of his technique — understated, seemingly casual but absolutely controlled — than you could get in the theater.”

Olivia Cooke is Becky Sharp in the mini-series Vanity Fair (2018), based on the satirical novel by William Makepeace Thackery about a poor but plucky girl who becomes a scheming social climber in 19th century society. It costars Tom Bateman, Anthony Head, Martin Clunes, and Michael Palin as Thackery.

“Yet this Becky is lovable, thanks to the magnetic Cooke, whose performance as a teen sociopath in this year’s Thoroughbreds proved she could humanize just about anyone,” writes Judy Berman for Time. “All bugged-out eyes and buoyant spirits, her Miss Sharp is the smartest, most beguiling person in every room; it becomes thrilling to watch her manipulate them.”

The British coproduction is streaming on Amazon Prime Video.

Anna Kendrick stars as an overachieving single mom turned detective when her chic new best friend (Blake Lively) disappears in A Simple Favor (2018, R), a witty murder mystery with a light touch. On Cable on Demand and VOD, also on DVD and at Redbox.

Classic picks: get into the holiday spirit with perennial favorites It’s a Wonderful Life (1946), Frank Capra’s redemptive dark Christmas with a rousing climax starring Jimmy Stewart and Donna Reed, on Prime Video and White Christmas (1954), the colorful musical with Bing Crosby and Danny Kaye, on Netflix.

Tom Hardy is Venom (2018, PG-13) in the violent “Spider-Man” spin-off about an alien who turns its human host into a monstrous, flesh-eating creature. Also on DVD and at Redbox. Also new:

Sandra Bullock stars in Bird Box (2018, not rated), an end-of-the-world thriller on an intimate scale directed by Susanne Bier. The film co-stars Sarah Paulsen and John Malkovich and arrives on Netflix a week after a limited release in theaters.

Eddie Redmayne won the Academy Award for his portrayal of physicist Stephen Hawking in The Theory of Everything (2014, PG-13).

Perfume: Season 1(Germany, with subtitles) is a new adaptation of Patrick Suskind’s bestselling novel, updated to the present and reworked as a detective series about a murdered singer and a killer who turns human scents into exclusive fragrances. Six episodes.

Streaming TV: you can catch up with Lucifer: Seasons 1-3, the cop drama filled with angels and demons, as Netflix prepares to take over the series for its upcoming fourth season. Also new:

Life Itself (2018, R), a sentimental family melodrama written and directed by This Is Us” creator Dan Fogelman, was one of the worst reviewed films of the year, despite a superb cast that includes Oscar Isaac, Olivia Wilde, Annette Bening, and Mandy Patinkin.

Streaming TV: the comedy competition show LOL – Last One Laughing: Season 1 (Mexico, with subtitles) pits comedians against each other. New episodes each Friday. Also new: the second season of the crime drama 4 Blocks (Germany, with subtitles), set in the Arab community in Berlin.

True stories: Ex Libris: The New York Public Library (2017, not rated) is documentary filmmaking legend Frederick Wiseman’s in-depth look into the workings of one the biggest public libraries in the world.

A Most Wanted Man (2014, R), based on the John le Carré novel, is a complex thriller of politics and intelligence in the post-9/11 world. Philip Seymour Hoffman (in his final film role) is superb as the head of a covert German intelligence team that monitors potential terrorist activity, a devoted patriot with a moral code in a culture of self-interest and power politics. Reviewed on Stream On Demand here. Prime Video and Hulu.

Jennifer Aniston and Tim Robbins star in the crime comedy Life of Crime (2014, R), based on a novel by Elmore Leonard (Prime Video and Hulu).

Matthias Schoenaerts is a psychologically scarred bodyguard whose obsessive protection of his charge (Diane Kruger) becomes dangerously delusional in Disorder (France, 2016, not rated, with subtitles). Reviewed on Stream On Demand here.

The indie drama Skate Kitchen (2018, R) is set in the skateboarding culture of teenage girls in New York City.

Streaming TV: The complete second season of the Hulu Original superhero series Marvel’s Runaways, about a team of teenagers who flee their supervillain parents, is now available. Also new:

The documentary Bleed Out (2018, TV-14) looks at the state of American health care and the alarming rate of medical error.

In the viciously funny The Death of Stalin (2018, R), savvy political satirist Armando Iannucci reimagines the scramble for power in the Soviet Union as a savage comedy of petty grudges, unstable alliances, and literal backstabbing. Steve Buscemi is master survivor Nikita Khrushchev and Jeffrey Tambor and Michael Palin co-star.

Helena Bonham Carter and Linus Roache star in the Oscar-nominated drama The Wings of the Dove (1998, R), based on the novel by Henry James.

The British miniseries Blood, a psychological drama starring Adrian Dunbar as a doctor suspected by his daughter of murdering his wife. All six episodes now streaming.

A Christmas Carol Goes Wrong (2017), a BBC holiday comedy special with Diana Rigg and Derek Jacobi, makes its US debut on BroadwayHD.