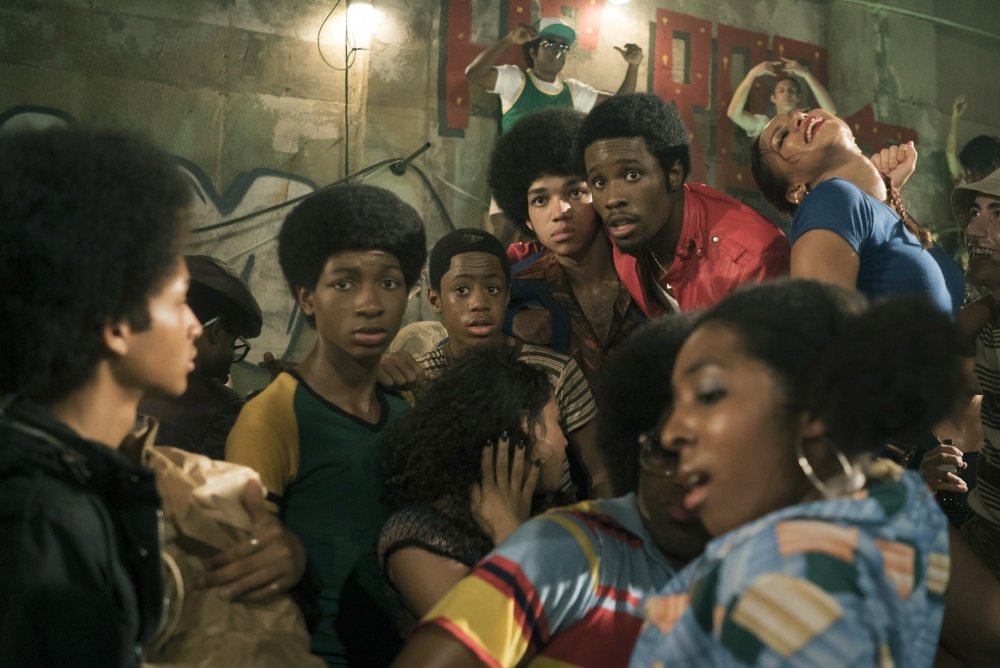 The most expensive Netflix original series to date, The Get Down arrives from creator / co-writer / director Baz Luhrmann (collaborating with Nas, Grandmaster Flash, Nelson George and others) and tells the story of the birth of hip-hip, punk, and disco through the lives of kids in the South Bronx of the seventies. It is an ambitious undertaking and Luhrmann immersed himself in the project, according to articles that have chronicled the project (read more at The Village Voice, The Atlantic, and Indiewire to cite just a few)

The reviews have been mixed (Matt Zoller Seitz describes it as “a spectacular mixed bag” for Vulture) and in some cases ecstatic, notably Indiewire critic Ben Travers: “By taking a musical genre overexposed and misunderstood in the modern day and breaking it down in the past to its component parts, Luhrmann has created a fantastic and fresh blend of his own: a TV show told as a film, a music video told as a six-hour miniseries and an original story holding more truth than most true stories.”

If you end up immersed in it yourself, you can get down even further with recaps by Odie Henderson at Vulture.

The six episodes now available represent “Part 1” of the first season. Queue it up!

A Hologram for the King sends Tom Hanks, a former corporate hotshot with one last shot to redeem himself after a disastrous business decision left him a pariah. It’s based on the novel by Dave Eggers and directed by Tom Tykwer (of Run Lola Run and Cloud Atlas fame). R.

The comic documentary The Million Dollar Duck follows six wildlife artists competing to get their painting on a U.S. stamp. PG.

No Country for Old Men (2007), a dark crime thriller starring Tommy Lee Jones as a veteran Texas Sheriff and Javier Bardem as a sociopathic hitman, earned Oscars for Best Picture, Direction, and Adapted Screenplay for filmmakers Ethan and Joel Coen and Supporting Actor for Bardem. Also on Amazon Prime. R. Reviewed on Stream On Demand here.

From France comes My Golden Days (2015), a bittersweet reverie of childhood memories and coming of age experience from filmmaker Arnaud Desplechin. French with subtitles, R.

Also new: the brash PG-13 comedies St. Vincent (2014) with Bill Murray and Melissa McCarthy and The Confirmation (2016) with Clive Owen.

Ong Bak: The Thai Warrior (2003), a martial arts thriller from Thailand, reminds us that people are the best special effects. What Tony Jaa can do will blow your mind. R. Reviewed on Stream On Demand here.

The World’s Fastest Indian (2005) is a motorcycle. Anthony Hopkins stars in the real-life story of a senior citizen who takes his vintage bike from New Zealand to Utah’s Bonneville Salt Flats in 1967 to set the land speed record. PG-13.

John Boorman’s Queen and Country (2014) follows up Hope and Glory with another autobiographical reverie, this one as a young man in post-war Britain. Not rated.

In Mission Impossible: Rogue Nation (2015), the fifth film in the big screen spy movie franchise, Tom Cruise meets his equal in British agent Rebecca Ferguson. Cruise continues to do his own stunts and the opera house assassination is an elegant and thrilling piece of action cinema. PG-13. On Amazon and Hulu. Reviewed on Stream On Demand here.

American Ultra (2015) turns the “Bourne Identity” into a violent black comedy when amiable stoner Jesse Eisenberg is attacked by a hit squad and discovers he’s a sleeper agent with a killer instinct. Kristin Stewart co-stars. R. On Amazon and Hulu. Reviewed on Stream on Demand here.

Shaun the Sheep (2015) comes from Aardman Animation, the folks behind Wallace and Gromit, and is rated PG for “rude humor” but is really a family friendly comedy with an innocent cheekiness and a love of silent movie humor. Baa! On Amazon and Hulu.

In the news: the free, ad-supported section of Hulu, which has shrunk in recent years as the company built up its subscription service, will be ending soon. At least on Hulu. Those ABC, NBC, and Fox shows they run eight days after the broadcast premiere for a limited time will move to a new streaming TV hub on Yahoo.

The Peanuts Movie (2015) brings Charlie Brown and the gang to the screen with the magic of 3D computer animation. G.

The documentary Hitchcock/Truffaut (2015) revisits the 1962 meeting between the Master of Suspense and the young French filmmaker that gave us the interview book of the same name, which became one of the most famous and influential film books of all time. PG-13.

Daniel Craig took on the mantle of a grittier, more rough-edge 007 in Casino Royale (2006) and gave the James Bond series a needed reboot. PG-13

The infamous giallo What Have You Done to Solange? (Italy, 1972) is considered one of the masterpieces of the genre. It’s a troubling one, in part because there is intelligence behind the exploitation. R. I explore some of the complications in an essay for Keyframe.

Based on a novels of MC Beaton, Agatha Raisin is a cheeky new British mystery series starring Ashley Jensen as a London PR professional turned amateur sleuth in yet another sleepy little British town plagued my murder. New episodes arrive each Monday through August.

Netflix, The Get Down