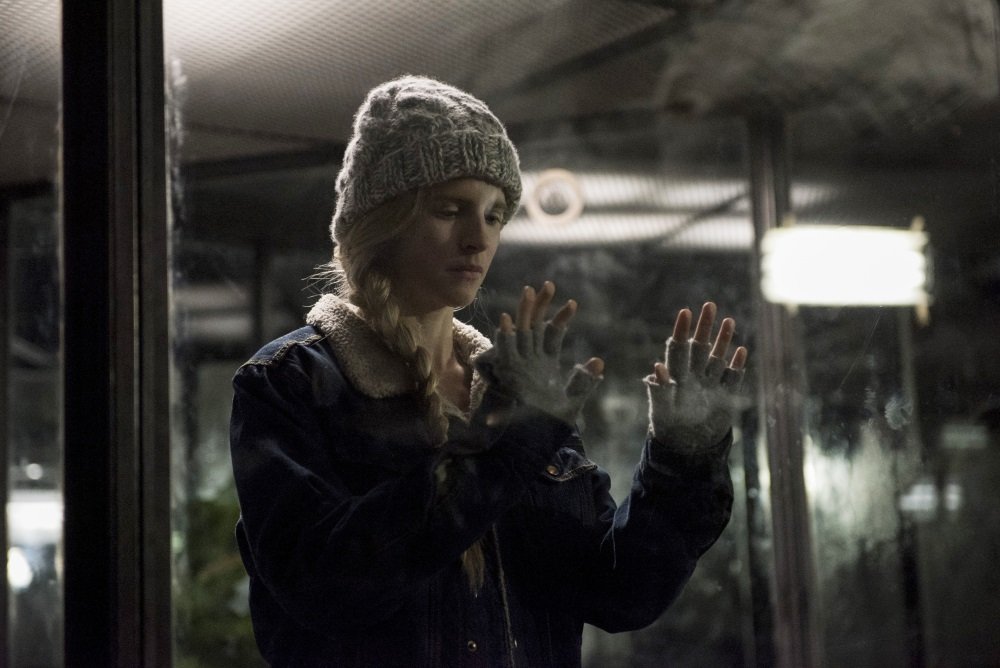 The OA, a Netflix original series created by director Zal Batmanglij and actress Brit Marling (who collaborated on the indie films The Sound of My Voice and The East), practically came out of nowhere. Though it was not a secret, Netflix didn’t publicize the film until this week, when it dropped a trailer with the enigmatic tag line “Trust the unknown.”

It’s a psychological mystery starring Marling as a missing blind woman who returns after seven years with her sight restored and refuses to discuss what happened.

“The show’s surprise arrival also mirrors the show’s narrative approach, which is dazzling in its insistence on avoiding straight lines and favoring hairpin turns,” writes Vulture TV critic Jen Chaney. “The whole experience is so absorbing that I now regret having made my top TV shows of 2016 list so early in December. The OA belongs, if not in my top ten, then certainly highly ranked among the honorable mentions.”

The bad guys take the lead in Suicide Squad, a darker, nastier DC anti-superhero movie with Will Smith, Margot Robbie, and Jared Leto as The Joker (PG-13).

Meryl Streep is the worst singer who ever lived in Florence Foster Jenkins, a comedy with a tender compassion based on a true story. Hugh Grant and Simon Hedberg co-star (PG-13).

Parker Sawyers is young Barack Obama and Tika Sumpter is Michelle Robinson in the romantic drama Southside With You (R).

Available before DVD are the coming of age drama Coming Through the Rye with Alex Wolff and Chris Cooper (PG-13) and the Korean zombie thriller Train to Busan (not rated, with subtitles).

Available same day as select theaters nationwide are the thriller A Kind Of Murder, based on the Patricia Highsmith novel “The Blunderer” and starring Patrick Wilson and Jessica Biel, and the modern border western The Hollow Point with Patrick Wilson and Ian McShane (both R).

Plus you can turn your screen into a virtual fireplace with the Yule Log. This and other holiday videos are free on participating cable systems and streaming services.

The Netflix original movie Barry is the other drama about young Barack Obama (Devon Terrell), this one about his formative experiences as a student at Columbia University in the early 1980s (not rated).

Also new: the indie dramedy Other People (2016) with Jesse Plemons and Molly Shannon (not rated) and the family Christmas comedy The Santa Clause (1994) with Tim Allen (PG).

From Hong Kong comes Phantom of the Theatre (2016), a handsome costume drama and ghost story set in 1930s Shanghai (not rated). Reviewed on Stream On Demand.

From Australia comes the dramas The Last Days of Chez Nous (1992) with Bruno Ganz and Kerry Fox (R) and Winter of Our Dreams (1981) with Judy Davis and Bryan Brown (not rated).

Streaming TV: the debut season of the alien occupation drama Colony, starring Josh Holloway (Lost) and Sarah Wayne Callies (The Walking Dead), is available before the second season begins on USA in January. 10 episodes. Reviewed on Stream On Demand here.

Also new: the American debuts of shows from Britain (horror comedy Crazyhead), France (historical drama Versailles and crime dramas No Second Chance and Cannabis), Spain (Call Me Francis, about the making of a Pope), and Norway (crime thriller Nobel).

For kids there is The Adventures of Puss in Boots: Season 4.

True stories: Morgan Spurlock directs Rats (2016), a survey of rat infestation around the world (not rated). Also new: The Seventh Fire (2016), which explores gangs and drugs on a remote reservation in Minnesota; Breaking a Monster (2016), about a New York rock band of 13-year-old boys; and Asperger’s Are Us (2016), a portrait of a comedy troupe of members that suffer from Asperger’s. Not rated.

The Man in the High Castle: Season 2 continues the alternate history thriller of America under Nazi occupation.

More streaming TV: Originally made for the Sundance Channel, The A Word: Season 1 explores family life with an autistic child.

True stories: The Iran Job (2013) follows an American basketball player in an Iranian league (not rated) and Finders Keepers (2015), about the legal battle over a severed leg purchased in an auction.

From France comes a couple of rarities from Jacques Rivette: Noroit (1976), a post-modern pirate movie with Geraldine Chaplin and Bernadette Lafont, and the offbeat fantasy Duelle (1976) with Juliet Berto and Bulle Ogier. Both with English subtitles (not rated).

The comedy Daddy’s Home (2015) stars Will Ferrell as a stepdad humiliated by his wife’s macho ex-husband (Mark Wahlberg) (PG-13). Amazon Prime and Hulu.

Hulu offers the first hour of the two-hour premiere of the fifth season of Nashville three weeks before it premieres on CMT in January. Seasons one through four are currently available to stream.

The Romanian drama Beyond the Hills (2012) won two awards at Cannes (with subtitles, not rated).

Malcolm McDowell, Brenda Blethyn, and Clemence Poesy star in the 2007 mini-series adaptation of War and Peace.