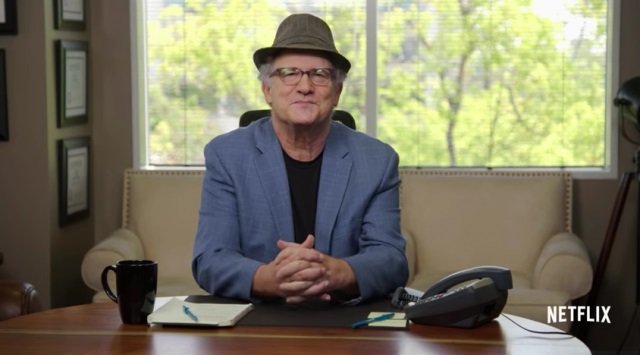 All seven features written and directed by Albert Brooks are now streaming on Netflix. We don’t know how long this contract lasts so you may want to start watching now. In chronological order, they are Real Life (1979, PG) with Charles Grodin, Modern Romance (1981, R) with Kathryn Harold, Lost in America (1985, R) with Julie Hagerty, Defending Your Life (1991, PG) with Meryl Streep, Mother (1996, PG-13) with Debbie Reynolds, The Muse (1999, PG-13) with Sharon Stone, and Looking for Comedy in the Muslim World (2006, PG-13).

Kung Fu Panda 3 (2016) promotes the roly-poly martial arts master Po (voice of Jack Black) to teacher and pits him against an evil warrior from the spirit realm. The DreamWorks Animation adventure offers bright colors, likable characters, and lessons in teamwork, and is fine for young kids. Also on Blu-ray and DVD. PG.

Also new: the comedy Whiskey Tango Foxtrot (2016) with Tina Fey as a combat reporter in Afghanistan (R) and Aleksandr Sokurov’s Francofonia (2015), a mix of historical drama, documentary, and essay film focused on the efforts to protect the Louvre from being looted by the Nazis in World War II (not rated, subtitled).

Available same day as select theaters nationwide is the comedy Buddymoon with David Giuntoli (star of the TV series Grimm) and comedian Flula Borg (not rated), plus the thriller Carnage Park with Ashley Bell and Pat Healy (not rated) and the indie drama A Light Beneath Their Feet with Taryn Manning and Madison Davenport (R).

The British crime drama Marcella: Season 1, starring Anna Friel as a London cop who returns to the high-pressure Murder Squad job after a 12-year break, debuts stateside on Netflix. 8 episodes.

Two more French language shows arrive on Netflix. A Very Secret Service: Season 1 is a comedy of spies, civil servants, and bureaucracy in the French Secret Service in the 1960s (12 episodes) and the mini-series Deep: Season 1 is modern cop drama about cop hiding a fatal illness as he tracks down a deadly synthetic drug on the streets of Paris (3 episodes).

The Shannara Chronicles: Season 1 presents MTV’s version of a fantasy epic based on the novels of Terry Brooks. It ain’t Lord of the Rings and it’s kind of cheesy but it does have elves, trolls, demons, a magic tree, and a quest. 10 episodes.

Thailand filmmaker Apichatpong Weerasethakul’s Cemetery of Splendor (2015) is a dreamy, lovely, contemplative film about the mysteries life set in a hospital where soldiers suffering from a sleep sickness are kept. Reviewed on Stream On Demand here.

Spike Lee is an executive producer on the indie drama Cronies (2015), a buddy film set over a hot summer day in St. Louis. It debuted at Sundance 2015. Not rated.

And here are a couple of cult items always fun to revisit: Batman: The Movie (1966) with Adam West and Burt Ward doing the tongue-in-cheek superhero spoof (PG) and Big Trouble in Little China (1986), John Carpenter’s tribute to China’s martial arts fantasies of the seventies and eighties (PG-13).

Now on both services: six “Star Trek” features (including the swashbuckling Star Trek II: The Wrath of Khan, 1982, and Star Trek VI: The Undiscovered Country, 1991, both PG), the Jack Ryan thriller The Hunt for Red October (1990, PG) and its two sequels, the horror classics Rosemary’s Baby (1968) and Don’t Look Now (1973) (both R), and the screwball con-man comedy The Brothers Bloom (2008) with Mark Ruffalo and Rachel Weisz (PG-13).

For kids: the complete series of the animated Gravity Falls and live action Dog with a Blog and Austin & Ally arrive from the Disney Channel.

Foreign affairs: The Loneliest Planet (2011) sends Hani Furstenberg and Gael García Bernal backpacking in the Caucasus Mountains in Europe (not rated) and from Japan comes Like Someone in Love (2012), directed by Iranian filmmaker Abbas Kiarostami (not rated). Both are subtitled.

Maze Runner: The Scorch Trials (2015), the second in the young adult sci-fi franchise, sends the lost boys out of the maze and into an even more dangerous world. PG-13.l

The documentary How to Let Go of the World (and Love All the Things Climate Can’t Change) contemplates life in a post-climate change world. Not rated.

The final episode of Game of Thrones: Season 6 is available, along with the finales of Silicon Valley: Season 3 and VEEP: Season 5.