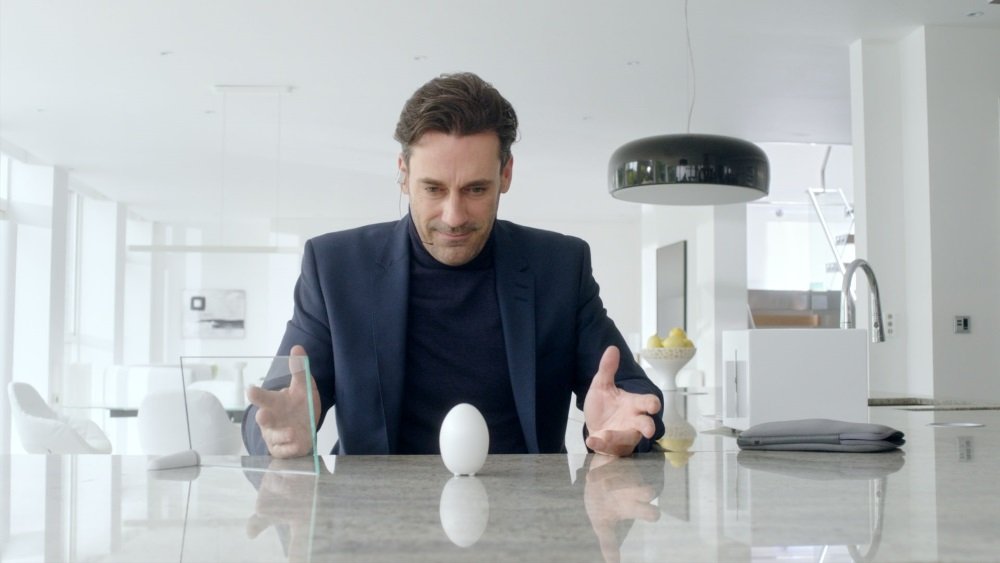 Don’t expect any holiday cheer from Black Mirror: White Christmas, a Christmas story from the dark British series about technology bringing out the worst human impulses. But if you are looking for a shot of cynicism to counter the seasonal spirit, this clever anthology of three stories with a science fiction twist should fit the bill. Jon Hamm and Rafe Spall star as the lonely souls swapping stories over a lonely white-out Christmas, but they are more than just storytellers. These are their stories and they don’t come out too well.

Jon Hamm, who lobbied series creator and writer Charlie Booker to be involved in the show, is perfectly cast. He’s a born salesman, a Don Draper without a soul. Made for British TV, it played on DirecTV before landing on Netflix with the rest of the series. It will either whet your appetite for the upcoming new season, created directly for Netflix this time, or it will sour you on the savage social satire of this audacious anthology series, a Twilight Zone for the plugged-in, tech-savvy culture of the 21st century. Not rated, adult language and material.

Pan is yet another take on the “Peter Pan” story, this one a lavish fantasy that imagines the origins of the boy who never grew up with Hugh Jackman as Blackbeard, Garrett Hedlund as Hook, Rooney Mara as Tiger Lily, and Levi Miller as Peter. It’s PG for “fantasy action violence.”

Pawn Sacrifice dramatizes the 1972 chess match between Bobby Fischer (Tobey Maguire) and Boris Spassky (Liev Schreiber) as Fischer battles both the Cold War and his own fragile mental state. PG-13 for language and sexuality.

Queen of Earth (2015) stars Elisabeth Moss as young woman in a spiral of depression who seeks solace in a retreat with her best friend (Katherine Waterston), but expectations and resentments drive them apart. They are not particularly likable and filmmaker Alex Ross Perry’s style is discomfortingly intimate, but it’s a riveting and raw chamber piece. Not rated, adult material. Reviewed on Stream On Demand here.

Horse Money (Cavalo Dinheiro, 2014), a drama about an aging immigrant in Portugal suffering from hallucinations from Portuguese filmmaker Pedro Costa, appeared on a lot of “Best of 2015” film lists this year. It did not play many theaters so this will be the first chance for many interested viewers to see it. In Portuguese with English subtitles, no rating.

Dawn of the Croods: Season 1, a new Netflix original animated series for kids, spins off the animated feature about a prehistoric family in the “croodaceous era.” A modern stone-age family they are not, but they are doing their best to evolve.

Also new: Pirates of the Caribbean: The Curse of the Black Pearl (2003), the first film in Disney’s pirate fantasy series starring Johnny Depp as Jack Sparrow (PG-13), the award-winning Italian drama The Dinner (I nostri ragazzi, 2014) about parents confronted with the brutal actions of their children (Italian with English subtitles, no rating), and the South Korean military thriller Northern Limit Line (2015) (Korean with English subtitles, no rating).

Selma, starring David Oyelowo as Dr. Martin Luther King, dramatizes the 1965 march through Alabama as both a benchmark moment in the Civil Rights struggle and a personal struggle by a national leader weighing the stakes of the movement with the individual costs borne by his followers. It was an Oscar nominee for Best Picture. PG-13. Reviewed on Stream On Demand here.

Mississippi Grind is a meandering road movie through the back waters of American culture starring Ryan Reynolds and Ben Mendelsohn as oddball buddies who meet over a hand of poker and gamble their way to a poker tournament. From filmmakers Anna Boden and Ryan Fleck, it plays like a seventies character drama. R.

Stop Making Sense (1984), the Talking Heads concert film directed by Jonathan Demme, is the same as it ever was more than 30 years after its debut: one of the definitive concert movies of all time. No rating.

House of Lies: Seasons 1 & 2 features the first 24 episodes of the continuing Showtime satire starring Don Cheadle as the proudly unscrupulous head of a management consultant team, a man who will do anything to land his client, from seduction to sedition, and Kristen Bell as his team leader, not yet as jaded and cynical but learning fast. It’s ostensibly a satire of American corporate culture, but mostly it’s just another frame around extreme characters who spend a season indulging in bad behavior with little remorse, sustained by an entertaining performance by Cheadle.

Una Noche (2012), an Independent Spirit Award nominee and a Tribeca Film Festival winner, is the drama of three Cuban teenagers who undertake the dangerous ocean crossing to the promised land of Miami. In Spanish with English subtitles, no rating.

Selma is also new on Hulu this week. Reviewed on Stream On Demand here.

The Longest Ride, this year’s romantic drama adapted from a Nicholas Sparks novel, finds love at the rodeo with Britt Robertson and Scott Eastwood. PG-13.

A Little Chaos (2014), directed by Alan Rickman (who also stars as King Louis XIV), is a historical romance from British with Kate Winslet and Matthias Schoenaerts. R.

Available Saturday, December 26 is The Water Diviner with Russell Crowe.

Boulevard features the last screen performance given by Robin Williams, who plays a closeted married man on journey to find himself. R.