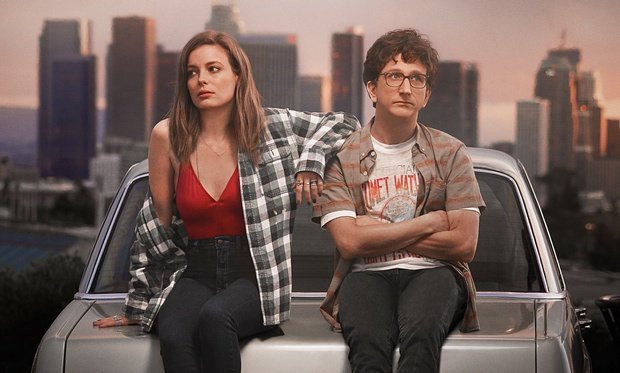 Debuting on Netflix today: Love, a new sitcom co-created by Judd Apatow, stars Gillian Jacobs as the self-destructive Mickey and Paul Rust (also a co-creator) as nerdy nice guy Gus, a pair of singles just out of dysfunctional relationships who become a two-person support group… and maybe something more. “Sweet and awkward, hopeful and cringe-inducing, it slows down the arc of a single romance like a frame-by-frame replay of a car crash and asks whether that collision is a disaster or a happy accident,” writes James Poniewozik for The New York Times.

Also debuting on Netflix is Cooked, from Oscar-winning documentary filmmaker Alex Gibney and food writer and historian Michael Pollan, a four-part series that explores the history and evolution of cooking and traditions from around the world.

The new Amazon original series The New Yorker Presents, also from Gibney’s Jigsaw Productions, this time in collaboration with The New Yorker, is a 30-minute magazine-style series, a mix of fiction and non-fiction segments from a variety of contributors. Much like the weekly magazine. And like the paper publication, this one rolls out with new issues each week. The first episode is free for anyone, the rest is exclusive to Amazon Prime members.

Steve Jobs, a dramatic portrait of the Apple co-founder as seen through the backstage preparation at three defining product launches, earned Academy Award nominations for stars Michael Fassbender and Kate Winslet. Danny Boyle directs from a screenplay by Aaron Sorkin and Seth Rogen co-stars as Steve Wozniak. The R-rating is for language. Also on Blu-ray and DVD. Reviewed on Stream On Demand here.

Johnny Depp is notorious Boston gangland killer Whitey Bulger in Black Mass, which dramatizes the scandalous events that protected a murderer during his reign of terror. Joel Edgerton, Benedict Cumberbatch, and Dakota Johnson co-star. R for violence, language, and drug use.

Also based on true stories are Trumbo, which earned Bryan Cranston an Oscar nomination playing the famous Hollywood screenwriter who broke the blacklist (R), and The 33, about the Chilean miners who were trapped for 69 days in a mine collapse (PG-13).

Theeb, a drama from Jordan, is one of the five Oscar nominees for Best Foreign Language Film and just picked up a BAFTA. No rating.

Atonement (2007) – Literary adaptation too often become waxworks in slavishly reverent and cinematically lifeless screen incarnations. Joe Wright’s version of Ian McEwan’s novel, directed from a screenplay by Christopher Hampton, bristles with life, lust, jealousy, betrayal, and tragedy with a small t, the kind reserved for us mere mortals. Wright drinks in the period and while reaching beyond the surface and into the unsettled emotional lives of the characters, notably the young lovers played by Keira Knightley and James McAvoy. The clack of typewriter strokes becomes the driving beat of both the story (for reasons that come clear in the final act) and distinctive score that earned the film’s sole Oscar (of seven nominations). Saoirse Ronan, up for an Oscar this year for Brooklyn, earned her first nomination for this film, co-starring with Romola Garai, and Vanessa Redgrave in the role of Briony, each playing the character at different moments in her life. R.

For kids is the animated Open Season (2006), with Martin Lawrence voicing a domesticated Grizzly bear dropped in the wilderness just before the start of hunting season and Ashton Kutcher as a disaster-prone mule deer. PG.

The Face of Love (2013) stars Annette Bening as a grieving widow and Ed Harris as a man who has a startling resemblance to her deceased husband. PG.13.

From Argentina comes XXY (2007), the drama of a teenager born with both male and female sexual organs who has lived as a girl but struggles to come to terms with her identity. Not rated.

An Idiot Abroad: Complete Series stars Karl Pilkington, sent by creators and co-hosts Ricky Gervais and Stephen Merchant to other countries as Britain’s worst goodwill ambassador. From France comes the original The Returned: Season 2, not to be confused with the American remake about the dead who come back to life.

Michael Fassbender is the Thane of Cawdor and Marion Cotillard his Lady Macbeth in the 2015 screen version of Macbeth from Australian director Justin Kurzel. Paddy Considine and David Thewlis co-star. R.

American Graffiti (1973) features Richard Dreyfuss, Ron Howard, Cindy Williams, Wolfman Jack, Harrison Ford in a small role, and a jukebox of hits from the 1950s and 1960s. Where were you in ’62? This nostalgia is rated PG.

The Adventures of Young Indiana Jones presents the 21 feature-length telefilms produced by George Lucas between 1994 and 2000 and featuring Sean Patrick Flanery as the teenage Indy in adventures from Europe to Asia to Africa to Hollywood and the Broadway stage.

More streaming TV: The Americans: Season 3 comes to Amazon Prime weeks before it’s available on disc. Also new are The Newsroom: Season 3 and Justified: Season 6, which are the respective final seasons of each series.

Based on the novel by Stephen King, 11.22.63 stars James Franco as a 21st century high school teacher who travels back in time to try and stop the assassination of President John F. Kennedy. Hulu rolls out the eight-episode mini-series at one chapter a week.

The new HBO original series Vinyl, produced by Martin Scorsese and Mick Jagger and set in the music industry of the 1970s, launched this week with a two-hour premiere directed by Scorsese. New episodes arrive every Sunday and HBO has already announced it has been picked up for a second season.

The Emmy-winning news satire program Last Week Tonight with John Oliver is back with new episodes.

Furious 7 (2015), the latest chapter in the hit franchise of fast cars and heists on wheels, drops the cars for airplanes and jumps them across skyscrapers. Features both original (PG-13) and extended cuts of the film. Reviewed on Stream On Demand here.

Available on Saturday, February 20 is Magic Mike XXL (2015) with Channing Tatum getting the band back together for one last show.

The Imitation Game (2014) was overshadowed in 2014 by The Theory of Everything, the other film about a British genius who faced adversity while doing revolutionary work that changed the world. This is the one with Benedict Cumberbatch as real life code-breaker Alan Turing, who cracked the Nazi enigma code and gave the Allies an advantage in World War II. His true story is devastating but the film takes so much dramatic license it gives a skewed perspective on the man and the science, and the portrayal of Turing as a social misfit with a manner that suggests Asperger’s syndrome is interesting but apparently more invention than interpretation. Keira Knightley co-stars with Matthew Goode and Mark Strong. PG-13.

The British film Pride (2014) dramatizes the true story of gay activists who help the miners during 1984 mineworkers strike. R.

Also new: the documentary A Murder in the Park (2014) and Martin Scorsese’s The Aviator (2004) with Leonardo DiCaprio as Howard Hughes.

The Viceroys is an Italian historical series, presented with subtitles.