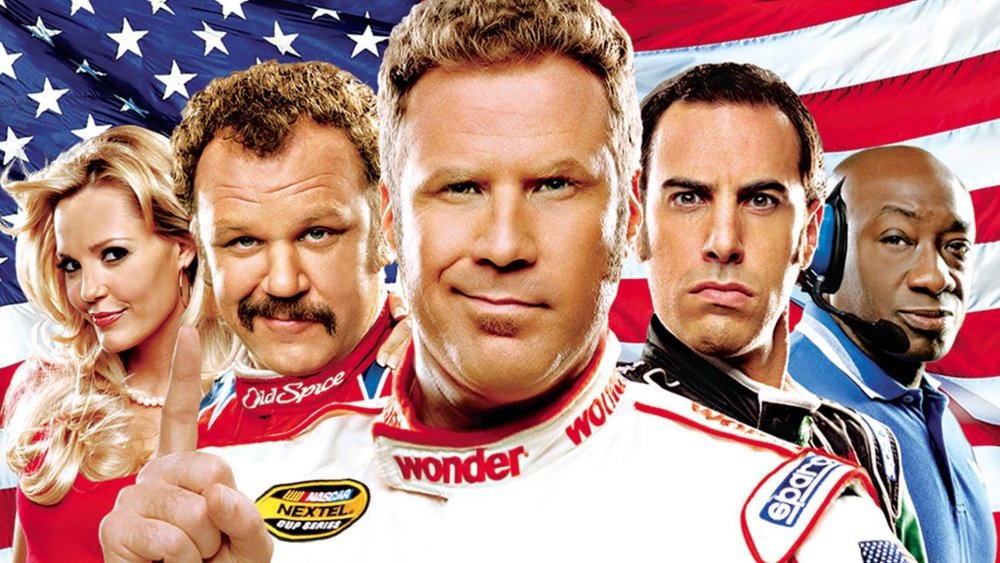 Talladega Nights: The Ballad of Ricky Bobby (2006) is one of the funniest films that Will Ferrell ever made. Set in the NASCAR culture, Ferrell is a race car driver with two first names who outraces his own intellect in a comedy that features neither a ballad nor a single night spent in Talladega. It does, however, feature John C. Reilly as the equally dim but exceedingly loyal best friend, Gary Cole as the absent father who periodically appears to gravely intone meaningless aphorisms with a beer in his hand, Leslie Bibb as his shameless golddigger of a wife, Sacha Baron Cohen as the flamboyantly gay and aggressively French champion who steals Ricky’s days of thunder, and Jane Lynch as Ferrell’s mom, who whips his bratty boys into shape with a smile. It’s a great ensemble and they get some of the funniest scenes, thanks to the generosity of Ferrell and his collaborator.

Oh, did I not mention that it’s directed and co-written by Adam McKay, or rather Oscar-nominated director and screenwriter Adam McKay thanks to The Big Short? You might not see Oscar ambition in this comedy but you can see where the sense of humor that made The Big Short so effective came from. It’s available on both Netflix and Amazon Prime.

Bridge of Spies, Steven Spielberg’s cold war drama starring Tom Hanks as the civilian lawyer sent to Berlin in 1962 to negotiate a prisoner swap with the Soviet Union for captured U-2 pilot Gary Powers, is nominated for six Academy Awards. PG-13. Reviewed on Stream On Demand here.

Carey Mulligan and Helena Bonham Carter star in Suffragette, about the often violent struggle for women’s voting rights in Britain in the early 20th century. PG-13. Reviewed on Stream On Demand here.

The election satire Our Brand is Crisis, inspired by the 2005 documentary of the same name, stars Sandra Bullock and Billy Bob Thornton as American campaign consultants in a Bolivian election. R. Reviewed on Stream On Demand here.

Politics also plays a big part in the TV journalism drama Truth with Cate Blanchett and Robert Redford as Mary Mapes and Dan Rather. There’s a bonus featurette with the rental. R.

Better Call Saul: Season 1, the “Breaking Bad” prequel, stars Bob Odenkirk as the man who will become the amoral Saul Goodman. The second season launches on AMC in mid-February. Reviewed in Stream On Demand here.

Experimenter (2015) stars Peter Sarsgaard as Stanley Milgram, the social psychologist whose experiments in human behavior shocked America, in Michael Almereyda’s inventive drama, a cinema experiment in its own right. PG-13. Reviewed on Stream On Demand here.

Also new: the controversial, sexually-explicit drama Love (2015) from the always-provocative Gaspar Noe, the dark comedy I Love You Phillip Morris (2009) with Jim Carrey and Ewan McGregor, and the SyFy mini-series Tin Man (2007), a steampunk reworking of The Wizard of Oz.

Spike Lee’s polarizing Chi-Raq (2015) is the first original feature produced by Amazon Studios, and now Amazon Prime subscribers can stream it for free. R. Reviewed on Stream On Demand here.

The BBC drama Poldark: Season 1 (2015) stars Aidan Turner (of “The Hobbit” and the original British “Being Human”) as a British soldier who returns from the American Revolutionary War to rebuild his life in 18th century Cornwall. With Downton Abbey closing house, this may be your next British period piece.

Grease: Live, which premiered earlier this week on Fox, is now available to watch not-so-live on Hulu.

The debut feature from the Coen Bros., Blood Simple (1985), is now on Hulu. Other new titles this month: the Oscar-winning Braveheart (1995) with Mel Gibson, An Officer and a Gentleman (1982) with Richard Gere and Debra Winger, The Madness of King George (1994) with Nigel Hawthorne, and the comedy Naked Gun: From The Files Of Police Squad (1988).

True Story (2015) dramatizes the true story of a disgraced journalist (played by Jonah Hill) who interviews a convicted killer (James Franco) who appropriated the journalist’s identity while in the run. R.

You can see the low-fi sci-fi indie I Origins (2014) with Michael Pitt and Brit Marling on HBO Now and HBO Go days before its cable debut.

Also new: the debut of the animated series Animals.: Season 1 and the return of the non-fiction show VICE: Season 4.

With Magic Mike XXL coming to HBO later this month, you can now catch up on the original Magic Mike (2012). Other new arrivals for February include the Oscar-winning films One Flew over the Cuckoo’s Nest (1975) with Jack Nicholson and Piano (1993) with Holly Hunter and Harvey Keitel.

Available on Saturday, February 6 is A Walk Among the Tombstones (2014).

Molly Moon and the Incredible Book of Hypnotism (2015) brings the best-selling kids book to the screen. PG.

A couple of horror films arrive this month: Awaken (2015) with Vinnie Jones and Daryl Hannah and Backcountry (2014) with Missy Peregrym and Eric Balfour versus a black bear.

The original Sherlock Holmes (1916), starring William Gillette—the man who was considered the definitive Sherlock Holmes of the stage—was thought lost to time until a print was found a couple of years ago at the Cinématèque Française. It has since been restored and is now streaming on Fandor.