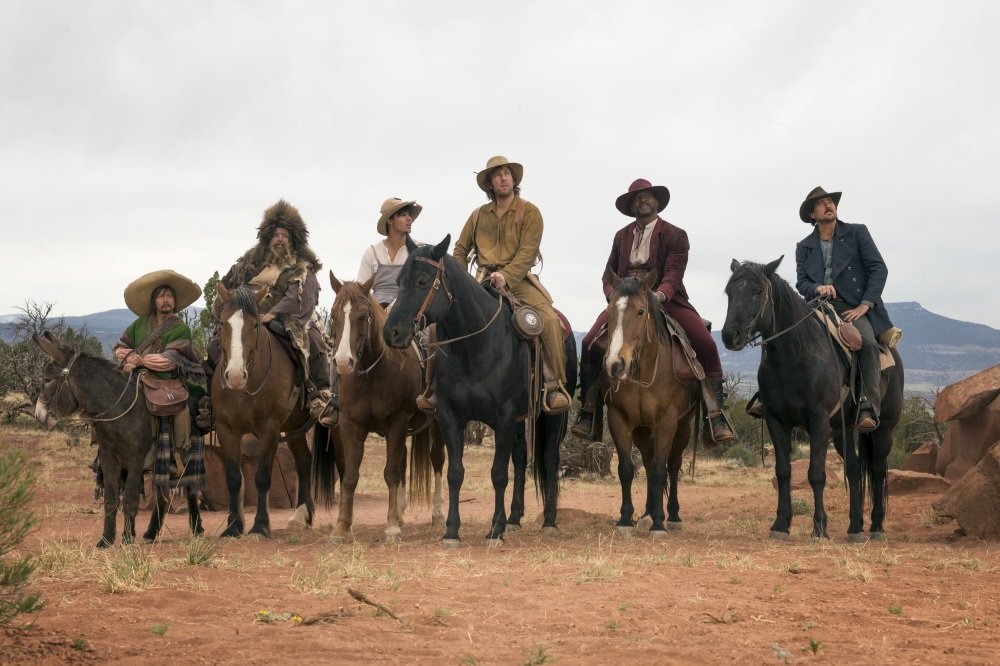 The western spoof The Ridiculous 6 (2015), not to be confused with a certain numerically-oriented Quentin Tarantino western, stars Adam Sandler in his first Netflix original film as a white man raised by Indians who goes on a quest with his half-brothers (Taylor Lautner, Rob Schneider, Luke Wilson, Jorge Garcia, and Terry Crews) to rescue their outlaw father.

It was kind of a big deal when Sandler signed to produce and star in four original Netflix features and this production, a riff on The Magnificent Seven with fart jokes, got a jolt of notoriety when Native American cast members walked off the set to protest the film’s portrayal of Native American characters and culture.

No rating and, as of yet, no reviews (Netflix didn’t make it available for critics in advance), but beware of potentially offensive adolescent humor and ethnic jokes.

Update: The reviews are in and it’s not good. I direct you to Sam Adams’ roundup at Indiewire’s Criticwire for a sampling.

It’s not my idea of funny, but if it’s yours, you can queue it up here.

Tired of how serious all the superhero movies have gotten? Take a break with Ant-Man, with Paul Rudd as an idealistic activist and cat burglar who is hand-picked by a retiring inventor (Michael Douglas, having a blast) to inherit his super shrinking suit. Rudd is likable and sincere and there’s plenty of banter and creative sight gags woven through the story of a scheming industrialist angling to sell the next generation of weapons to the bad guys. Evangeline Lilly and Corey Stoll co-star and a couple of characters from other Marvel movies have cameos. Also in 3D from some providers. PG-13 for “sci-fi action violence,” but rest assured no ants were harmed in the making of this movie. Reviewed on Stream On Demand here.

Minions gives the goofy little yellow henchmen of the Despicable Me movies their own feature. Also available in 3D from some providers. PG.

Phoenix, the powerful drama set in the ruins of Berlin after World War II, is available the same time it comes to Netflix (see below).

Also new: the R-rated horror comedy Scouts Guide to the Zombie Apocalypse and the PG-13 action thriller The Transporter Refueled.

Available same day as select theaters nationwide are the comedies Don Verdean with Sam Rockwell and Amy Ryan (PG-13) and American Hero with Stephen Dorff and Eddie Griffin (no rating) and the dramas The Girl in the Book with Emily VanCamp and Michael Nyqvist (no rating) and Dixieland with Riley Keough, Chris Zylka, and Faith Hill (no rating).

The German drama Phoenix (2014) is a powerful portrait of a disfigured Holocaust survivor (Nina Hoss) who returns to Berlin after World War II to find husband her (Ronald Zehrfeld), who may have betrayed her to the Nazis. Reviewed on Stream On Demand here. Filmmaker Christian Petzold previously collaborated with the two stars on the equally compelling Barbara (2013), set in East Germany before the fall of wall, which is also on Netflix. Both PG-13 and in German with English subtitles.

Teens and tweens: Vampire Academy (2014), based on the young adult fantasy novel, combines high school melodrama with supernatural thriller, but it didn’t strike a chord with audiences (PG-13). The supernatural also figures in One & Two (2015), about adolescent siblings who escape their prison of a home by teleportation (no rating).

Kid stuff: The Adventures of Puss in Boots: Season 2 offers more animated fun from the swashbuckling cat, and Phineas and Ferb: Season 4 features the final season of the animated Disney Channel show.

True stories: Dinosaur 13 (2014) chronicles the discovery of a Tyrannosaurus Rex skeleton in the Black Hills of South Dakota, the largest, most complete ever found, and the ten-year legal battle over ownership, and Beltracchi: The Art of Forgery (2014) profiles the artist responsible for the biggest art forgery scandal of the 20th century.

With Carol receiving plaudits and leading awards groups and Best of the Year lists, why not revisit the first collaboration between director Todd Haynes and actress Cate Blanchett in I’m Not There. (2007), a freewheeling portrait of the lives (real and imagined) of Bob Dylan. R. Reviewed on Stream On Demand here.

Michael Buble’s Christmas in Hollywood (2015), his holiday special featuring Celine Dion, Sharon Jones and the Dap-Kings, and Blake Shelton, is now available on Hulu for subscribers and non-subscribers both.

Get Hard, a prison comedy with Will Ferrell and Kevin Hart (available on R-rated and extended unrated versions), and the vampire mockumentary What We Do in the Shadows from New Zealand (R) are new this week.

U2: iNNOCENCE + eXPERIENCE Live in Paris, originally scheduled for last month and delayed after the Paris attacks, is now available.

The season finale of The Leftovers :  Season 2 ran this week, which means the entire series is available for subscribers to view at your leisure.

New to Showtime this week: the thrillers Killing Season with Robert De Niro and John Travolta and Stolen with Nicolas Cage.