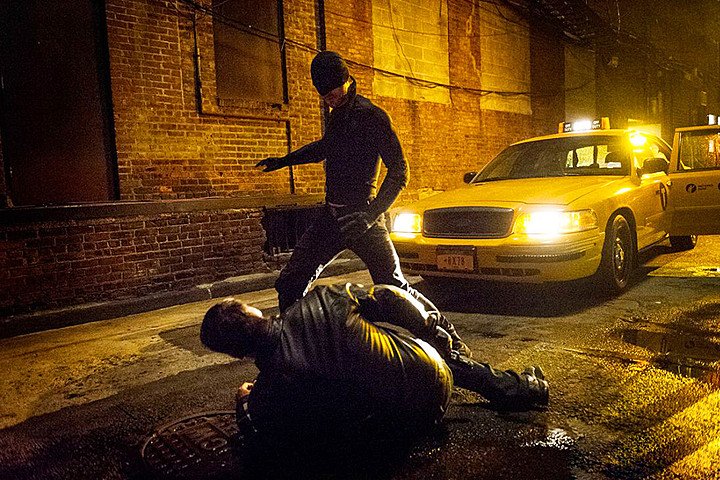 “Daredevil” (or, as it’s been branded across the web, “Marvel’s Daredevil”) launches today. This superhero is the costumed alter ego of Matt Murdoch, a blind lawyer from the slums of Hell’s Kitchen with Batman skills and elevated senses, and the show is closer to the urban grittiness of the Dark Knight movies than the splashy Marvel movies. Charlie Cox and Vincent D’Onofrio star. More at Stream On Demand here.

All 13 episodes are let loose at once so expect plenty of binge-watching in the Netflix quadrant of the Marvel Comics Universe this weekend. More at Stream On Demand here, or simply queue it up here.

“A Most Violent Year” should have been an Oscar contender. Oscar Isaac, as an ambitious businessman determined to succeed in the crime-ridden culture of early 1980s New York City without mob ties, and Jessica Chastain, as his fierce, fearless wife, are superb and filmmaker J.C. Chandor (who made “Margin Call”) expertly takes us through gray area between the culture of official corruption and the criminal underworld (organized and unorganized crime both). It is a violent world (and a shadowy one) but Chandor doesn’t let the R-rated film slip into gangster spectacle. Also on DVD, Blu-ray, and VOD, and at Redbox.

Available on Cable on Demand same day as theaters is the romantic comedy “5 to 7” with Anton Yelchin and Bérénice Marlohe (rated R) and the young adult drama “The Sisterhood of Night” with Georgie Henley (of “The Chronicles of Narnia” films) (PG-13).

“Halt and Catch Fire: Season 1,” set in the early days of the home computer revolution, follows a small (fictional) Texas tech company with visionary plans for a portable computer and an original operating system. The AMC drama could be the bookend to HBO’s tech startup comedy “Silicon Valley.” Lee Pace (of “The Hobbit” films) stars as the enigmatic dreamer with a pirate soul, with Scoot McNairy and Mackenzie Davis. The second series begins on AMC this summer.

Also new: the possession thriller “The Quiet Ones” and the vampires-versus-werewolves action thriller “Underworld” with Kate Beckinsale as a vampire assassin in black leather.

“Louie: Season 4” is now available to stream as the fifth season of the smart, self-aware sitcom begins on FX.

The 1994 “Little Women” (1994) has all but displaced the earlier screen versions Louisa May Alcott’s novel as the most faithful and mature adaptation. It’s directed Gillian Armstrong and stars Winona Ryder, Claire Danes, Christian Bale, and Susan Sarandon.

Hulu Plus continues to make moves into the realm of TV exclusives. Starting this week is has subscription streaming rights to “CSI: Crime Scene Investigation“, which it shares with CBS All Access, the network’s own service (you can still get video-on-demand episodes through Amazon, iTunes, and Vudu at $2 apiece). That’s over 300 episodes of the flagship “CS”I series, which joins the ten season of “CSI: Miami” (did it really run that long?) that is already available on Hulu Plus (which it shares with Netflix).

Also new is the first season of the TNT end-of-the-world drama “The Last Ship,” the surprise cable success from last summer. A second season is set to begin in the Fall on TNT.