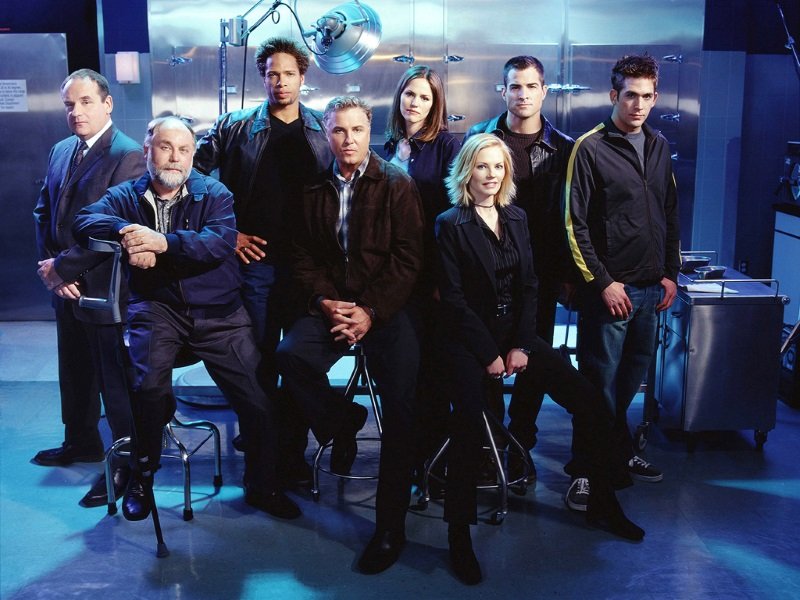 Hulu Plus continues to make moves into the realm of TV exclusives. It now has subscription streaming rights to “CSI: Crime Scene Investigation“, which it shares with CBS All Access, the network’s own service (Amazon, iTunes, and Vudu offer VOD episodes at $2 apiece). That’s over 300 episodes of the flagship “CSI” series, from William Petersen’s reign as Gil Grissom to the team under Ted Danson’s D.B Russell, solving crimes in the darkest forensics lab ever created. Hulu’s “CSI” page is here.

Hulu Plus also has all ten season of “CSI: Miami” (which it shares with Netflix), the sunny crime fighters-in-paradise alternative to the nocturnal world of casinos and bars and neon lighting of the Las Vegas original. Which brings up the question: they really had 10 seasons? Wow. David Caruso’s retirement plan is set. “CSI Miami” is here.

“Big Eyes” is Tim Burton’s second foray into strange but true stories of American termite art culture. Amy Adams is Margaret Keane, who painted hundreds of portraits of sad-eyed waifs, and Christoph Waltz is Walter Keane, the born salesman who promoted them into a pop culture phenomenon while taking credit for painting them. Burton loves his oddballs and underdogs, but he also finds the human drama under the kitsch and the comedy. Adams won a Golden Globe for her performance. It’s PG-13 for language. More at Stream on Demand here.

The Tribeca Film Festival is underway in New York City but they are sharing three of their presentations with the entire country through Cable On Demand: “Far From Men,” starring Viggo Mortensen as a French-born teacher in a small Algerian village in the 1950s; the British crime thriller “Hyena” starring Stephen Graham (he played Al Capone in “Boardwalk Empire”); and documentary “Misery Loves Comedy,” which asks dozens of comedians the question, Do you have to be miserable to funny?

Available the same day as theaters is the drama “Alex of Venice” with Mary Elizabeth Winstead (rated R), and the thriller “Beyond the Reach” with Michael Douglas in the Mojave Desert (rated R).

One of the best and most original horror films in years, “The Babadook” raises goosebumps with old-fashioned scares and relatable characters: a single mother (Essie Kent) still in mourning for her dead husband and struggling to cope with a problem child who arms himself an imaginary monster that may in fact be real. The title is an anagram for “a bad book,” which is a pop-up children’s storybook with a terrifying creature that apparently jumps out of the pages and into the shadows, from where it terrorizes both mother (now a sleepless wreck) and son. It’s both powerful metaphor and a genuinely creepy horror movie about the terrors that just might really be hiding under your bed. More at Stream on Demand here.

“Hot Fuzz,” the 2007 comedy from the creators of “Shaun of the Dead,” is a parody of American buddy cop / action movies dropped into twisted version of the cozy little BBC murder mysteries set in picaresque rural villages. Fans of both genres should enjoy this cheeky comedy. I salute the film at Stream on Demand here.

“They Came Together” is a more recent movie parody, this one with Amy Poehler and Paul Rudd as a couple who meet cute and romp through every romantic comedy cliché along their courtship. Check out the reviews here. Cue it up, and it’s also available on Amazon Instant Prime.

For those seeking the cinematically challenging, there’s Jean-Luc Godard’s “Goodbye to Language,” which is part essay, part formal experiment, part dialectic debate. If you want a story, this isn’t a movie for you, and Godard shot the film in 3D, experimenting with the possibilities of the technology in ways no other filmmaker has before. Netflix only has the 2D “flat” version, which merge the two images. It doesn’t completely communicate the 3D effects, but in places it at least suggests what Godard is doing. Queue it up.

“Still Life,” starring Eddie Marsen as a Councilman in London whose job—to arrange for the burials of folks who have no one else—becomes his entire life, came out briefly this year in the U.S. Godfrey Cheshire describes it as “pretty much an exact cinematic equivalent” of the Beatles’ “Eleanor Rigby” at RogerEbert.com. It’s an Amazon Prime Member Exclusive (which basically means not on Netflix). You can peruse a few reviews here if you’re interested. Queue it up.

“Ping Pong Summer” is a coming-of-age comedy starring Marcello Conte as a thirteen-year-old kid white kid obsessed with ping pong and hip-hop in 1985 Maryland during another awkward summer vacation. Susan Sarandon plays the eccentric recluse of a neighbor who offers a little advice and John Hannah, Lea Thompson, Amy Sedaris, Robert Longstreet, and Judah Friedlander co-star. Queue it up.