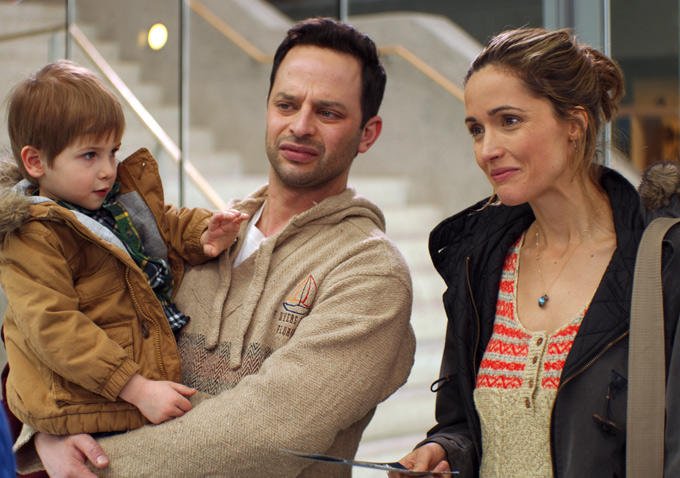 “Adult Beginners” stars Nick Kroll and Rose Byrne as grown siblings reunited when his start-up goes belly-up and he moves in with his married sister, where he becomes the live-in nanny for her three-year-old son. The comedy is on Cable On Demand and iTunes same day as theaters.

John Travolta is a veteran thief and art forger who wants to pull one last job “The Forger,” a comic caper film and a family affair co-starring Christopher Plummer as his father and Tye Sheridan as his son, who team up as his heist crew. It debuts on Cable On Demand same day as theaters.

“A Girl Walks Home Alone at Night” isn’t as creepy as “The Babadook” (which arrived on Netflix last week) but it is unique: a vampire movie from an Iranian-born, American-based filmmaker that stirs American movie references into a stylized Iranian film noir. The vampire (Sheila Vand) wears a chador and rides a skateboard through her ghost town of a city (night-shrouded California locations subbing for Iran) and her boyfriend is part James Dean rebel, part street thug desperate to escape the life. It may not be scary but it sure is stylish and fascinating. More at Stream On Demand here. Queue it up here.

Here are a couple of additional foreign films debuting this week. “Living is Easy with Eyes Closed” is a Spanish road movie about an English teacher (Javier Cámara) who, in 1966, heads off to Almeria with the hopes of meeting John Lennon and picks up two hitchhiking runaways along the way (Queue it up!) and “No Tears for the Dead” is a South Korean crime thriller about a Korean hitman (Jang Don-gun), raised in the U.S. by a mafia family, who returns home to face the mother of a child he accidentally killed in the course of a mission (Queue it up!).

With the new “Avengers” film coming to theaters next week, here’s a timely addition of superhero TV: three animated series from Cartoon Network featuring the DC super team. “Justice League,” which debuted in 2000, offers a more mature take on the all-star superhero team that counts Superman, Batman and Wonder Woman as charter members. This is no happy-go-lucky group of seventies-era “Super Friends” saving the world with a smile and a chummy sense of togetherness. Choppy relationships, clashing personalities (the grim Green Lantern, lighthearted jester The Flash, grim, haunted Martian Manhunter and, of course, Batman, who explains himself with the line: “I’m not really a people person”), and lots of suspicion make these teammates an often contentious and always interesting group. Each adventure spans multiple episodes, giving the series a scope larger than most such shows.

The series added new charter members when it morphed into “Justice League Unlimited” in 2004, among them Green Arrow, Supergirl, and Black Canary, though this incarnation backed off the multi-episode stories for more self-contained episodes. “Young Justice” took on the sidekicks to the Justice League heroes—Robin, Aqualad, Kid Flash, Red Arrow—and other young superheroes as a junior team in training. All of them are well-produced shows.

Not quite so super but certainly an animated team with history is “Scooby-Doo! Mystery Incorporated,” the updated revival of the classic Saturday Morning series. Queue it up!

“Noah” isn’t your usual Biblical epic. Directed by Darren Aronofsky and starring Russell Crowe as God’s moral man in a world corrupted and despoiled by the offspring of Cain, it is an earthy and mystical film. While Aronofsky was criticized for taking liberties with the source, he draws from additional Biblical references and Jewish holy texts to fill out the story (which is a mere 62 verses in the Bible) and shows respect for the faith of the source while taking a creative approach to dramatizing the story and the Old Testament world. It’s now on Netflix and Amazon Prime Instant. More at Stream on Demand here.

From Britain comes “Son of a Gun,” a violent crime thriller starring Ewan McGregor and Brenton Thwaites as prison escapees who team up for a bank robbery. It’s a Prime Member Exclusive.

Hulu debuted a new original series: “Resident Advisors: Season 1,” a comedy about a group of college dorm counsellors dealing with the antics of their underclassman charges. It stars Jamie Chung and features a guest appearance by Elizabeth Banks, who is one of the producers. You can see the first two episodes without a Hulu Plus subscription. Watch it here.

Also new is “Deadbeat: Season 2,” with Tyler Labine as a guy who sees dead people, and helps them move on to a better afterlife. The complete first season and the first episode of the second season is free on Hulu, the rest require Hulu Plus. See it here.