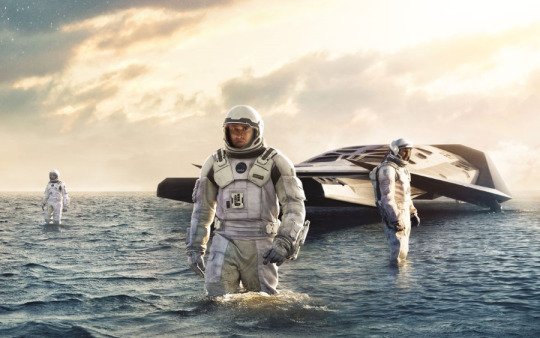 “Interstellar,” Christopher Nolan’s follow-up to his hugely successful “Dark Knight” trilogy and cerebral caper film “Inception,” is as visually and conceptually ambitious a science fiction film as you’ll see on this kind of scale. The family drama at the center, with Matthew McConaughey as the single dad who leads a deep space mission and Jessica Chastain as the daughter who holds a grudge for decades, isn’t as compelling or as convincing as Nolan’s visualization of amazing alien worlds, black holes, and quantum physics (Neil deGrasse Tyson gave the film top marks for its science). Yes, love conquers physics but if you like your science fiction brainy and visionary, it’s worth your time (which is close of three hours). Co-stars Anne Hathaway, Wes Bentley, Michael Caine, and the coolest robot I’ve seen in ages. PG-13.

“The Imitation Game” was overshadowed in Oscar season by “The Theory of Everything” but Benedict Cumberbatch is superb (if a little on heavy on the Asperger’s syndrome behavior) as real life code-breaker Alan Turing, who cracked the Nazi enigma code. His true story is devastating but the film takes so much dramatic license it gives a skewed perspective on the man and the science. Keira Knightley co-stars with Matthew Goode and Mark Strong. PG-13 for mature themes.

Also new: Morgan Freeman narrates the G-rated IMAX documentary “Island of Lemurs: Madagascar” and Chris Evans and Michelle Monaghan star in the rom-com “Playing It Cool,” which comes to Cable On Demand before theaters.

A new month brings a fresh batch of titles to the line-up. Well, perhaps fresh isn’t the right term for a line-up that includes three sequels to “Leprechaun 4: In Space” and the Crocodile Hunter movie “Collision Course,” but there’s also the new indie comedy “Life Partners” with Leighton Meester and Gillian Jacobs as BFFs and the 2001 satire “Buffalo Soldiers” with Joaquin Phoenix as a black market hustler on a U.S. military base in 1980s Germany.

For adrenaline junkies, there is the modern martial arts freak-out “The Man with the Iron Fists,” directed by and starring the Wu Tang Clan’s RZA with Russell Crow and Lucy Liu, and the vampires-versus-werewolves supernatural action of “Underworld,” with Kate Beckinsale as a fanged assassin kicking butt in black leather.

For the kids, there’s the 2006 animated comedy “Barnyard” and more episodes of the Netflix original animated “Madagascar” spinoff “All Hail King Julien.”

If you missed it on PBS, you can now see the entire documentary mini-series “The Roosevelts,” the latest American history epic from Ken Burns, as part of your Amazon Prime subscription. It’s his latest non-fiction magnum opus, by which I mean he devoted an epic length—14 hours in all—to this project, the same kind of scope he saves for major projects: “The Civil War,” “Baseball,” “Jazz,” “The War.” That’s because this isn’t just biography. Burns uses the lives and accomplishments of Theodore, Franklin, and Eleanor Roosevelt to explore the political and social history of America from the turn of the century to World War II, and he focuses on the evolution that these privileged people underwent to become champions of working folks over the moneyed interests of their class. Paul Giamatti voices Theodore Roosevelt, Edward Herrmann is Franklin (the same role he played decades ago on TV), Meryl Streep reads for Eleanor, and Peter Coyote narrates.

Amazon Prime also has a handful of exclusive movies this month. “The Better Angels,” an atmospheric drama about the childhood of Abraham Lincoln, stars Jason Clarke, Diane Kruger, and Brit Marling. Kevin Kline inherits Maggie Smith along with a Paris apartment in the comedy “My Old Lady,” and Kevin Smith directs the tall tale of a horror film “Tusk,” a film with a different kind of teeth.

And because it’s one of the most unlikely holiday greats of all time, it’s always good to know that you can stream “Groundhog Day” when you need a hearty laugh that makes you feel good about the world.

Hulu Plus just picked up the exclusive subscription streaming rights to all 12 episodes of the new hit “Empire,” the only new series this season to attract more viewers with each episode. You can still see them through the Fox website and Comcast’s On Demand service (for a while anyway), and via pay-per-view through Amazon, iTunes, and Vudu (at $2 an episode), but Hulu Plus plans to build their subscription empire on this show going forward.