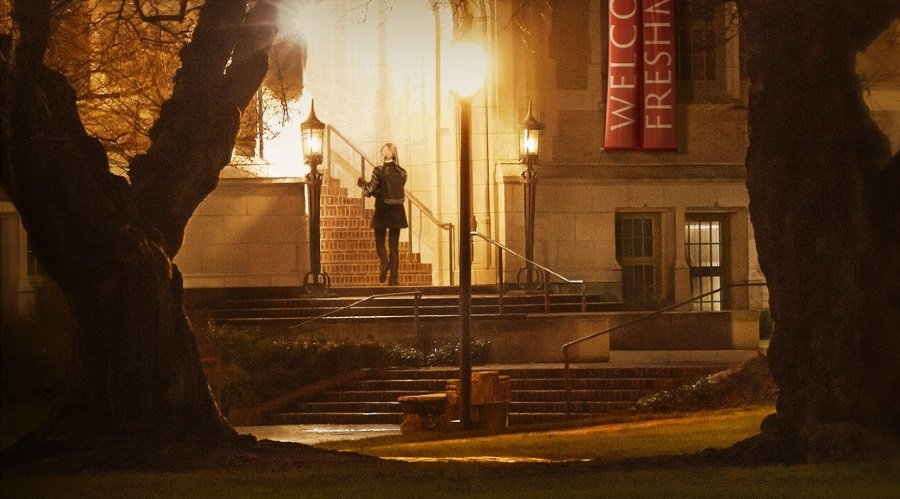 Hot Pursuit, an odd couple road comedy with Reese Witherspoon as a by-the-book cop trying to protect newly widowed drug dealer’s wife Sofía Vergara from both cops and crooks. It’s a pratfall action comedy that fails to catch any of the fire generated by Sandra Bullock and Melissa McCarthy in the raunchy 2013 hit The Heat. This is PG-13 for some sexual and drug references. Also on Blu-ray and DVD

In The Hunting Ground, documentary filmmaker Kirby Dick delves into rape on college campuses and the resistance from campus officials to investigate and prosecute these cases. There’s no explicit imagery but the PG-13 film features graphic descriptions of sexual assaults.

Also new: the horror film Unfriended (rated R) and the G-rated nature documentary Enchanted Kingdom, currently in select theaters and available in 3D from some systems.

Available same day as select theaters nationwide is Cop Car, a thriller about two boys who take an apparently abandoned police cruiser on a joy ride and the corrupt sheriff (Kevin Bacon) desperate to recover the car (and the dead body in the trunk), and Final Girl, a horror film with Abigail Breslin turning the tables on a group of young male serial killers. Both are rated R.

Also new: the dramedy People, Places, Things with Jemaine Clement as a single father reentering in the dating culture (R) and the French-language psychological thriller Tom at the Farm from Quebec (no rating, for mature audiences).

Marion Cotillard earned an Oscar nomination for her raw performance as a woman struggling to save her job in Two Days, One Night (2014), directed by the Dardennes Brothers, Belgium’s realist poets of working class life and down-and-out survivors. It’s in French with subtitles and is PG-13 for mature themes, but there’s nothing explicit here beyond hard times. More on Stream On Demand or just queue it up!

Amy Adams goes to Ireland in the romantic comedy Leap Year (2010) (queue it up) and roommates Lauren Miller and Ari Graynor bond when they become partners in a phone sex service in the comedy For a Good Time, Call… (2012). Queue it up.

It’s Jurassic Park meets Cars meets Transformers! The new Netflix original animated series Dinotrux, produced by DreamWorks and based on the storybooks by Chris Gall, combines two primal obsessions of little boys: modern trucks and prehistoric dinosaurs. They know who their audience is. Queue it up!

Doctor Who: Season 8 introduces Peter Capaldi as the new Doctor, which shakes up the flirtatious bond between the previous, much younger Doctor and his young female companion. He’s the oldest to take the reins of the TARDIS in almost fifty years and brings a flinty quality to his excitable energy. It’s also on Hulu. More on Stream On Demand or queue it up.

Pilot Season is back and you don’t need to be a Prime subscriber to watch the pilot episodes for two Amazon Prime hopefuls. Now available to view for free: Sneaky Pete, created by David Shore (“House, M.D.”) and starring Giovanni Ribisi as a con man who ducks a debt by creating a new identity as a bail bondsman, and Casanova from Jean-Pierre Jeunet (“Amelie”), which reimagines the legendary lover (played by Diego Luna) as a royal spy. If the response is good enough, these try-outs will get a series commitment from Amazon. More about the shows on Stream On Demand or add the shows to your watchlist: Sneaky Pete here and Casanova here.

Gett: The Trial of Viviane Amsalem, an Israeli courtroom drama about a woman in a battle with wills with her husband who refuses to grant her a divorce (a “gett”) from their loveless marriage, confronts the inequities of Israeli law for women. It won the Israeli Film Academy Award for Best Film. Add to watchlist.

Amazon Prime adds to its “Masterpiece” collection with the first two seasons of Endeavour, the Inspector Morse prequel starring Shaun Evans as the young Detective Constable in the very corrupt police culture of Oxford in the sixties. Along with Evans as Morse, brilliant and dedicated yet soft-spoken and unsure of his commitment to the job in such a culture, Roger Allam stands out as the commanding DI who recognizes and encourages Morse’s intelligence, talent, and honesty. Add to watchlist: the pilot telefilm and the complete first two series.

You’re the Worst: Season 1 starring Chris Geere and Aya Cash as self-destructive singles who, despite themselves, fall for each other, arrives a month before the second season of the sitcom debuts on FX. Watch it here.

Doctor Who: Season 8 (mentioned above) also arrives on Hulu this week. Watch it here.

The Hobbit: The Battle of the Five Armies, the third and final film in Peter Jackson’s epic adaptation of J.R.R. Tolkien’s modest adventure, brings the story to an action-packed close with a grand sense of scale and sweep at the expense of the personal story of Bilbo (Martin Freeman). More at Stream On Demand here.