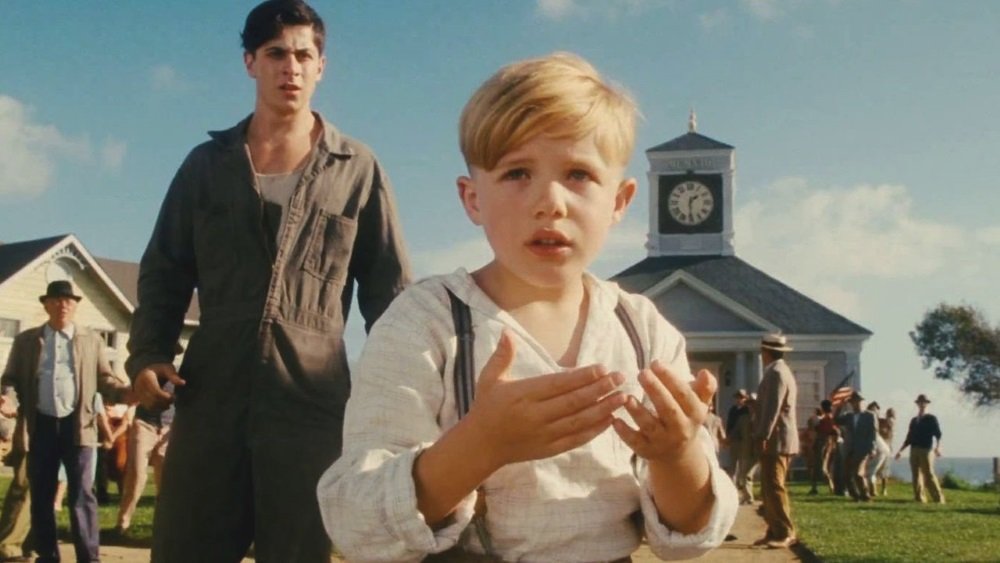 Little Boy, a family drama about a spunky little kid who turns to prayer to prove his faith while his father fights in World War II, comes from the producers of The Bible. The heart is in the right place but the message is confused and misguided and its origins (it’s produced in Mexico with an English language cast) show in its odd, ersatz nostalgia. Emily Watson and Tom Wilkinson star. The PG-13 rating is for scenes of war violence. Also on Blu-ray and DVD and available through Cable On Demand, Amazon Instant Video, Vudu, Cinema Now, Microsoft, and DirecTV.

The documentary Lambert & Stamp profiles the duo who helped transform a British bar band into the rock phenomenon The Who. Rated R for language, drug use, and brief nudity. Also on Blu-ray and DVD and available through Cable On Demand, Amazon Instant Video, Vudu, Cinema Now, Microsoft, CinemaNow, and DirecTV. Reviewed on Stream on Demand here.

Available on Cable On Demand same day as select theaters nationwide is She’s Funny That Way, a modern screwball comedy with Owen Wilson and Jennifer Aniston and Peter Bogdanovich’s first theatrical feature in over a decade (rated R), and the documentary Being Evel on the legendary motorcycle daredevil Evel Knievel (no rating).

Lord of War (2005), starring Nicolas Cage as a Russian-American entrepreneur who transforms the illegal gun trade into the modern business of international arms trafficking, combines a satirical approach with a sense of outrage to explore a serious issue. R for violence, drug use, language, and sexual content. Read the review on Stream On Demand here, or just queue it up.

Steve Carell is Seeking a Friend for the End of the World (2012) during the last days of life on Earth and Keira Knightly signs on for his final road trip to track down his high school sweetheart in this low-key comedy. Rated R for language and brief violence. Queue it up!

Pariah (2011), starring Adepero Oduye stars as 17-year-old African American woman coming to terms with her identity as a lesbian in a religious family intolerant of difference, won at Sundance and the Independent Spirit Awards and writer / director Dee Rees went on to make Bessie for HBO. Rated R for sexual content and language. Queue it up.

Strange Empire: Season 1 is a Canadian western about women who band together for survival in a frontier town in 19th century Alberta. Queue it up.

The documentary Misery Loves Comedy posits the question “Do you have to be miserable to be funny?” to dozens of comedians, who joke their way through serious answers. It’s not rated but features adult language and discussion of drugs. Read more at Stream On Demand here or just add to watchlist.

If I Stay (2014), based on the young adult novel Gayle Forman, stars Chloë Grace Moretz as high school girl caught between life and death after a car accident. PG-13. Add to watchlist.

Robert Rodriguez celebrates and encourages the fantasy lives of kids with his whimsical adventure fantasy The Adventures of Sharkboy and Lavagirl (2005), based on the stories of his 7-year-old son and starring young Taylor Lautner. The bright, silly fantasy is PG for rude humor. Add to watchlist.

Eddie Redmayne won the Oscar this year for his portrayal of physicist Stephen Hawking in The Theory of Everything, also now available to subscribers.