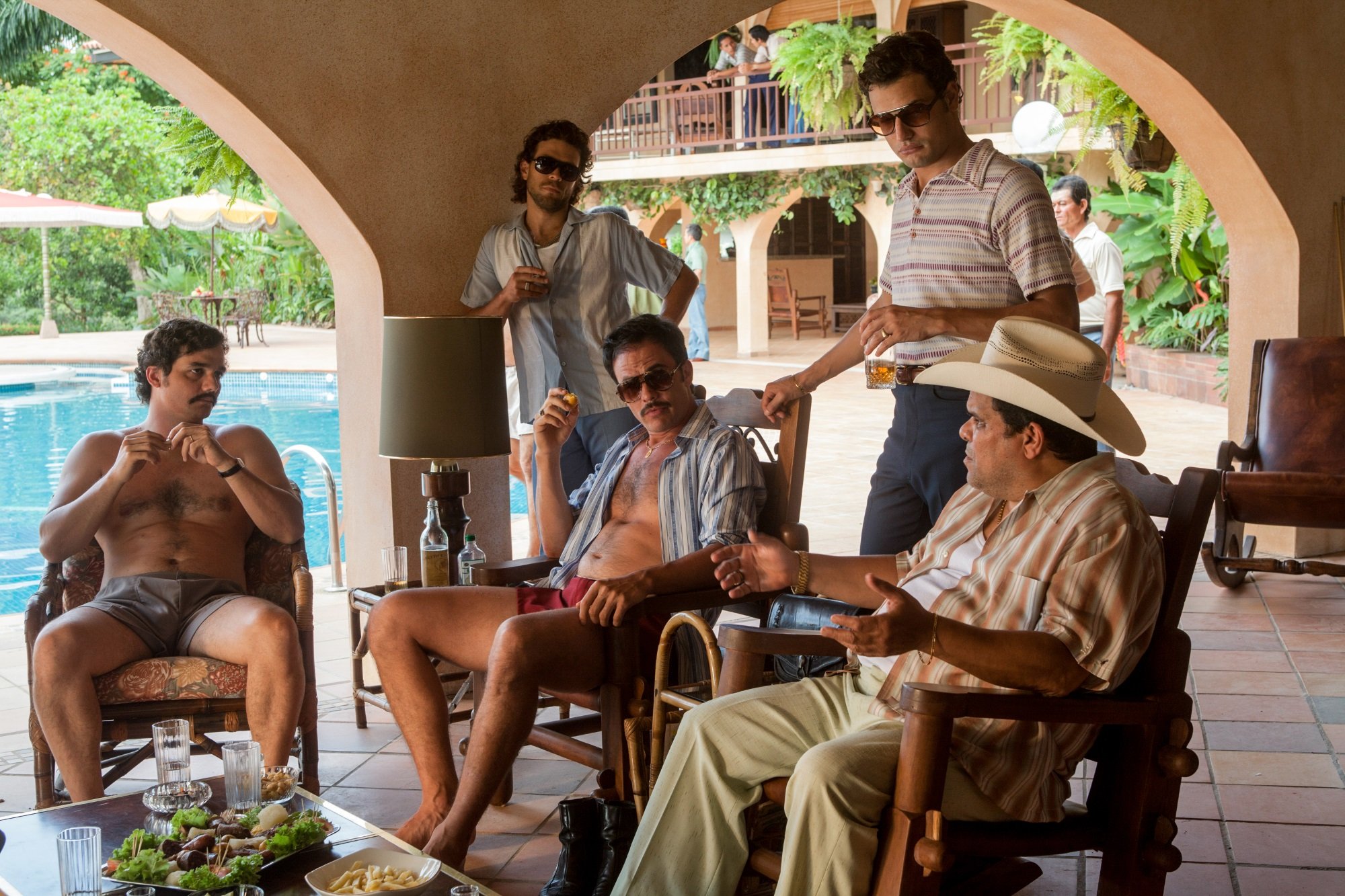 I didn’t have the opportunity to see it in advance so here are a couple of early reviews:

Neil Ganzingler at The New York Times: “It’s built on sharp writing and equally sharp acting, as any good series needs to be. At the center of it is a prize-worthy performance by the Brazilian actor Wagner Moura (who starred in Mr. Padilha’s Elite Squad films) as Escobar.”

Mary McNamara at Los Angeles Times: “a gangster tale super-sized by sheer volume (So much coke! So much money! So much violence!), sprinkled with ideology (communism, militarism, liberation theology) and loosely wrapped in the larger context of nostalgia for the ’80s and America’s war on drugs.”

Cameron Crowe’s sentimental and intermittently charming romcom Aloha, starring Bradley Cooper, Emma Stone, and Rachel McAdams, was one of the worst-reviewed films of the year. Still, the PG-13 film has beautiful people, a Hawaiian setting, and Bill Murray in a supporting role, and your Cable On Demand rental comes with a bonus gag reel. Also on Blu-ray and DVD and at Redbox.

White God (2014), Hungary’s official submission to the 2015 Academy Awards, is a canine revenge fantasy set on the streets of Prague, where the neglected and abandoned dogs (including the loyal pooch of a loving girl thrown out by an uncaring father) form a pack and revisit the humans who have done them wrong. This is not one for the kids. Hungarian with English subtitles. R for language and bloody imagery. Queue it up.

Jauja (2014), from Argentina, is a dreamy historical drama with Viggo Mortensen (speaking Danish) as an engineer searching for his runway daughter in the bandit-infested pampas. Danish, Spanish, and French with English subtitles. No rating, features some violence. More at Stream On Demand here or just queue it up.

Byzantium (2012), an inventive twist on the vampire myth from filmmaker Neil Jordan (a director with a passion for reworking fairy tale and myth), is a Gothic horror in a seedy present day setting. Gemma Arterton and Saoirse Ronan star. Rated R for blood, violence, language and sexual content. More at Stream On Demand or just queue it up.

More streaming TV: Once Upon a Time: Season 4 brings “Frozen” into Storybrooke’s fairy tale world (joining Peter Pan and Robin Hood and the Disney movie heroes and villains). Queue it up.

The CBS workhorse NCIS: Season 12 – still the top-rated scripted drama on TV – keeps investigating military-related crimes (queue it up), and NBC’s Law & Order: Special Victims Unit – Season 16, the last of the L&A shows still in production, crosses over with Dick Wolf’s new franchise shows Chicago Fire and Chicago P.D. (neither of which are currently on Netflix). Queue it up.

All three arrive a month before the new season debut on TV so there’s plenty of time to catch up.

Revenge: Season 4 is also the final season of the glossy nighttime soap opera about beautiful people doing bad things. Queue it up.

Girl Meets World: Season 1, the next generation of the nineties sitcom, features the school sweethearts Cory and Topanga (Ben Savage and Danielle Fishel) married with a daughter (Rowan Blanchard) of their own in school. Originally made for the Disney Channel, it’s for teens and tweens. (Queue it up.) And for the elementary school set there’s the Netflix original “Inspector Gadget: Season 2.” Queue it up.

Timbuktu (2014), Abderrahamane Sissako’s Oscar-nominated drama from the African nation of Mauritania, takes on religious fundamentalism in the story of self-proclaimed jihadists who take over titular city in Mali and impose their version of Sharia law on the diverse population (which they selectively ignore when it comes to their own conduct). It’s a satire with a gentle touch when it comes to individual behavior and an unblinking acknowledgement of the brutal reality of such hardline religious militancy. While the gun-toting jihadists play moral police in the city, a farmer (Ibrahim Ahmed) living outside the city is pulled into their unforgiving justice after a dispute with a neighbor. The images are beautiful and the drama is provocative and pointed. In French, Arabic and English with English subtitles. PG-13 for scenes of violence. Add to watchlist.

Teenage Mutant Ninja Turtles (2014), the live-action reboot of the ever popular heroes in the half shell, is produced by Michael Bay and stars Megan Fox and Will Arnett with the CGI heroes. PG-13 for sci-fi action violence. Add to watchlist.

Grantchester, set in a picturesque village near Cambridge in the early 1950s, teams up Vicar James Norton with detective Robson Green to solve murders the British TV mystery way. Six episodes. Read more at Stream On Demand or just add to watchlist.

The cable TV series Fargo: Season 1 isn’t exactly a spin-off of the movie and it’s not from the Coen Brothers, but it captures their sensibility and morbid sense of humor and features a terrific cast that includes Billy Bob Thornton, Martin Freeman, Colin Hanks, and Allison Tolman, the TV discovery of 2014. Watch it here.

CSI: Crime Scene Investigation: Season 15 features another season of solving crimes in sin city with state-of-the-art forensics and the darkest laboratory on TV. Watch it here.

Dumb and Dumber To, which reunites Jim Carrey and Jeff Daniels decades after the original hit comedy, is HBO’s new movie of the week. At HBO here.

The Knick: Season One, from HBO’s sister channel Cinemax, is available to HBO subscribers for a limited time through HBO Go, HBO Now, and HBO On Demand. More at Stream On Demand here.