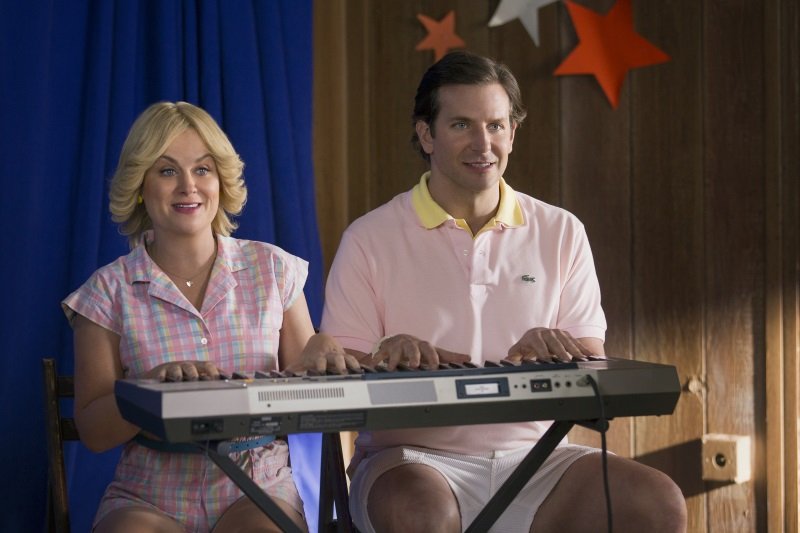 In the Netflix original comedy mini-series Wet Hot American Summer: First Day of Camp (2015), creators David Wain and Michael Showalter reunite almost the entire original cast from their 2001 movie, a spoof of summer camp movies with a cast of performers decades past their teenage years. The movie played out on the last day of camp. Which makes the Netflix show a prequel of sorts, with an even older cast playing at teen shenanigans.

The film wasn’t a hit but it developed a cult following over the years on home video, not the least for its line-up of comic stars, many of whom have gone on to very successful careers, like Elizabeth Banks (the Hunger Games movies), Bradley Cooper (The Silver Linings Playbook), Amy Poehler (Parks and Recreation), and Paul Rudd (Ant Man).

It’s sort of like a summer camp for comedy actors.

You can also revisit the original 2001 film at Netflix now. Queue it up!

For more on the film, the cast and creators talk to Newsweek.

Home, an animated comedy about a misfit alien (voice of Jim Parsons) and an adventurous human girl (Rihanna) on an interstellar journey to find their respective homes, offers PG-rated fun for young kids. Also on DVD and Blu-ray.

The Water Diviner is a passion project from Russell Crowe, who directs and stars as an Australian farmer who travels to Turkey to look for his three sons, who went missing after fighting in the Battle of Gallipoli in World War II. Rated R for war violence. Also on DVD and Blu-ray.

White God, Hungary’s official submission to the 2015 Academy Awards, is a canine revenge fantasy set on the streets of Prague, where the neglected and abandoned dogs (including the loyal pooch of a loving girl thrown out by an uncaring father) form a pack and revisit the humans who have done them wrong. Not for kids, this is R for violent imagery. Also on DVD and Blu-ray.

Available same day as select theaters nationwide is A LEGO Brickumentary, a documentary on the classic building toy system narrated by Jason Bateman and featuring a kid-friendly G-rating, and Jenny’s Wedding, a comedy Katherine Heigl and Tom Wilkinson.

The coming-of-age comedy Staten Island Summer has its own take on the wet, hot American summer. These high school buddies work as lifeguards at an outdoor swimming pool in their last summer before college, where they have one last blast of teenage fun. It features a raft of “Saturday Night Live” cameos, not that surprising as it was written and directed by SNL veterans. It splashes down on Netflix a week after debuting in select theaters. It’s R for all the reasons you’d expect. Queue it up.

The Wrecking Crew profiles the great Los Angeles studio musicians who supplied the soundtrack of the sixties and created the West Coast sound without receiving their due credit. If you like stories behind the songs, this is for you, plus it has an amazing score. Reviewed on Stream On Demand here.

Downton Abbey heartthrob Dan Stevens is the mysterious visitor in The Guest (2014). He’s a soldier who insinuates himself with the family who lost a son in the Iraq war, but there’s more to this quiet, polite, intense young man than meets the eye. Queue it up.

For the kids there are new seasons of three animated shows: the Netflix original series Turbo Fast: Season 2 (queue it up) plus the cable series My Little Pony: Friendship Is Magic: Season 5 from Hub (queue it up) and Marvel’s Hulk and the Agents of S.M.A.S.H.: Season 2 from Disney XD (queue it up).

Entourage: The Complete Series is binge-watch fodder for folks who want to vicariously enjoy a movie star fantasy. Adrian Grenier is all easy charm and offhanded generosity as Chase, the show’s poster boy for fame and fortune, but Kevin Connolly is arguably the real star of the story as the best friend and brain trust Eric, while dozens of stars and movie celebrities cameo as themselves. It also plays the whole trip as a testosterone fantasy of fame, wealth, sex, and surface risks with little on the line but easy money and temporary reputations. The consequences of bad behavior and professional rebellion are short lived and everyone—at least the guys, anyway—lives successfully ever after. All eight seasons and 96 half-hour episodes of the show are now available. Add to watchlist.

Behind the Candelabra (2013), Steven Soderbergh’s take on the queasily strange but true story of Scott Thorson, Liberace’s love-in lover and boy-toy (and, creepily enough, his adopted son) for five years, won 11 Emmy Awards. Reviewed on Stream On Demand here.

SNL alums and offscreen buddies Kristen Wiig and Bill Hader are The Skeleton Twins (2014) in the spiky comedy of dysfunctional adult siblings. Add to watchlist.

Magician: The Astonishing Life and Work of Orson Welles, Chuck Workman’s documentary on the legendary filmmaker, is a brief but entertaining trip through an amazing career. Reviewed on Stream on Demand here.