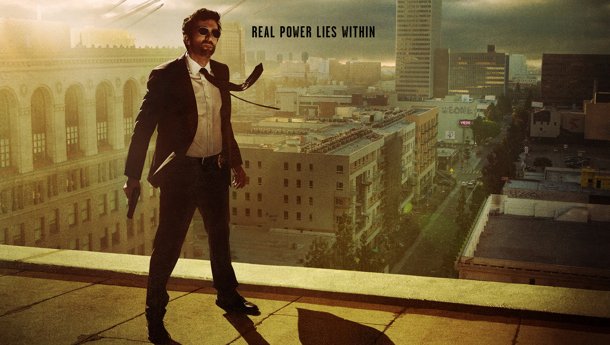 The PlayStation Network is now in the original programming game and they launched their first series this week. Based on the comic book by Brian Michael Bendis and Michael Avon Oeming, “Powers” is a superhero series as seen through the eyes of the cops who police the super-powered beings, with Sharlto Copley as Detective Christian Walker and Susan Heyward as his new partner Deena Pilgrim. It’s set in a culture where the Powers are the media celebrities and the show is aimed specifically at gamers. You can see the first episode on YouTube but you need a PSP and a PlayStation subscription to watch the rest of the series. Based on the pilot, which is awkward and unfocused and frankly looks cheap, I’m not about to invest in a subscription just to see if it gets better, but it doesn’t cost anything to judge the first episode for yourself. New episodes debut each Tuesday through April. Watch it.

“Cymbeline” updates one of Shakespeare’s less familiar plays into a modern-day war between an outlaw biker gang and corrupt cops. Ethan Hawke, Ed Harris, Milla Jovovich, and “50 Shades” star Dakota Johnson speak Shakespeare’s lines in black leather. It debuts on video-on-demand the same day it opens in select theaters and is rated R.

Also arriving same day as theaters is the fantasy comedy “The Cobbler“ starring Adam Sandler as a New York shoe repairer who can transform into his customers when he walks in their shoes. This PG-13 comedy, which was written and directed by Tom McCarthy (of “The Station Agent” and “Win Win”), was poorly received when it debuted at the Toronto Film Festival last year.

“Cesar Chavez,” directed by Diego Luna (star of “Y Tu Mama Tambien” and “Elysium”) and starring Michael Pena as the Mexican-American union activist who fought for fair wages and better working conditions for agricultural workers in the California in the 1960s, opened to mixed reviews, but its passion for its subject and commitment to social justice is evident. America Ferrara and Rosario Dawson co-star and John Malkovich, Micheal Cudlitz, Gabriel Mann, and Wes Bentley represent the forces of oppression. Rated PG-13

The animated “How to Train Your Dragon 2” lost out on the Oscar for best animated feature this year but many thought it superior to the winning film, “Big Hero 6.” This colorful adventure has exhilarating flying sequences, adorable animated dragons, and a cast of eccentric Vikings supporting a story about family and loss and it is a family friendly PG. Watch it / cue it up.

“Force Majeure,” Sweden’s official entry for the foreign language film category and a Cannes film festival winner, did not place among the final five nominated films of the recent Academy Awards but it was equally deserving as any of them, and more than some. It takes place during a family ski vacation where an apparent avalanche, while ultimately harmless, spurs an unexpected response from the husband (Johannes Kuhnke), who fails again and again to muster the proper response of a caring, protective husband and father. It’s both funny and painful as the wife’s indignation leads to a kind of public shaming, a scene of social awkwardness spiked with discomforting laughs. Director Ruben Östlund doesn’t judge. He’s more interested in questioning the expectations and obligations and starting a discussion that audiences can carry on after the film ends. Swedish (with some English and French dialogue) with English subtitles. Watch it/ cue it up.

“Life of Riley” the final film from the director (he passed away in 2014, a few months after the film’s debut), is his third adaptation of British playwright Alan Ayckbourn and a pleasant frivolity that mixes bedroom farce (without the bedrooms), romantic comedy, and theatrical conventions. It’s set in rural Britain and revolves around rehearsals of an otherwise unseen community theater production and Resnais stages it in stylized, abstracted sets with hanging strips of heavy cloth as backdrops and draws exaggerated, stage-like performances from his actors, calling attention to the contrivances and conventions. It’s not necessarily a successful device but it is inventive and playful and it has a great cast of iconic French stars, including Resnais regulars Sabine Azéma, Hippolyte Girardot, Sandrine Kiberlain and André Dussollier. In French with English subtitles, no rating. Watch it / cue it up.

Binge watch: You can catch up with “Glee: Season 5,” the penultimate season of the musical dramedy, and the animated farce “Archer: Season 5,” also known as “Archer: Vice,” which transforms the private spy agency into a drug cartel running out of South America. Which works just about as well as can be expected from these clowns.