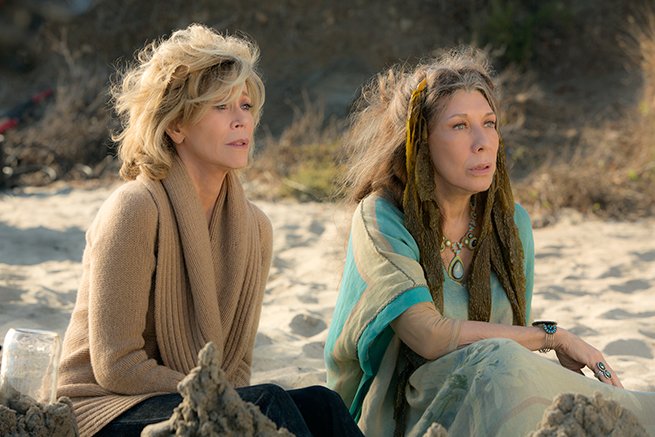 Jane Fonda and Lily Tomlin reunite for the first time since “9 to 5” for the new Netflix original series “Grace & Frankie.” They play old friends who turn to each other for support when their husbands (Sam Waterston and Martin Sheen) reveal their secret love affair and announce that they are getting married. It’s from “Friends” creator Marta Kaufman and “Home Improvement” producer Howard J. Morris. All 13 half-hour episodes of the senior citizen sitcom are now available. Alessandra Stanley, reviewing the series for The New York Times, calls it “funny and sometimes even touching.” Queue it up.

Academy Award nominee “Selma,” a powerful drama about the landmark 1965 march through Alabama to demand voting rights for African American citizens, humanizes American history with an intelligent portrait not just of Dr. Martin Luther King (played with understated grace and dignity by David Oyelowo) but of the entire community in the civil rights movement and of the politics of protest. It won the Oscar for Best Original Song. It’s PG-13 for violence and adult subject matter. Also on Blu-ray, DVD, and VOD rental through iTunes, Amazon, Vudu, and Xbox Video. Reviewed here.

“Mr. Turner,” Mike Leigh’s beautiful but unconventional portrait of the great British landscape painter J.M.W. Turner (played by Timothy Spall as a kind of beast with the heart of a poet), was nominated for four Oscars and should have won for Dick Pope’s astounding cinematography, which captured the light and color of Turner’s paintings. It can be hard to follow the story at times but its presentation of a painter at work is superb. Rated R. Also on Blu-ray, DVD, and VOD rental through Amazon, Vudu, and Xbox Video. Reviewed here.

The notorious “Fifty Shades of Grey,” the decidedly R-rated romantic an innocent young woman (Dakota Johnson, daughter of Melanie Griffith and Don Johnson) introduced to the world of bondage and sado-masochistic play by a handsome billionaire (Jamie Dornan) with very singular tastes, is now available for home viewing in an unrated version.

If your tastes run to offbeat comedy with a deadpan absurdity, however, I’d recommend “What We Do in the Shadows,” a comedy about a clan of ancient European vampires in Wellington, New Zealand. Think “Big Brother” in a shabby dump with immortals who have resigned themselves to mundane routines and arguments over household chores. Shot as a mockumentary by directors / writer / stars Jemaine Clement and Taika Waititi, it proposes that centuries of unlife doesn’t make the undead any smarter. It comes to Cable On Demand and video on demand weeks before disc. Rated R.

The new the R-rated Kristen Wiig comedy “Welcome to Me” is available to view at home the same day it opens in theaters.

Also new: the family drama “Black or White” with Kevin Costner and Octavia Spencer (PG-13), Michael Mann’s sleek cyber-thriller “Blackhat” with Chris Hemsworth (rated R), and the family-friendly documentary “I Am Big Bird: The Caroll Spinney Story,” about the man who played the iconic “Sesame Street” character for more than 40 years.

Tommy Lee Jones is “The Homesman,” a “no account drifter” saved from a lynching by a tough, capable settler (played by Hilary Swank) in exchange for his help in transporting three women (Grace Gummer, Miranda Otto, and Sonja Richter) driven mad by life on the frontier to sanctuary in a town hundreds of miles away. Overlooked when it was released in 2014, this powerful, elemental, at times tragic frontier drama deserves a second look. Read more at Stream on Demand here or just queue it up.

“Winter Sleep,” Turkey’s entry for the Foreign Language category of the recent Academy Awards, won the Palm d’Or at the 2014 Cannes Film Festival. Directed by Nuri Bilge Ceylan, it’s a three-plus hour drama set in a small, isolated hotel in the mountains of central Turkey, where small, seemingly insignificant actions set off a cascade of dramatic consequences. It’s in Turkish with English subtitles. Arrives on Netflix the same week it’s released on Blu-ray and DVD. Queue it up.

New non-fiction this week: “Anita,” a portrait of Anita Hill directed by Oscar-winning documentarian Freida Lee Mock (queue it up), and “Meet the Mormons,” a portrait of six members of the Church of Jesus Christ of Latter Day Saints produced by the church (queue it up).

Netflix has five new episodes of their animated series “The Adventures of Puss in Boots” featuring with swashbuckling kitty. Queue it up.

It’s a little early but both Netflix and Amazon Prime have Tyler Perry’s 2013 holiday comedy “A Madea Christmas.”