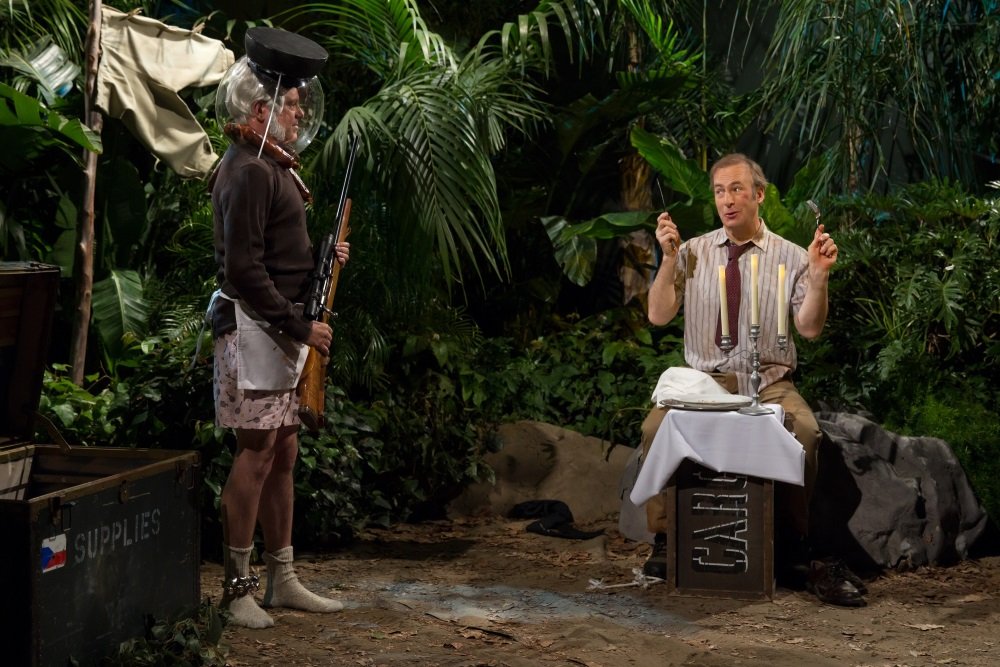 W/ Bob and David: Season 1 (Netflix Original) reunites Bob Odenkirk and David Cross for a new skit comedy show in the spirit of Mr. Show, the series they created, write, and starred in for HBO for four seasons in the nineties. In the 17 years since the series ended, the stars have gone on to successful careers in their own right as have many of the young comics who popped up in various shows in support. Many of those co-conspirators—Mary Lynn Rajskub, Paul F. Tompkins, Brian Posehn—are back for the new series, which debuts with a short season of four episodes.

“Without spoiling the brief season, I found the new sketches polished, if unsurprisingly hit and miss,” writes New York Times TV critic James Poniewozik. “If the new series feels a bit less distinctive, it’s only in the way of so many ultimately vindicated pioneers: By now, it’s inspired many successors operating on many platforms…. Still, if sketch comedy now has more tributaries and more ways to stream, it’s no less fun, in W/ Bob & David, to paddle back to the source.”

Mr. Holmes stars Ian McKellen as the iconic detective in retirement at age 93, trying to recall his fateful final case while tending his bees and facing his greatest challenge ever: old age and memory loss. McKellan brings out the fragility and vulnerability behind the imperious manner and Laura Linney co-stars. Rated PG. Reviewed on Stream On Demand here.

Amy Schumer takes her act to the big screen in the raunchy and hilarious Trainwreck, playing a foul-mouthed, binge-drinking professional more interested in sex than romance. It’s sweet and saucy and earns its R rating. Also available in a longer unrated edition. Reviewed on Stream On Demand here.

Also new this week: the heavy metal sequel Terminator Genisys with Arnold Schwarzenegger and Emilia Clarke (PG-13, also in 3D on some systems), the sci-fi thriller Self/less with Ryan Reynolds, and the acclaimed indie comedy Tangerine, which was shot entirely on iPhone (R).

Available same day as select theaters nationwide is Heist with Robert De Niro and Jeffrey Dean Morgan (R) and Shelter with Jennifer Connelly and Anthony Mackie as a homeless couple on the streets of New York City (no rating).

Joe Wright’s lush adaptation of Leo Tolstoy’s Anna Karenina (2012) plays out largely in a 19th-century theater, where the action unfolds not just on stage, but in the wings, in the balconies, and even on the floor, where seats are cleared out and sets moved in as necessary. One might suppose it’s intended as a comment on a life lived as a public performance, but mostly it distracts from the complicated story of tragic, obsessive love. Keira Knightly plays Anna, who defies convention to be with her dashing soldier lover Vronsky (Aaron Taylor-Johnson) and Jude Law is her idealistic reformer husband. It picked up four Oscar nominations, all in the craft categories that period pieces usually get: costumes, sets, cinematography, and music. Rated R. Queue it up.

The documentary The Wolfpack (2015) presents the story of Angula brothers, raised in isolation by immigrant parents in a New York apartment with only movies to teach them about the outside world. When one of the boys makes an escape, their isolation is over and social education begins. R. Queue it up.

More non-fiction: The Prince of Pennsylvania (2015), made for ESPN’s 30 for 30 series, profiles the story of multimillionaire John DuPont and his obsession with the Olympic wrestling brother Mark and Dave Schultz that ended in murder and imprisonment (queue it up), and Ken Burn’s documentary miniseries The Roosevelts: An Intimate History uses the lives and accomplishments of Theodore, Franklin, and Eleanor Roosevelt to explore the political and social history of America from the turn of the century to World War II. Queue it up.

The mini-series Wolf Hall, starring Mark Rylance as Thomas Cromwell, advisor to King Henry VIII, is a handsome BBC production that sidesteps melodrama and spectacle for a nuanced look at how power is negotiated behind the scenes. Reviewed on Stream On Demand here or simply add to watchlist.

The documentary The Outrageous Sophie Tucker profiles the vaudeville superstar with celebrities like Barbara Walter, Carol Channing, and Tony Bennett singing her praises and noting her influence. Add to watchlist.

Vikings: Complete Season 3 sends the Scandinavian raiders of the History Channel’s original dramatic series (their first) to the New World. See it here.

Getting On: Season 3, the final season of HBO’s comedy of life in a geriatric care facility and the bureaucratic maze of the health care system, is now underway.

Unfinished Business with Vince Vaughn and Dave Franco is new, and arriving Saturday night is the action thriller Run All Night with Liam Neeson (R) and the concert presentation U2: iNNOCENCE + eXPERIENCE Live in Paris.

The Carol Burnett Show has launched its own official YouTube Channel. It kicks off with more than 20 full-length sketches from the show featuring Burnette, Harvey Korman, Tim Conway, Vicki Lawrence, and Lyle Waggoner, with more to be added each week. See the available sketches here.