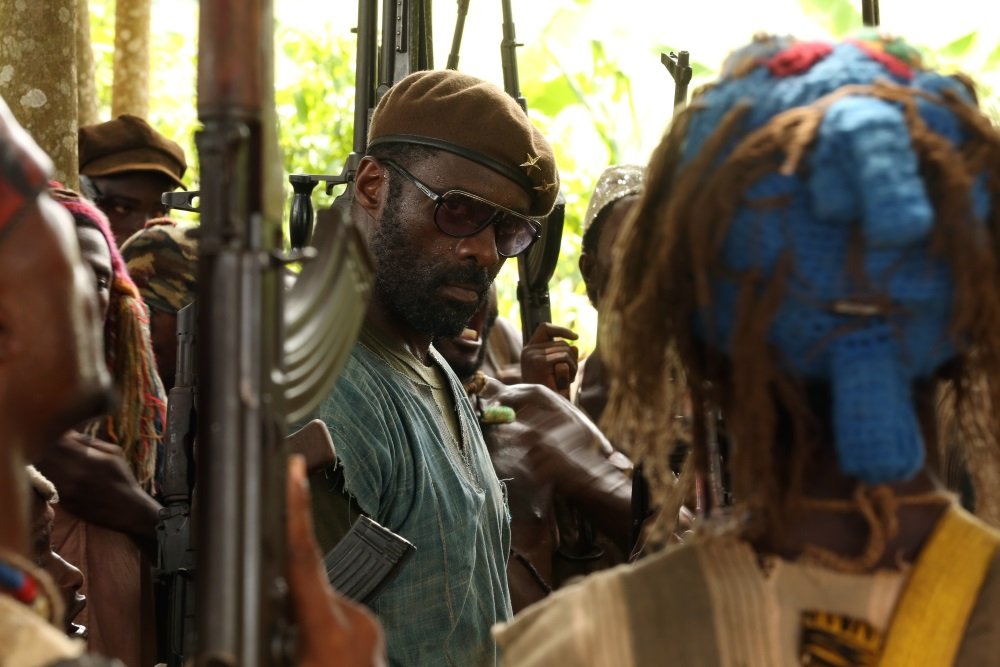 Beasts of No Nation, the harrowing drama of a child soldier in West Africa, is directed by Cary Fukunaga (who helmed the first season of True Detective) and stars Idris Elba as a brutal rebel leader. It earned rave reviews on the film festival circuit earlier this year and was snapped up by Netflix, which is releasing it in select theaters nationwide the same day it debuts online (making it eligible for the Oscars).

“Needless to say, this is not easy viewing, though [director Cary] Fukunaga (who also directed a recent Jane Eyre and the first season of HBO’s True Detective) is careful to imply more horror than he shows,” writes A.O. Scott in The New York Times. “Seeing it for the first time on a big screen, I was caught up in the chaos of combat and the feverish pace of the story. But the second time, in the quiet of my house, I was struck by the hallucinatory, fairy-tale quality of some of the images and also by the sense that I was watching a character study rather than a topical drama.”

It’s not rated but be prepared for explicit violence perpetrated by and on children. Queue it up!

It’s Dwayne Johnson versus the earthquake that rocked America in San Andreas, a PG-13 disaster movie that features the former wrestler as a chopper pilot determined to save his ex-wife (Carla Gugino) and their college-age daughter from topping buildings and tidal waves caused by the big one. Find your provider here.

Tomorrowland, the latest movie sort-of-based on a Disneyland attraction, pits George Clooney and Britt Robertson against robots from the future and an impending apocalypse. It’s a straight PG for sci-fi action (those robots, you know) and peril.

Available same day as select theaters nationwide is Experimenter starring Peter Sarsgaard as the social psychologist whose experiments in human behavior shocked America (PG-13), the thriller Momentum with Olga Kurylenko and Morgan Freeman (R), and the horror films The Diabolical (no rating, mature audiences) and Tales of Halloween (R).

Glen Campbell: I’ll Be Me (2014) profiles the music legend on his final tour as he struggles with Alzheimer’s disease, which he and his family discuss openly and frankly. He can’t always remember the lyrics but he sure remembers how to play guitar. Queue it up.

Mark Duplass, Olivia Wilde, and Donald Glover star in Lazarus (2015), a horror film about a serum that can resurrect the dead. Yeah, like that’s going to end well. Queue it up.

Jane the Virgin: Season 1, the sunny, funny, clever American take on the telenovela, starring Golden Globe-winner Gina Rodriguez as a single young woman accidently artificially inseminated with a sample meant for someone else, was one of the breakout hits of last season. Reviewed on Stream On Demand here or just queue it up.

For the kids, there are new episodes of the Netflix originals shows Some Assembly Required: Season 2, about a kid who runs a toy company (queue it up), and the animated All Hail King Julien: Season 2 (queue it up).

The Royals: The Complete First Season, the E! Channel’s spoof of high society soap operas and aristocratic bad behavior, stars Elizabeth Hurley as the scheming Queen of England in a fictional, scandal-ridden royal family and Vincent Regan as the king who plans to abolish the monarchy. Add to watchlist.

Eugene Levy and Catherine O’Hara are millionaires who lose it all and land in Schitt’s Creek: Season One in the Canadian sitcom. Add to watchlist.

Mad Monster Party? (1967), an animated comedy that goofs on the classic movie monsters, is a Halloween movie for little kids and adults with a nostalgic streak. It’s got rock and roll and the voice of Boris Karloff. Add to watchlist.

Now available to subscribers: the con-artist film Focus (2015) with Will Smith (more here).

Coming Saturday, October 17 is Taken 3 with Liam Neeson framed for the murder of his wife (more here).

Paramount has 150 films, classic and contemporary both, available for free on its Paramount Vault You Tube Channel.