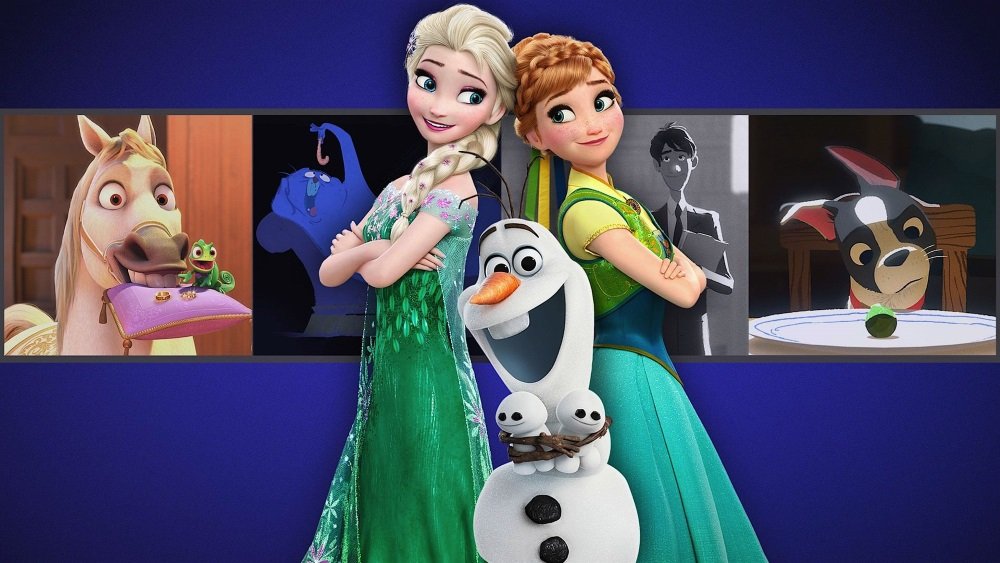 Netflix has Walt Disney Animation Studios Short Films Collection: a dozen mostly recent cartoons, including the inventive Get a Horse! with Mickey and Minnie traveling from the early Disney days into the 21st century, a pair of Oscar-winning shorts (Paperman and Feast), and the brand new Frozen Fever featuring the characters from Frozen, for all those kids who just can’t let it go. All are family friendly. Queue it up!

Looking for Halloween recommendations? Check out my Halloween picks on Stream On Demand.

Southpaw rolls all of the “Rocky” movies into a single film with Jake Gyllenhaal as a hot-headed boxer, Rachel McAdams as the wife that grounds him, and Forest Whitaker as the philosophical trainer who rebuilds him after a tragic fall. There’s not a cliché left untouched but Gyllenhaal is all passion in the role. R for language and violence. Also on Blu-ray and DVD, and from iTunes, Amazon Prime, Vudu and other VOD services.

Adam Sandler leads a team of video gamers protecting the Earth from space invaders in Pixels. It’s PG-13 because Adam Sandler can’t help himself. Also in 3D in some systems.

Also new: the revenge thriller The Gift with Jason Bateman and Joel Edgerton (R) and the family drama Max about a trained military dog reconnecting to stateside life (PG).

The Gunman features Sean Penn trying out the aging action hero thing as a retired mercenary whose past has come back for revenge. R for violence. Queue it up.

August: Osage County (2013), the screen adaptation of the Pulitzer Prize-winning play by Tracy Letts, picked up Oscar nominations for stars Meryl Streep and Julia Roberts. R for language. Queue it up.

Popples: Season 1 is a brightly-colored animated series for young children. Queue it up.

Foreign affairs: Norwegian filmmaker Bent Hamer’s 1001 Grams is an offbeat romantic drama in the world of science and cold, hard facts (queue it up) and the Mexican road movie comedy Gueros follows three kids in search of a rock star (queue it up).

New documentaries on Netflix include Famous Nathan, about the founder of Nathan’s Famous hot dog empire (queue it up), and The Great Museum, an Austrian film that takes the viewer behind the scenes of the Kunsthistorisches Museum in Vienna (queue it up).

I don’t actually recommend any of those films. If you’re looking for Halloween picks, I’ve got a bunch across all streaming services at Stream On Demand here.

Danny Collins (2014) is a marvelous redemption tale with Al Pacino as a rock legend who drops out to reconnect with the adult son (Bobby Cannavale) he’s never met. R for rock star excess. Reviewed on Stream On Demand or just add to watchlist.

Tom at the Farm (2013) is a French-language psychological thriller from Quebecois filmmaker Xavier Dolan. Unrated but with mature material. Add to watchlist.

The 100-Year-Old Man Who Climbed Out the Window and Disappeared, the highest-grossing Swedish film of all time, follows the comic adventures of a centenarian who flees his nursing home. In Swedish with English subtitles. Add to watchlist.

And for the wee ones there is Curious George: Season 9 offering more humorous life lessons with a side of monkey. Add to watchlist.

The Canadian crime comedy 24 Hour Rental, set at a video store run by a disgraced mob boss (Romano Orzari) as a front for shady activity, makes its U.S. debut as a Hulu exclusive. I can’t I much liked it, but if you like your comedies dark, violent, and filled with foul language, this may be for you. All 13 episodes available to view. On Hulu here.

The documentary How to Dance in Ohio follows a group of developmentally challenged teenagers preparing for their first prom: a daunting challenge for people on the autism spectrum. See it here.

Jason Bateman uses a loophole to compete in the national spelling bee in the R-rated comedy Bad Words (2013). See it here.

Available on Halloween night are the recent horror films The Purge: Anarchy and The Pyramid, both rated R.

The documentary Why Horror? (2014) debuts on Halloween night.