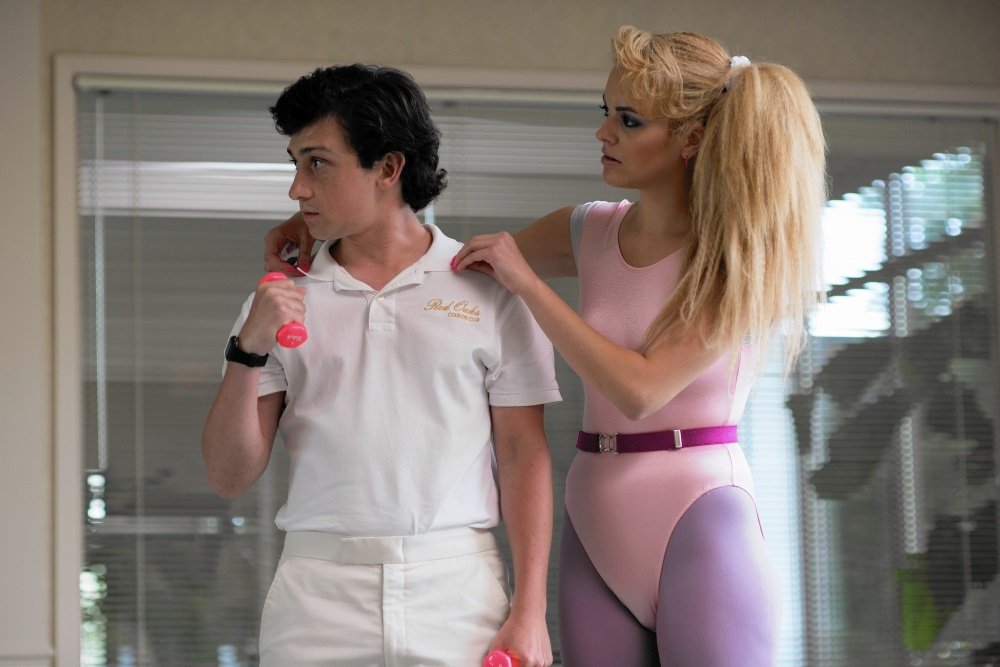 Red Oaks: Season 1, an Amazon original series created by Gregory Jacobs (director of Magic Mike XXL and longtime Steven Soderbergh producer) and Joe Gangemi, is a half-hour coming of age comedy set in the eighties as high school buddies have one last summer blow-out before college. Craig Roberts is our lead with a bright future. Headed to New York University, he’s got a summer job as a tennis pro at a New Jersey country club, where his girlfriend (Gage Golightly) is an aerobics instructor. Jennifer Grey (an actual icon of eighties coming of age movies) and Richard Kind play his parents and Ennis Esmer and Paul Reisner co-star.

“The work they do together — and this goes for everyone here — is more delicate than the outlines of the show might suggest,” writes Robert Lloyd for The Los Angeles Times. “You’re never completely unaware of the artifice, but the series feels very alive nevertheless, as it moves in and out of the tropes, embracing some, avoiding others.”

Steven Soderbergh is an executive producer and David Gordon Green directs the first episode (which was previously available for free), but it’s worth noting that other directors include Amy Heckerling (Fast Times at Ridgmont High) and Hal Hartley (the first ongoing series he’s worked on his defiantly independent career).

Channing Tatum reunites the boys for a male stripper convention in Magic Mike XXL. It’s a buddy comedy, a road movie, and a story about teamwork and following your artistic impulses, all in a film about beefy guys (Matt Bomer and Joe Manganiello co-star) who take their clothes off in elaborately-choreographed performances. No surprise that this is rated R but there is no explicit nudity. Reviewed on Stream on Demand here.

When Marnie Was There, a touching, family-friendly ghost story from Japan’s Studio Ghibli, is a lovely work of hand-drawn animation with an English language soundtrack. PG. Reviewed on Stream on Demand here.

Me and Earl and the Dying Girl, based on the young adult novel by Jesse Andrews, is a different kind of coming-of-age drama. While it’s a little frustrating that it focuses on the outcast boy (Thomas Mann) over the dying girl (Olivia Cooke), it is a sweet movie with both humor and loss. PG-13. Order it here on Movies On Demand for cable, also on VOD from Amazon Video, Vudu, Flixster, CinemaNow, and other VOD vendors.

Also new: the documentary Batkid Begins (PG), action film Blunt Force Trauma with Mickey Rourke and Freida Pinto (no rating), and the foreign films In the Courtyard from France with Catherine Deneuve (R) and A Pigeon Sat on a Branch Reflecting on Existence from Sweden (PG-13).

American Horror Story: Freak Show, the fourth season of the cable horror series, is on both Amazon and Netflix, and it may be just the show to get you in the mood for Halloween. Add to watchlist on Amazon or queue it up on Netflix.

If you’re looking for something Halloween-y that is more kid friendly, you might try Mad Monster Party? (1967), a musical stop-motion monster mash comedy from Rankin and Bass, the team behind all those goofy Christmas specials of the sixties, and featuring the voice of Boris Karloff as your host. Add to watchlist.

The Flash: Season 1 is the most fun you’ll have with a live-action superhero TV series. Buoyant and colorful, self-aware without becoming self-parody, it is a zippy show with a likable, excitable hero (well done, Grant Gustin), a loyal support team, and crazed supervillains, all in a family-friendly show. This is superhero TV you can watch with the kids. Reviewed on Stream On Demand here, or just queue it up.

For the kids, Netflix presents The Mr. Peabody and Sherman Show: Season 1, a new original animated series that transforms the 1960s cartoon into a modern talk show with historical guests and occasional trips in the WABAC machine. It’s history with humor. Queue it up!

The new documentary Winter on Fire, also a Netflix Original production, casts its lens on the unrest in Ukraine in 2013 and 2014 that grew into a revolution. No rating. Queue it up.

Casual, a comedy produced by Jason Reitman (Juno), who also directs the first two episodes, and starring Michaela Watkins, is Hulu’s newest original series and it’s getting great reviews. Two episodes are now available for subscribers and new episodes debut every Wednesday. Check it out here.

The Leftovers: Season 2, the metaphysical drama of life after an inexplicable event created by Damon Lindelof (Lost) and novelist Tom Perrotta (Little Children), is back with new episodes and hope for a fresh start. More here.

Two of Showtime’s most acclaimed original series are back. The debut episodes of Homeland: Season 5 with Emmy-winner Claire Danes (more here) and The Affair: Season 2 with Dominic West and Ruth Wilson (more here) are now available to stream. Both feature adult material.

Doc Martin: Series 7, the newest season of the British series starring Martin Clunes as an acerbic country doctor, premieres exclusively on Acorn TV before it comes to PBS.

Also exclusively on Acorn TV is the classic British series Ruth Rendell Mysteries, an anthology that ran from 1987 through 2000. There are eight feature-length stories currently available to stream.