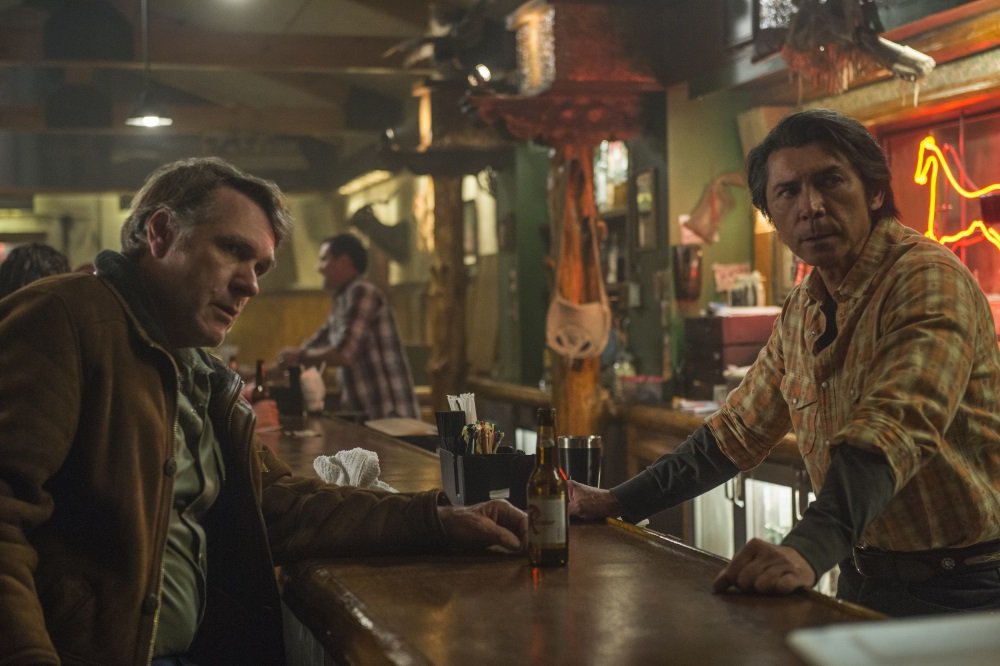 Longmire: Season 4 is the third instance of Netflix coming to the rescue of a TV series. Cancelled last year despite good ratings and a passionate following on A&E, the modern western crime drama set in rural Wyoming and starring Australian actor Robert Taylor as laconic Sheriff Walt Longmire now returns with new episodes. I revisited the first three seasons for Stream On Demand.

Mike Hale on Season Four for The New York Times: “The bargain with a show like this is that in return you get a certain level of realistic emotion and camaraderie, that it’s what critics call “lived in,” and Longmire delivers, especially in the relationship between Walt and Vic (Katee Sackhoff), the tough, mercurial female deputy. Among the hundreds of buddy-cop partnerships, theirs is one of the warmest and funniest, and they have one of the great unconsummated crushes on TV.”

The executive producers discuss the new developments of the show at Los Angeles Times: “there’s something beautiful and there’s some poetic justice in the fact that a character who doesn’t own a cellphone is now streaming on Netflix.”

Love & Mercy explores the life of Brian Wilson, the Beach Boy songwriter who turned surf music into psychedelic pop symphonies, from idealistic young visionary to his spiral into depression. An impressive and moving drama with Paul Dano and John Cusack as the two ages of Wilson and a superb Elizabeth Banks as the film’s hero. It’s PG-13 for language and drug use.

Suburbia meets the new sexual revolution in The Overnight, a racy comedy with Adam Scott and Taylor Schilling as easy-going parents and Jason Schwartzman and Judith Godrèche as adventurous neighbors who nudge them way past their comfort zones. R for nudity, drug use, and language.

Before winning an Oscar for A Separation, Iranian filmmaker Asghar Farhadi directed About Elly (2009), a comedy of manners that becomes an intimate, unsettling thriller when a young kindergarten teach goes missing on a family vacation and the search unravels friendships and marriages. Farsi with subtitles, unrated, parental guidance suggested. Queue it up.

Mia Wasikowska is Madame Bovary (2014) in the recent version of Gustave Flaubert’s romantic tragedy and Ezra Miller, Paul Giamatti, and Rhys Ifans co-star. Rated R for sexuality and nudity. Queue it up.

Christopher Nolan directs Insomnia (2002), a moody thriller of guilt in the 24-hour sunlight of Alaska with Al Pacino and Robin Williams. R for language and violence and brief nudity. Reviewed here or queue it up.

These films arrived earlier this month: Julia Sweeney’s one-woman show God Said Ha! (1999, PG-13) (queue it up), the German foodie romance Mostly Martha (2002, PG, with subtitles) (queue it up), and the zombie comedy Fido (2006, R) with Billy Connelly as a pet zombie. I review the latter here, or just queue it up.

Kumiko, The Treasure Hunter is a sweetly offbeat indie drama inspired by an urban legend about a young Japanese woman (Rinko Kikuchi) who flew to Minnesota in search of the money buried in the snow at the end the movie “Fargo.” Unrated, no violence, sex, or foul language. Reviewed here or simply add to watchlist.

The new documentary I Am Big Bird: The Caroll Spinney Story profiles the puppeteer who brought the Sesame Street character to life since 1969. Unrated, family friendly. Add to watchlist.

The Young and Prodigious T.S. Spivet (2015), an American fable from French filmmaker Jean-Pierre Jeunet (Amelie), is available to Prime members mere weeks after a token release in theaters by the Weinsteins, who apparently were upset that Jeunet wouldn’t make the cuts that Harvey requested. That’ll show him. The adolescent road movie is rated PG. Add to watchlist.

You may not know the name but if you like B-movies and drive-in pictures, you’ve seen That Guy Dick Miller. This documentary pays tribute to one of the busiest character actors of the last 60 years. No rating. On Hulu here.

The Awesomes: Season 3 offers new episodes of the animated superhero spoof, created for Hulu by Seth Meyers, arriving every Tuesday. On Hulu here.

Wild, adapted from the Cheryl Strayed memoir and starring Reese Witherspoon, is HBO’s new movie for the week. They feature a new one every Saturday night and it’s available to cable and streaming subscribers anytime after its cable debut. R for sexuality, nudity, drug use, and language. See it on HBO Now and HBO Go.