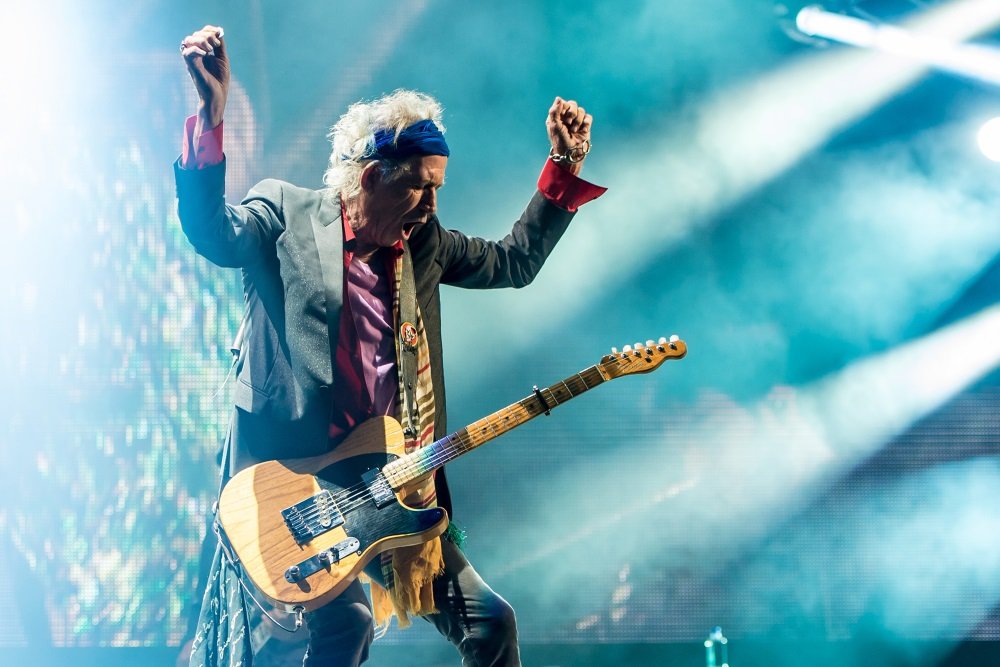 Keith Richards: Under the Influence profiles the Rolling Stones guitarist, songwriter, and rock legend at 71. The film is directed by Morgan Neville, who made the Oscar-nominated 20 Feet from Stardom (about the unsung back-up singers of rock and roll), and is built around footage of Richards in the recording studio (working on his first solo album in 23 years) and a series of on-camera interviews conducted for this documentary.

It debuts on Netflix a day after its world premiere at the Toronto International Film Festival and, not coincidentally, just as his solo album “Crosseyed Heart” drops. In fact, the project began as a short promotional piece to accompany the album, then grew over the course of the interviews. It’s Netflix’s second original documentary, after What Now, Miss Simone?

Neil Genzlinger reviews the film for The New York Times: “Is there such a thing as a mumblecore documentary? There is now, thanks to Keith Richards: Under the Influence, a frustrating film that has its premiere on Friday on Netflix.”

Furious 7 finds the action franchise of fast cars and outrageous stunts as wildly improbable and furiously entertaining as ever. PG-13 for violence, action, mayhem, and suggestive language. Also on Blu-ray and DVD. Reviewed on Stream on Demand here.

Disney’s live action remake of their classic animated fairy tale Cinderella, starring Lily James (of “Downton Abbey”) as Cinderella and Cate Blanchett as her stepmother, has a family friendly PG rating. Also on Blu-ray and DVD.

Time Out of Mind, starring Richard Gere as a homeless man on the streets of New York, arrives On Demand as it expands in select theaters (unrated, mature audiences).

Available same day as select theaters nationwide is the horror comedy Cooties with Elijah Wood and Rainn Wilson (R) and available a week before theaters is the thriller Pay the Ghost with Nicolas Cage (unrated).

Wes Anderson’s Moonrise Kingdom (2012), a sweet and playful tale of adolescent misfits and romantic runaways, is funny and full of nostalgic blasts of 1960s pop culture, but most of all it is an affectionate portrait of dysfunctional adults who are nudged into becoming better parents. Bill Murray, Frances McDormand, Edward Norton, and Bruce Willis lead the great cast. PG-13 for sexual situations and smoking. Reviewed Stream On Demand here or just queue it up!

Jason Statham stages The Bank Job (2008), a lively and entertaining heist film based on a real-life robbery. R for sexual content, nudity, violence and language. Reviewed on Stream On Demand here or just queue it up.

If you’re a fan of British mysteries and are looking for something new, try the Australian series Miss Fisher’s Murder Mysteries: Series 3 starring Essie Davis. She plays the thoroughly modern Phryne Fisher, a rich socialist in 1920s Melbourne with a nose for mysteries and a brash manner that allows her to crash every crime scene. All eight episodes of the third season are no available, as well as the first two seasons. The series is also available on Acorn TV. Queue it up!

More streaming TV: The Mysteries of Laura: Season 1 stars Debra Messing as a single mom who solves crimes while raising rambunctious twin boys (queue it up). There’s also the hipster comedy spoof Portlandia: Season 5 (queue it up), Call the Midwife: Series 4 from Britain (queue it up).

All six seasons of HBO’s Sex and the City are now available to Amazon Prime customers. It is, of course, also available on HBO Now and HBO Go. Add to watchlist.

Alps (2011), Greek director Yorgos Lanthimos’ follow up to his Oscar-nominated debut “Dogtooth,” is an offbeat project about a secret society that helps grieving people by (for a fee) posing as a recently-deceased member of a mourning family. Add to watchlist.

The Mindy Project: Season 4 premieres exclusively on Hulu, which picked up Mindy Kaling’s sitcom after Fox cancelled it. The new season kicks off with Mindy on the verge of motherhood. Hulu will release new episodes every Tuesday. Watch it here.

Will Ferrell played ten positions for ten different Major League Baseball teams in one day in March during basic training as a fundraiser for Cancer for College. The comic documentary Ferrell Takes the Field chronicles the stunt. See it here.

Also new on HBO: the revival of the reality series Project Greenlight from Ben Affleck and Matt Damon (see it here) and Doll & Em: Season 2 with best friends and co-creators Emily Mortimer and Dolly Wells (see it here).

HBO’s featured film of the week is Night at the Museum: Secret of the Tomb with Ben Stiller and friends. See it here.

Kristen Stewart is an American MP at Guantanamo in Camp X-Ray (2014), where she befriends a prisoner. R.