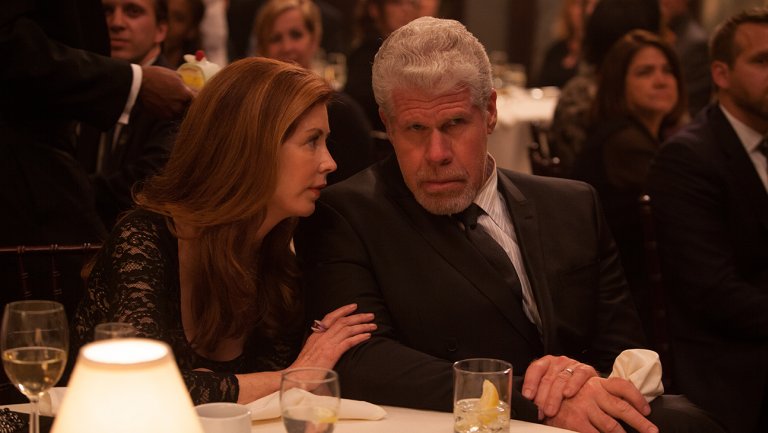 Hand of God, starring Ron Perlman as a corrupt judge who starts to believe he’s receiving instructions from God as he searches for the man who raped his daughter, joins the growing slate of Amazon Original Series. The series co-stars Dana Delany as his wife and Garret Dillahunt as an ex-con eager for redemption who becomes Perlman’s instrument of vengeance. Marc Forster (World War Z) directs the first few episodes. All ten episodes of the initial season are now available on Amazon Prime Video.

“If Amazon’s new vigilante drama Hand of God were a better show, Garret Dillahunt might be up for an Emmy this time next year,” writes Los Angeles Times TV critic Mary McNamara.

And at Entertainment Weekly, Jeff Jenson writes: “Hand of God is a confounding, sometimes infuriating, and poorly focused drama, but it’s too interesting to dismiss out of hand. Perlman is powerful and persuasive as the dishonorable Pernell Harris, and his character possesses a spirited hook.”

Thirty years after the last installment, director George Miller returns to the post-apocalyptic badlands with Mad Max: Fury Road, the most high-octane action blast of the 2015. Reviewed on Stream On Demand here.

Romance in the air: Blake Lively is ageless, eternal, and lonely in The Age of Adaline (PG-13) and Gemma Bovery reworks the classic Flaubert novel as a self-aware romantic comedy in the French countryside with Gemma Arterton (R). I’ll See You in My Dreams” with Blythe Danner and Sam Elliott makes sure that the AARP demographic isn’t left out of the romantic fun. (PG-13).

Available same day as select theaters nationwide is the documentary Steve Jobs: The Man in the Machine, beating the upcoming biopic with Michael Fassbender as Jobs by more than a month.

Also new: Robin Williams’s final role in the drama Boulevard (R) and the comedy The D Train with Jack Black and James Marsden.

It’s the first week of the month which means dozens of new arrivals. Here’s just a few highlights:

George Clooney is superb in Up in the Air (2009) as a professional hatchet man flying around the nation to fire employees for bosses who are too timid or intimidated to do it themselves. The premise is a timely as ever and Clooney, smoothly charming yet utterly impersonal behind his easy smile and unreadable eyes, shows us the trade-off for living without roots or relationships beyond a quick layover. More at Stream On Demand here, or just queue it up!

Joe Dante’s latest, Burying the Ex, is a rom-zom-com (who would have thought that would become a genre?) with Anton Yelchin and Ashley Greene. I arrives on Netflix a month after it arrived on DVD. Queue it up.

Streaming isn’t necessarily the best way to see David Lean’s epic Lawrence of Arabia (1962) but Netflix has just added the restored version of the Oscar-winning classic—all 227 minutes of it. Try to see this on as big a screen as possible. Queue it up. It’s also available on Amazon Prime Video.

Directed by Christopher Nolan and starring Al Pacino, Robin Williams, and Hilary Swank, Insomnia (2002), the American remake of the icy, sun-bright 1997 Norwegian noir, actually improves upon the original. Stream On Demand review here, or just queue it up.

Jessica Chastain is Miss Julie (2014) in Liv Ullman’s film of the August Strindberg play. Reviewed here, or just queue it up.

Big brother is watching you in Person of Interest: Seasons 1-3, a clever melding of surveillance conspiracy, urban action, cyber thriller, and spy show created by Jonathan Nolan (co-writer of his brother Christopher Nolan’s Batman films). It’s as good as network TV gets: dense, complex, with more smarts and heart than you might expect. “Season 4” follows on Netflix later this month. Stream On Demand review here, or queue it up.

The satirical comedy Dear White People takes on race, privilege, and prejudice at an Ivy League college with sharp, smart humor. It earned first-time filmmaker Justin Simien awards at Sundance and the Independent Spirit Awards. R for language, sexual content, and drug use. Add to watchlist.

Kill the Messenger stars Jeremy Renner as Gary Webb, the journalist who was targeted by a CIA smear campaign after he exposed their illegal activities arming the Contras in Nicaragua and importing cocaine in the U.S. to fund the program. See it on HBO services here.

Agatha Christie’s Partners in Crime, a new take on Christie’s Tommy and Tuppence novels starring David Walliams and Jessica Raine and set in 1950s England, makes its U.S. premiere on Acorn’s subscription streaming service. Two episodes now available, with a new episode every Thursday through October 1. You can watch the first episode free without a subscription. Check it out at Acorn here.